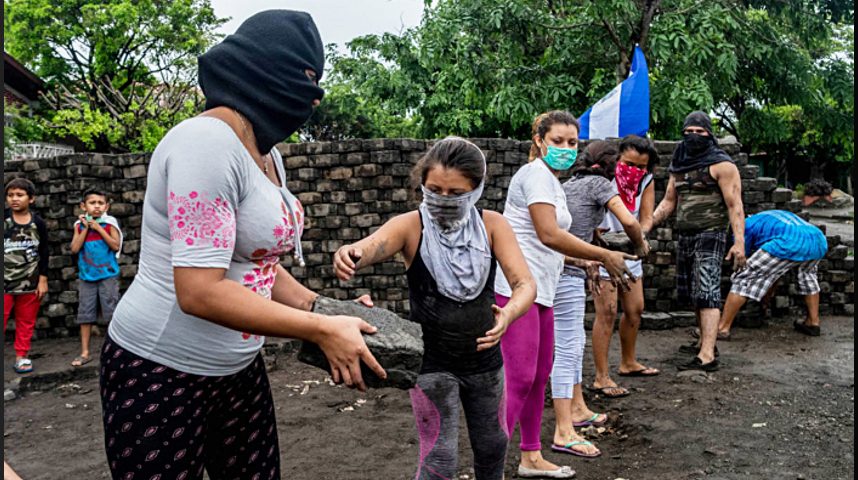 Women and girls build a barricade in Managua, Nicaragua to protect their selfs from paramilitary and police. June 16 2018

Since April, hundreds of thousands of Nicaraguans have taken to the streets in protest of the policies of the government led by FSLN President Daniel Ortega. The protests at one point escalated to road blocks and occupations and have been fiercely resisted by the government. Undoubtedly, Nicaraguan society is in crisis. Here, we present some important background information as to its origins.

It is clear the working class was not in the leadership of the opposition forces involved in the now suspended “National Dialogue” with the government. A mis-leadership composed of the business group COSEP and the Catholic Church seemed to be in the driver’s seat in those meetings. Additionally, the United States and other imperialist powers are intervening via the Organization of American States and wooing student groups to demand new elections without any regard for Nicaragua’s sovereignty.

Given the number of reactionary players attempting to shape Nicaragua’s future, it is important to understand how students, the working class, and small business people came to be ready to take to the streets when the regime proposed to implement International Monetary Fund recommendations to cut pensions.

Since the 2006 election of Daniel Ortega to the presidency, there has been what the Latin American Studies scholar William I. Robinson called an “intensification of capitalist development.” The Nicaraguan government, encouraged by the International Monetary Fund, has facilitated a dramatic growth in imperialist investment in Free Trade Zones, infrastructure, agribusiness, and mining. At the same time, according the Christian Science Monitor (Nov. 7, 2011), large contributions from Venezuela were used to bolster private companies tied to key figures in the ruling FSLN party.

The resulting lop-sided economic growth, not unsurprisingly, has led to a series of ecological crises that are threatening peasants and indigenous peoples, and to new inequalities that must be faced by workers, small businesses, and the people making a living in the informal sector. Significant layers of the Nicaraguan population have responded to these indignities over the last decade with protests.

In 2014, discontent with the state of affairs was threatening enough to the ruling FSLN that it fought and won legislation to overturn the term limits that would have prevented Ortega from running again for office. In 2016, FSLN power was used to press the Supreme Court to disqualify Ortega’s main opponent from the election altogether, bringing civil libertarians into the forefront of the social movement.

One of the most graphic responses to the FSLN electoral manipulation was a demonstration of 10,000 indigenous people who supported the Yatama party in Puerto Cabezas-Bilwi. Yatama has been protesting the FSLN’s failure to rein in a massive settler movement that is grabbing land in the autonomous zones where the Miskitu people hold communal property rights. Over half of the Miskitia rainforest region has already been taken by colonists seeking timber, gold, and land for cattle-raising, and the FSLN has not acted.

In April, these settler incursions onto indigenous land resulted in the infamous fire in the Indio Maíz Biodiversity Reserve, a fire that destroyed 6300 hectares or 15,567 acres of protected land. The Nicaraguan government’s initial refusal to accept international firefighting help was one of the sparks that ignited the April protest movement, as the catastrophe was such a dramatic example of the “profits before people” ethos of the new Sandinista economic plan for the nation.

The outrage over the Indio Maíz fire was prepared by years of indigenous and rural protests against a concession signed by the regime with the Hong Kong-based HKND Company for a massive and hugely destructive shipping canal that would bisect the country, break up the Mesoamerican biological corridor, and cut through four nature reserves, a globally important wetland, and Central America’s largest body of freshwater. The scale of the proposed digging and accompanying land expropriation is hard to grasp. The canal has been slated to be 65 miles long, occupy 500 square miles, and displace at least 7000 people.

In the years since the canal project was announced, rural Nicaraguans and indigenous groups have carried out at least 90 protests (Havana Times, April 28, 2018). In the last year, news accounts have begun to report that the canal itself may be dead in the water due to lack of investment and a new deal between Panama and Beijing. But no one in the movement is relieved, as the legislation that was signed for the canal project, Law 840, allows subsidiary development of deepwater ports, roads, and tourist areas under the same sovereignty-threatening and people-displacing rules. The FSLN has announced that it is going forward, for example, with a deepwater port in the heart of indigenous territory, just north of the Indio Maíz Biodiversity Reserve, at Bluefields (Rico, Today Nicaragua, Feb. 15, 2018).

The government’s facilitation of big investment by foreign mining companies has led to a new protest movement as well. In Nicaragua, there is no greater symbol of imperialist perfidy than a gold mine. In 1926, the Nicaraguan hero Augusto Sandino famously began his guerrilla war against the Yankees by occupying the San Albino gold mine and using the funds from production to buy weapons for his army, a combat unit that was initially composed of 30 gold miners. After four months of lucrative extraction, he blew up the mine, making it a symbol of international capitalist exploitation (Sandra Cuffe, “Nicaragua’s Golden Rule”).

In 2015, the residents of the agricultural town of Rancho Grande in the department of Matagalpa, part of the buffer zone of the Bosawás Biosphere Reserve, won a years-long struggle to stop the Canadian company B2Gold’s “El Pavón” open-pit gold-mining project there. The Yaoksa Guardians community environmental defense movement not only repeatedly demonstrated despite police violence, but organized a civil resistance campaign against the state that included a boycott of the schools and keeping their children home until the Minister of Education showed up to experience their protests.

The Rancho Grande victory was one high point in a grinding battle now mobilizing regional anti-mining groups from the Chontales, León, and Nueva Segovia departments, united under the banner of a new organization called the National Environmental Movement Against Industrial Mining (MONAFMI). One of the anticipated fights will focus on a proposed new mine in the historic San Albino district, which is to be operated by the Canadian Golden Reign Resources.

In August 2017, Ortega issued executive decree 15-2017, which repeals the country’s historic Environmental Evaluation System and allows environmental review of mines to be bypassed all together by a decree of the Ministry of the Environment. At the same time, the people of Santa Cruz de la India were in the streets contending with riot police in order to protest an attempt to start a mining project, backed by the World Bank Group’sInternational Finance Corporation (IFC), to be run by the UK-based Condor Gold. Civil resistance prevented actual digging for nearly a year but in July, the company submitted a revised permit plan to Managua, which is expected to be approved.

Condor Gold expects to produce 80,000 ounces of gold a year from this one pit. Its expectations are in line with the ecologically damaging and demographically disruptive national output of gold and silver, which has grown seven times since the 2007 election of Ortega (Cecelia Jasmine, mining.com, July 6, 2018). It is easy to see why a large layer of the Nicaraguan population feels that it is time to take down Nicaragua’s “open for business” sign.

One of the greatest indignities for working-class Nicaraguans has been the drastic expansion of Free Trade Zones. In 2010, Free Trade Zones in Nicaragua accounted for 90% of manufacturing exports from the country (Nathalie Picarelli, “Who Really Benefits from Export Processing Zones?” August 2016). In 2017, the National Commission of Free Zones approved the entry of new companies in the sectors of tobacco, textiles, and agro-industry. There are now 115,000 workers in Nicaragua being exploited by industrialists who have been given a 90% tax exemption for 10 years and pay their laborers an average of $157 per month, an amount that only comes to 33% of what the government estimates is necessary for a minimum existence.

Investors are not hard to come by, as the maquiladora wage in Nicaragua is the lowest in Central America. However, the bravery of workers demanding drinking water, health care, and lower production goals became international news when a 2016 protest of 3000 workers at the South Korean company Tecnotex in Tipitapa was stormed by government riot police, and organizers were charged and found guilty of crimes with prison sentences. Tecnotex produces garments for export to companies in the United States, including Kohls, Target, JC Penney, and Walmart.