Boston — As night fell on July 31, protesters from Movimiento Cosecha, who had gathered outside the house of Northeastern University’s president, announced that they would be occupying the area until Northeastern canceled its $2.7 million contract with Immigration and Customs Enforcement. Protestors blocked Boylston Street, singing and telling stories until 1 a.m., when cops moved in and arrested 11 occupiers. 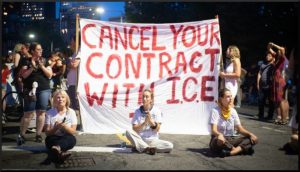 One week earlier, Cosecha and supporters had gathered in a park near the Northeastern University campus. They marched with signs decrying Northeastern’s connection to ICE through the Ruggles T subway station and into a student orientation taking place.

Once there, they held a speakout explaining the university’s contract with ICE to the new students and dropped a banner reading, “Northeastern, we won’t be complicit” from a walkway between buildings. They called on the students to aid in telling the university to shut down its contract and informed them that this was just the first of Cosecha’s actions.

Cosecha rallied supporters at the Ruggles T station again on July 31 and led them on another march, going through downtown Boston during rush hour and ending outside university President Joseph E. Aoun’s home.

They proceeded to hold a speakout, demanding that Aoun cancel the contract. Speakers included undocumented organizers from Cosecha, a representative from FIRE (Fight for Im/migrants and Refugees Everywhere), and the fiance of a man who was taken by ICE just days before their wedding.

Cosecha organizers then revealed that they intended to continue this protest as an occupation and that they would be camping outside Aoun’s house until their demands were met. As the occupiers prepared for the night and the following morning, the cops moved in and arrested them all.

Abolish ICE activists occupied the hallway leading to U.S. Immigration and Customs Enforcement offices in Syracuse, N.Y., on July 31 before 10 people were arrested.

About 100 people had marched to the ICE location at 401 S. Salina St. where a spokesperson read an eviction notice to the agency. This said in part:

“We have found your office and its counterparts in violation of a series of basic human rights in Syracuse: You have intimidated the entire immigrant community by working with Border Patrol to establish public transportation checkpoints, by invading or threatening to invade the homes of residents, and through aggressive interrogations of our community members. You have kidnapped an as-yet unknown quantity of Syracuse residents … and you have traumatized the family members and children of abductees. … Our community does not need your so-called ‘protection.’ … Get out, now.”

Participating in the march and action were members of the Syracuse Immigrant and Refugee Defense Network, the Workers’ Center of Central New York/Centro de Trabajadores-CNY, the Syracuse Peace Council, the International Socialist Organization and other groups.

No Water for ICE!

FIRE (Fight for Im/migrants and Refugees Everywhere) PDX held a demonstration and banner drop on Aug. 1 to demand the city of Portland, Ore., shut off utilities to Immigration and Customs Enforcement and sever all ties to the agency and its contractors. Members of the Portland branch of Workers World Party, the International League of Peoples’ Struggle, the Portland Central America Solidarity Committee and Occupy ICE PDX gave speeches after a banner drop from the Hawthorne Bridge and a march to City Hall.

By Jim McMahan posted to Workers World on August 9, 2018

Two mariachi bands played outside the prison. The music was sent in over phones to some prisoners inside. Maru Mora Villalpando, an organizer on the outside, spoke with a prisoner on the inside and communicated his message to a large rally. He said that 170 prisoners had gone on a two-day hunger strike and thanked the demonstrators for their ­solidarity.

The prisoners sent the following message: 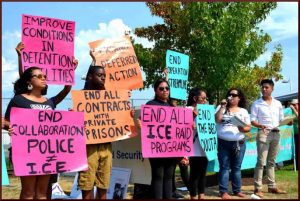 “We decided to begin a hunger strike on Saturday, July 14, in the morning, once we heard our supporters would be outside the facility on Saturday afternoon, to show we also support them, and expose the problems in here, problems with food getting worse, and in support of the families separated at the border and the children in detention.

“We want people detained to know we are not alone, to know that by being united in here our voices can be heard outside. So that everyone knows of the assaults and harassment we suffer at the hands of Geo guards.” (tinyurl.com/FB-NWDCR)

San Antonio, Aug. 4 — Occupy ICE SATX’s 24-hour occupation officially kicked off with a general assembly on July 17, as well as chanting and sign displays while camp was set up. The encampment is located at the edge of the Immigration and Customs Enforcement office parking lot on a stretch of lawn not technically the property of the city or ICE, whose inconspicuous office sits underneath a highway overpass.

Comrades from across the spectrum of the left gathered in San Anto, Tejaztlan, to show solidarity and support for Indigenous/Latinx families imprisoned under the illegal U.S. family separation policy. They were there to also give moral support to prisoners, some of whom have not yet received needed medical attention.

Present were the Autonomous Brown Berets, the Autonomous Student Network and the Contract Todo Network, whose members formed the Occupy ICE SATX movement and represent a cross section of decentralized leftist groups in Central/South Texas.

Over the last 18 days, the occupation has continued with three or four people present throughout the day and about the same number at night in the first week. As awareness and support increased, it grew in the second week to about twice those numbers.

The occupiers have held noise rallies most days of the week, usually with about 15 people, and in the afternoon, when buses with detainees are scheduled to arrive. Chanting, bullhorn shouts, singing and the clamor of household objects making improvised percussion could be heard through the neighborhood. Curious ICE employees flocked to their windows, and Homeland Security agents marshalled in the parking lot, bristling with tactical gear and service dogs, in an urgent response to the unarmed, nonviolent, lawful protest.

The occupiers raised their voices, reminding that “No one is illegal on stolen land” and advising onlookers to “Quit your job!” This caught the attention of local media TV crews, which in turn caused Homeland Security to reroute or cancel bus transportation of prisoners on several days.

Reactionaries from the “Patriot Front,” wannabe kossacks that are part of the U.S. immigration pogrom, attempted to attack the camp on Saturday morning, July 29. But occupiers stood their ground — nonviolently. They would not be triggered into reaction, and only incurred mild vandalism and a stolen flag. “Asher,” an occupant at the camp, stated: “ICE has a vested interest in the operations of white nationalist groups. ICE’s work is the realization of such groups’ manifestos.”

Word of the attack spread to community members who then came out and showed even more support during the second week. Friends of the occupiers and local concerned citizens from a broad racial and class spectrum donated needed items: food, chairs, blankets, toys, crayons, diapers and other children’s items.

About 50 families travel to the ICE facility every weekday morning to try to visit imprisoned loved ones and seek information about their immigration cases. For the children and parents visiting the prisoners, the camp now has much needed supplies, a full pantry and makeshift refrigeration.

A typical evening at Occupy SATX consists of cooking out, listening to music and reflecting on each day’s direct actions — a beacon of hope.