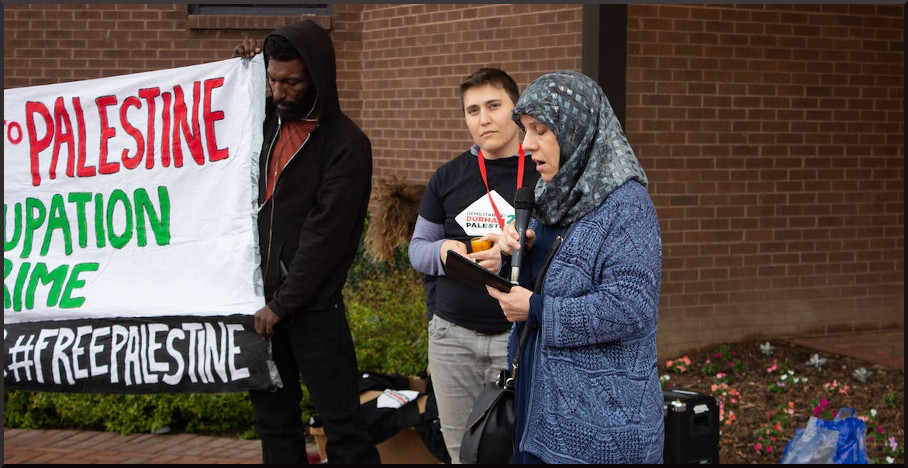 Manal Sidawi of the Muslim American Public Affairs Council reads a prayer during a rally in support of Demilitarize Durham2Palestine’s proposed resolution banning police exchanges between Durham Police and Israel outside Durham City Hall on April 16. The resolution later passed 6-0, making Durham the first city in the country to ban the practice. (Photo: Sammy Hanf)

by Zaina Alsous and Sammy Hanf, originally published by Scalawag Magazine, May 10, 2018

Durham, North Carolina became the first city in the country to ban local police exchanges with Israel on April 16, when the city council unanimously passed a resolution opposing any international “military-style” training for police officers.

During a heated discussion at City Hall, opponents of the resolutions expressed confusion over the policy’s relevance to Durham, or said they opposed what they saw as unfair targeting of Israel.

“There are real problems facing this city, and the Palestinian situation is not one of them,” Richard Ford of Durham’s “Friends of Durham” political action committee said during the public comment period. Durham Mayor Steve Schewel also expressed dismay at what he said were false rumors that Durham had plans to send its police to Israel for training.

But Southern solidarity with Palestine has deep precedent. Three years after the famous student Freedom Summer actions in Mississippi in 1964, in the aftermath of the 1967 war that began the longest standing military occupation in history, Stokely Carmichael (who later changed his name to Kwame Ture) and fellow Student Nonviolent Coordinating Committee member Ethel Minor published a two-page article in the SNCC newsletter, “Third World Round-up: The Palestine Problem.” In this controversial article, they described Zionism as a form of settler colonialism, a global injustice that necessitated solidarity with displaced Palestinians. They argued that the occupation of Palestine wasn’t a far away tragedy disconnected from their political realities in the South. Rather, SNCC members believed oppressive policies in Palestine had a direct connection to the lived experiences of Black and Brown people all over the world. In a 2012 interview with Democracy Now! the poet and novelist Alice Walker, born the daughter of sharecroppers in Eatonton, Georgia, compared systemic oppression in Palestine to that of Jim Crow. “Wherever you see people who are being humiliated it is our duty as human beings…to speak.”

In 2014 Southern organizers celebrated the 50th anniversary of SNCC’s Freedom Summer. The anniversary coincided with a bloody Israeli military operation in Gaza, “Operation Protective Edge,” that led to the deaths of over 2,000 Palestinians. “The same summer I watched the documentary about Freedom Summer in Mississippi, I learned about the struggles of Palestine,” said Ajamu Amiri Dillahunt, a member of Black Youth Project 100 and a student at North Carolina Central University, a historically Black university in Durham.

Dillahunt was one of many organizers who helped build the “Demilitarize Durham2Palestine” campaign, urging city officials to ban police exchanges between Durham and Israel. He cited SNCC’s 1967 solidarity statement as part of his inspiration. “[What] brought me to the campaign is being grounded in history and being inspired by SNCC, as a young Black student organizer in the South.”

He also cites a deep legacy of intersectional and internationalist solidarity coming out of the South.

“There’s a photo from 2010 where I’m 12 years old and I’m pushing my great-grandfather in a wheelchair at a rally, and I later learned that my grandparents had brought me to a Palestine liberation rally in Durham. As I’ve been raised into the movement, solidarity with the struggles of oppressed peoples across the world has always been the story taught to me, that we can’t get free without each other.”

The Durham2Palestine Campaign also did not emerge overnight. Beth Bruch, a member of Jewish Voice for Peace and an organizer with the campaign said that in the wake of the Black Lives Matter Movement and the high profile murders of Black people across the country, the coalition chose to highlight the intensifying entanglements between militarized Israeli and U.S. police practices. “We saw these police exchanges with Israel as an opportunity to oppose militarization of police in Durham and to oppose brutality happening in Palestine,” she said. “We know police officers in St. Louis/Ferguson, Chicago, and other cities have participated in these exchanges which translate into horrible surveillance practices and violent police tactics.”

A coalition of 10 local organizations built and coordinated the campaign over the past two years, and presented a petition with nearly 1,400 signatures to Durham City Council on April 16. Their proposed policy resolution that “the Council opposes international exchanges with any country in which Durham officers receive military-style training,” passed 6-0.

Organizers had good reason to wonder if Durham would pursue similar training. Durham’s last police chief, Jose Lopez, participated in a police exchange program in Israel through the Anti-Defamation League, and the current Durham police chief, C.J. Davis helped establish and run an exchange program with Israel through the Atlanta Police Leadership Institute as a high-ranking officer in Atlanta. Thousands of U.S. police and border patrol officers, including ICE and FBI agents, have traveled to Israel to be trained by Israeli police and military forces since the early 2000s.

In 2003 the Anti-Defamation League began to invite American law enforcement executives to Israel to participate in a week-long counter-terrorism seminar. Since the beginning of the exchange program, according to the ADL, “more than 200 law enforcement executives have participated… representing close to 100 different federal, state and local agencies across the country.”

Critics of police exchanges argue that they encourage racially biased and violent policing.

Durham has previously taken explicit stances on issues of international justice. In 1981 the city council issued a boycott resolution in opposition to South African Apartheid, stating:

“Whereas the Durham City Council recognizes the equality of all humanity, the inherent right to human dignity, and the entitlement of all persons to equal treatment under the law.”

Many today consider the military occupation in Palestine a contemporary form of apartheid, and one that might be possible to defeat by employing similar tactics of mass nonviolent resistance, such as “Boycott, Divestment, and Sanctions.” As part of the BDS movement, in 2014 Durham activists with Jewish Voice for Peace won an agreement from Durham County to end its contract with G4S, a British security company that was involved in prison and military equipment operations in Israel.

The Demilitarize Durham2Palestine Campaign frames militarized policing as an intersectional issue affecting many local communities, says organizer Ihab Mikati. “We have in our coalition people who are prison abolitionists and Muslim social justice groups and folks who are advocating for Black lives,” he said, echoing the earlier international solidarity sentiments of Walker and Carmichael. “Everyone feels like we have the same self-interest when these struggles are connected to each other.”

Some at the council meeting expressed a fear that Durham’s resolution may be perceived as anti-Semitic. But members of Jewish Voice for Peace, one of the anchoring organizations for the campaign in Durham, say it’s because of their Jewish faith that they feel a sense of obligation to Palestinian solidarity.

“I have Jewish family members who were displaced from Germany right before World War II,” Bruch said. “It is because of this history that I do this solidarity organizing… I have to speak out and fight this brutality as a way of honoring my ancestors who resisted oppression in order to be true to my conscience.”

In a world where capital moves more rapidly and freely than ever before, while technologies of security and border militarization have become more advanced and more entrenched, local conditions cannot be extracted from the global matrix of power and racialized violence. In 2017, Elta North America, an Israeli-owned defense manufacturer, was one of four corporations chosen to help build a prototype for the border wall between the U.S. and Mexico. The future of challenging racially stratified police practices at home and abroad will depend on the ability of community members to tell compelling stories about why our fates across borders are intertwined.

“I return often to Nelson Mandela saying ‘our freedom is incomplete without the freedom of Palestine.’” Dillahunt said. “I like to uplift those revolutionary Black leaders who supported Palestine as a tool to help mobilize Black people to speak up, for all of us.”

Zaina Alsous is a writer, editor at Scalawag Magazine, and grad student worker at the University of Miami. Her work has appeared in The Boston Review, The Offing, and The New Inquiry. Follow her on Twitter at @diasporadical_z

Sammy Hanf is a freelance journalist based in Durham, North Carolina.