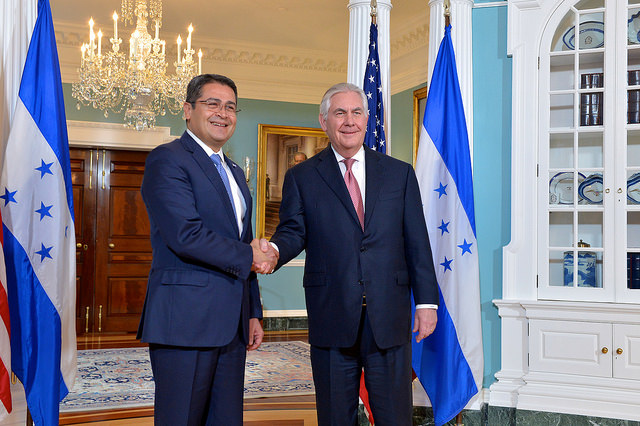 by Rick Sterling, Originally Published in The American Herald Tribune

Honduras is in crisis. Results from the election last Sunday have been delayed day after day but could be announced any moment. There have been streets protests for the past several days with several people killed. Constitutional rights have been suspended and a curfew imposed.

The current president and National Party candidate, Juan Orlando Hernandez, has reportedly flown to Washington DC for consultation. Honduras is a US ally and the only Central America country to host US military base and forces. If Juan Orlando Hernandez is declared winner of the election it will likely result in increased mass protests and violence.

The current National Party government derives from the 2009 military coup which overthrew President Manual Zelaya. When Zelaya was kidnapped in the coup, he was flown directly from Tegucigalpa to the US Palmerola Air Base just 40 miles from the capital. After time on the ground there, with the coup leaders presumably consulting with Washington, the kidnapped President was taken to Costa Rica. In the face of massive resistance to the coup government, five months later there was a sham election which, according to Secy of State Hillary Clinton, made the coup a “moot point”. The election was widely boycotted within Honduras but given the seal of approval by Washington.

Four years later, in 2013, there was a Presidential election which included a new party: the Liberation and Refoundation Party known as LIBRE. This party represented popular forces which supported the ousted President Manual Zelaya and his progressive policies. They emerged out of the popular resistance and quickly surpassed the traditional Liberal Party. In 2013 they presented a serious challenge to the National Party. They claimed they won the contest but it was stolen from them.

Ahead of the 2017 election LIBRE forged a coalition with two smaller parties. They decided to name themselves the Coalition Against the Dictatorship and to support Salvador Nasralla as their candidate. Former President Zelaya is a prominent leader in the coalition.

David Matamoros Batson, previous Secretary General of the National Party and member of Congress, is president of the Supreme Electoral Tribunal (TSE). He has been responsible for overseeing the elections in 2013 and 2017.

EVIDENCE OF ELECTION FRAUD BEFORE THE ELECTION

Days before the Honduras election The Economist published a blockbuster article titled “Is Honduras Ruling Party Planning to Rig an Election?” They report “The Economist has obtained a recording that, if authentic, suggests the ruling party has plans to distort results in the upcoming election.” The two hour recording is from a National Party training session. It details five tactics used to influence election results: buy the credentials of small party delegates who are supposed to verify the local polling place, surreptitiously allow National Party voters to vote more than once, spoil the votes for other candidates, damage the tally sheet which favors their opponent so it cannot be transmitted electronically to election headquarters. and expedite the tally sheets favoring their party.

EVIDENCE OF MISCONDUCT BY TSE IN THE ELECTION

Examination of the official twitter feed from the Honduran Supreme Electoral Tribunal (@tsehonduras) and comparison with the previous 2013 national election procedures reveals that the TSE has operated with bias and lack of transparency. Given that the President of the TSE, David Matamoros Batson, is also the former Secretary General of the National Party, there should be more not less scrutiny.

Following are examples indicating bias in the election proceedings:

In the 2013, the TSE started posting the election results at 6:13 pm when just 24% of the total votes had been received. Those returns gave the National Party candidate Juan Orlando Hernandez a 5% lead.

This election, TSE acted differently. At 7:55 pm , TSE President Matamoros tweeted “We have received 40% of the results …. We have two options: to show the results now …or wait to receive real data.”  A few minutes later he tweeted “We are late giving results because we met with the technical team to review and be sure the data is representative of the country.” Still TSE did not post the results. TSE did not post results until just before midnight. The TSE results showing challenger Salvador Nasralla with a 5% lead. With 57.2 % of total votes counted the results were:

– Several other candidates had less than 1%.

Prior to the election, TSE claimed they expected to post the results from 70% of the electorate on election night.  This claim was silently forgotten.  With the polls closing at 4 pm and the ballots then being counted locally and tally sheets filled out, the TSE claimed they had received 40% of the tally sheets before 8 pm .  TSE claims they only received an addition 17% over the next four hours.  This is curious since this should have been a time when a significant majority of tally sheets were transmitted electronically to the TSE headquarters for inclusion in the vote count.

The Honduras election procedure is to count and tally the paper ballots at each voting station (‘mesa’). After the tally sheet (‘acta’) is signed off by representatives from each party, the tally sheet is scanned and transmitted electronically to the TSE headquarters in the capital for inclusion in national totals. Normal procedure is for the TSE to determine the election on the basis of the results received electronically.

Following the posting of results showing the opposition candidate with a significant lead, at about midnight on election day, the TSE changed the procedure and stopped posting results for the next 36 hours.

The explanation was given by TSE President Matamoros at 1:39 pm on Monday 27 November: “Today we are going to start opening the ballot boxes coming in from across the country to understand the ballots and results.”  Five minutes later, at 1:44 pm, he added “We cannot give results until all the missing tally sheets come in.”

The situation was questioned by Spanish election observer Ramon Jauregui who noted “There is no technical reason that explains the delay, because the tallies from all 18000 polling places were transmitted electronically to the @tsehonduras on the day of the election.”

The only justification for not updating the election results would be if the tally sheets (“actas”) were not received. Over two hours later, at 4:17 pm, the number of missing tally sheets mysteriously increased by 25% to 7500. TSE Matamoros announced  “We are missing 7500 actas”. The contradictory numbers coming from the official TSE calls into question either their competence or integrity.

While TSE President Matamoros was issuing conflicting information about the number of missing ‘actas’, another election official was saying something very different. As reported in this Reuters story:

“Election official Marcos Ramiro Lobo told Reuters on Monday afternoon that Nasralla was leading by a margin of five points, with about 70 percent of ballots counted.  Lobo said Nasralla appeared certain to win, signaling that experts at the electoral body regarded his lead as irreversible.”

Also on Monday the third place Liberal Party candidate, Luis Zelaya (NOT the former President Zelaya ) recognized Nasralla as the winner and urged the National Party leader to concede defeat.

About noon on Tuesday the TSE resumed posting election results after the 36 hour interruption. The new data showed Nasralla’s lead steadily declining and by Wednesday the National Party candidate and current President Juan Orlando Hernandez was edging ahead. At this point in time, one week after the election, the TSE shows 95% of the votes tallied with Juan Orlando Hernandez ahead with 42.9% of the vote versus 41.4% for Salvador Nasralla.

WHERE ARE THINGS AT NOW?

For the past several days TSE has said they are performing extra scrutiny of the ballots and ballot tallies.  They have invited contending parties to observe the process but the opposition parties have declined. TSE may release their results and claim that Hernandez won the election at any moment. Opposition candidate Nasralla is calling for a new election under international observation and control.

Honduras is important to US foreign policy and the White House is closely following events. In mid November Foreign Policy magazine ran an article titled The United States has a lot Riding on the Honduras Election” The article says “losing Hernandez would be a real setback.”. On Wednesday the US State Department spokesperson said the US looks forward to working with the new Honduran President.

Clearly the Honduran people have even more riding on the Honduras election. The coup of 2009 led to increased crime and violence along with massive repression of landless campesinos, environmental and indigenous communities. From the Caribbean Sea to the Pacific Ocean, the domestic policies of Honduras have been skewed to benefit foreign corporations, plantations, the local oligarchy and neighbor to the north.

The current situation calls into question the objectivity of the US and Organization of American States (OAS). Will the US and OAS issue token criticisms but ultimately rubber stamp this Honduras election which has so many glaring problems?  If so, it will highlight the double-standards with Venezuela where the US and OAS  have aggressively criticized elections and refused to acknowledge the results even after full recounts and verification. The Honduras election process offers the potential of verification but only if the data from each and every polling place is compared with the data recorded at the TSE headquarters. The secret National Party training described by The Economist specifically called for disruption of the transmission of unfavorable “actas” (tally sheets) to the headquarters.

As protests and repression continues and threatens to explode in Honduras, one question is whether Washington and the OAS will issue token criticisms and make a “moot point” of the 2017 electoral coup as they did the military coup in 2009. Rick Sterling is a founding member of Syria Solidarity Movement.

More than 50 cities world wide participate in car caravans demanding the end of the US economic embargo on Cuba.

This was today in Havana 🇨🇺: