Native groups have taken to Petroglyphs National Monument in Tiwa Territory, commonly known as Albuquerque, New Mexico, to demand justice for Darrell House, a native man who was brutally tasered by rangers of the U.S. National Park Service (NPS), while he offered prayers on a hike with his sister and dog one week ago.

A prayer walk from Ogahpogeh (Santa Fe) arrived to the site on Saturday afternoon, as reported by The Red Nation’s Nick Estes, who tweeted, “#JusticeforDarrell walk ended at Petroglyphs National Park. Askia Trujillo from Ohkay Owingeh led the prayer walk. Walkers are demanding the firing of the two rangers who brutalized Darrell and an apology and restitution, as well as #LandBack.”

The Red Nation, a coalition of Native of non-Native activists, educators, students, and community organizers advocating for Native liberation, has called for “a full investigation of NPS actions of racial terror that day, the termination of rangers Wineland and Graden (who carried out the assault), and restitution and a full apology to Darrell and his sister” for the violation which took place on Saturday, December 26. 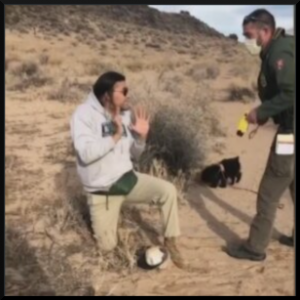 Darrell, of Diné and Oneida native heritage and Marine veteran was with his sister and dog, Geronimo, had hiked Petroglyph National Park and stepped off the trail in compliance with physical distancing guidelines as a large group approached. They were then followed by park ranger Wineland, reportedly for being off-trail. The ranger called for backup, returned with them to the trail, and repeatedly tasered Darrell and Geronimo. The repression by the white settler officers was filmed by his sister.

Darrell was handcuffed and detained for several hours and cited for several infractions including resisting and interfering with NPS functions. While he was released, the hate crime serves as a reminder of the ongoing colonial violence perpetrated against Indigenous peoples by the state

Native groups have taken to Petroglyphs National Monument in Tiwa Territory, commonly known as Albuquerque, New Mexico, to demand justice for Darrell House, a native man who was brutally tasered by rangers of the U.S. National Park Service (NPS), while he offered prayers on a hike with his sister and dog one week ago.

Here’s a video of the prayer walk entering the park, led by Darrell and Aski and two prayer staffs—one from @The_Red_Nation. pic.twitter.com/fhvX7YFQIo

We’re here at Petroglyphs National Monument in Tiwa Territory (Albuquerque) to demand #JusticeforDarrell who was brutalized by NPS rangers last week. Our relatives are arriving on a prayer walk from Ogahpogeh (Santa Fe). Read our statement: https://t.co/i6MylfA2bx pic.twitter.com/vZefe2MHc5

A statement published by The Red Nation on its website, describes the significance of the site.

“The Petroglyphs National Monument, which is home to ancient Indigenous rock art that still retains spiritual and cultural significance to Indigenous people today, was initially created at the request of Native activists to protect the area from vandalism and developers. Instead, the NPS under the authority of the Department of Interior is policing Native people on Native land.”

“Public lands are stolen lands. Indigenous people have the right to practice their culture and spiritual ways on Indigenous land without fear of repression, discrimination, or violence“ read the statement.