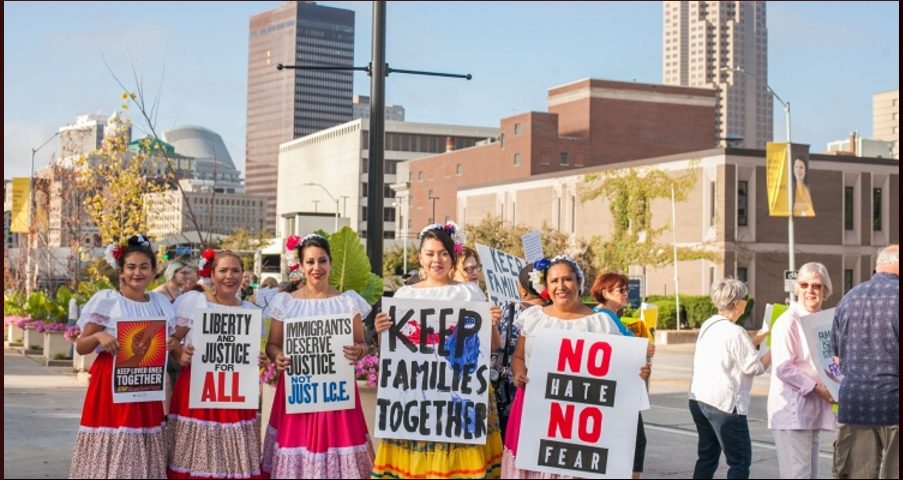 A protest in Iowa coinciding with a state visit by A.G. Jeff Sessions, organised by Iowa CCI in partnership with AFSC., Photo: AFSC / Iowa Citizens for Community Improvement

Editor’s Note: I liked this article because it provides talking points for those engaged in political conversation with non-activists.  And, regardless of where we stand on political change, there are instances where it is useful and appropriate to use mitigating language to detoxify a politically inflamed and distorted subject.   At the same time, it deliberately leaves out the story of how these particular migrants came to leave behind their homes and their lives, to flee Honduras at this time.

The president continually portrays migrants and migration – including the families traveling here as part of the migrant caravan – as a threat to the United States. Reporters, analysts, and even advocates may be unwittingly reinforcing this framing – and undermining humane treatment for all people. Here’s how you should talk about the migrant caravan to avoid reinforcing this harmful framing:

1.  Migrants are people who move – and they have human rights.

Always use inclusive language that doesn’t “other” migrants and that emphasizes our shared humanity and rights. Most of us move from where we were born; movement is a common part of the human experience.

2. Avoid water metaphors – people do not constitute a flood, flow, or wave.

The media commonly uses water metaphors to describe migrants and migrations, but this language is corrosive. Floods and tidal waves are mortal dangers – hard to contain – and using these terms to describe migrants helps reinforce the migration threat narrative. Migrants are people seeking a better life for themselves and their families – not flows of water.

3. Avoid the language of invasion.

In some egregious cases, reporters are describing the migrant caravan as if it is an invading army. The New York Times describes the caravan as “defiant,” for example. The AP tweeted that the caravan was like a “ragtag army of the poor” and has since apologized; likening the families to a military force reinforced Trump’s view that they are a threat to the United States. The president has tweeted that people on the caravan are criminals, and he often frames migrants as emissaries sent by hostile governments (“they’re not sending their best,” for example) – perhaps as a pretext for suggesting a military response rather than a humanitarian one. But people who have joined the migrant caravan are traveling together because there is safety in numbers, and they are looking for safety and peace. They deserve our empathy.

4. Seeking asylum is a right – and our system should treat all people with dignity and humanity.

There are many reasons why people leave home and seek a better life abroad. Rooted in post-World War II domestic and international laws, our system allows refugees to seek asylum in the United States if they are fleeing persecution. Many of the people in the migrant caravan are traveling here to escape violence and to seek asylum, something they have a legal right to do. Ensuring that the United States builds a fair and generous asylum system is critical.

But we must also build a system that treats all people humanely. People’s reasons for migrating are complex, and economic instability and violence are interconnected. We must therefore reject policies that criminalize migration more broadly, militarize our borders, and treat people like those in the migrant caravan with cruelty and brutality.

So when talking about the migrant caravan, focus on humane treatment for all, not the narrow legality of asylum claims.

5. Be careful about the language of crisis. Calling immigration a crisis feeds punitive and exclusionary polices.

The Trump administration often talks about migration as if it’s a crisis. This language makes immigration seem like a serious threat demanding a strong emergency response. But the fact is, border crossings are not surging and are near historic lows. Immigrants and arriving migrants do not constitute an existential threat, even if white nationalists and nativists portray them as such. Don’t repeat the administration’s framing of immigration as a crisis.

That is not to say that nothing serious is happening. For families traveling in the migrant caravan, the situation may feel like a personal crisis. The decision to leave one’s home due to life-threatening violence and poverty can never be undertaken lightly. And how the Trump administration is treating migrants and immigrants – including those in the caravan, those arriving at the border, and people who have made their lives in the United States – is creating a moral and humanitarian crisis. But that’s quite different than migration and migrants themselves being the source of crisis.

All of us can show support for migrants and help build support for a compassionate response through our language and framing.

Carly Goodman is a historian and the Communications Analyst and Mellon/ACLS Public Fellow at American Friends Service Committee (AFSC).