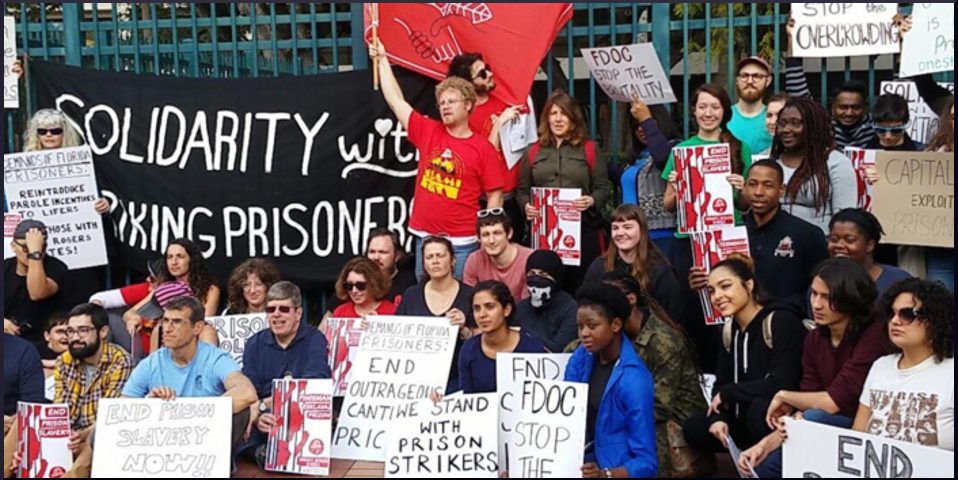 At root, striking prisoners demand they be treated as human beings; the rest of their demands flow logically from recognition of their humanity.

“For some of us it’s as if we are already dead.”

In what could become the largest prison strike in American history, prisoners in at least 17 states on Tuesday launched a series of protests that are slated to continue through Sept. 9—the anniversary of the infamous 1971 uprising at New York’s Attica Correctional Facility—demanding improved living conditions, voting rights, fair wages, and an end to racist incarceration policies.

“Even with the authorities threatening, prisoners are ready for action,” declared a statement from Jailhouse Lawyers Speak (JLS). “Fundamentally, it’s a human rights issue. Prisoners understand they are being treated as animals. We know that our conditions are causing physical harm and deaths that could be avoided if prison policymakers actually gave a damn. Prisons in America are a warzone. Every day prisoners are harmed due to conditions of confinement. For some of us it’s as if we are already dead.”

The mass mobilization—which started on the anniversary of incarcerated Black Panther George Jackson’s death—comes in response to an April riot at Lee Correctional Institution, a maximum-security prison in South Carolina where guards waited more than four hours to intervene in violent fighting that left seven inmates dead and more than 17 injured.

“Prisoners understand they are being treated as animals.”

“More than 800,000 prisoners are daily put to work, in some states compulsorily, in roles such as cleaning, cooking, and lawn mowing,” and “the remuneration can be as woeful in states such as Louisiana as four cents an hour,”

the Guardian reported, detailing how the such conditions are allowed to continue:

The idea that such lowly-paid work in a $2 billion industry is equivalent to slavery is leant weight by the 13th amendment of the U.S. Constitution. It banned slavery and involuntary servitude, with one vital exception: “as punishment for crime whereof the party shall have been duly convicted.”

Prisoners, in other words, have no constitutional rights and can be blatantly exploited.

The prisoners’ demands and planned protests—which include work strikes, sit-ins, boycotts, and hunger strikes—have garnered support from advocates for criminal justice reform across the continent. Journalist Naomi Klein urged her Twitter followers to support the national strike, noting, “states cannot afford to ignore them if there is enough pressure.”

Several other individuals and organizations expressed solidarity, tweeting with the hashtag #prisonstrike.

“The prisoners’ demands have garnered support from advocates for criminal justice reform across the continent.”

“Prisoners have the ability to participate in the strike in a multitude of ways, one being work stoppages. So, if prisoners do have jobs in the prison, they can participate by refusing to go into work,”

Sawari said. Explaining the various actions the inmates have planned, she added:

But some prisoners don’t have the privilege to have a job, so they can participate through a sit-in, which would just be prisoners coming together and sitting in a common area, refusing to move, doing so peacefully.

Some prisoners don’t have access to being a part of general population, so they can participate by boycotting. And this is done through just not spending any money in the prison.

…And then, for prisoners that don’t even have access to spending money, they don’t have the privileges to do that. They’ll be participating through hunger strikes.

“This has been completely prisoner-led,” Dorsey noted. The demands, he said, “are really just a human rights declaration of basic demands that we would ask of any human across the world… And the only way their voices are going to be heard is through us on the outside amplifying their voices.”

“The demands are really just a human rights declaration that we would ask of any human across the world.”

The full list of national demands from “the men and women in federal, immigration, and state prisons” is below:

Jessica Corbett is a staff writer for Common Dreams