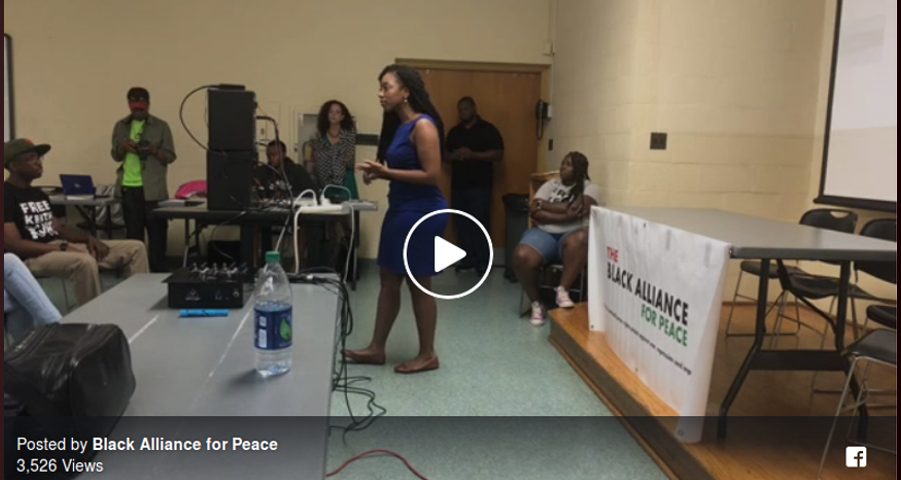 “Impunity is defined as “exemption from punishment or freedom from the injurious consequences of an action,” and is precisely what defines the war on poor black and brown people being waged by the frontline troops in that war – the police forces – from Baltimore to Birmingham, Alabama,” according to Vanessa Beck, the Baltimore representative of the Black Alliance for Peace. To address the issue of impunity and state violence perpetrated by the police and U.S. state violence in the form of war and militarization in Africa, a forum with local and national activists will take place August 18 from 2p to 4pm at the Walbrook Branch Library, 3203 W. North Ave, in Baltimore.

This panel discussion was livestreamed on the BAP Facebook page on August 18, 2018, in Baltimore’s Wallbrook Library. The goal was to educate the public on the U.S. government’s use of its vast military power to re-colonize the African continent and to subject Black people within its borders to police repression.

BAP is live in Baltimore with leading Black activists to talk about the militarization of our communities, here in the United States and in Africa!

Posted by Black Alliance for Peace on Saturday, August 18, 2018

Planned before the latest incident in which a Baltimore police officer was caught on tape physically abusing Dashawn McGrier, The Black Alliance for Peace, a new national anti-war alliance, along with local and regional organizations will discuss the issue of police violence in Black communities and U.S. war in Africa.  Titled “Military Occupation of the U.S. Black Communities & the Age of AFRICOM,” the forum will also include a performance by local artist Son of Nun.  The list of speakers includes:

“The forum in Baltimore is an important event not only for Baltimore but for the nation because Baltimore represents ground zero for official police impunity with cases like Freddie Gray, Tyrone West and others but Baltimore is also a site of resistance to the systematic assaults on the collective human rights of Black people,” according to Ajamu Baraka, National Organizer for the Black Alliance for Peace.