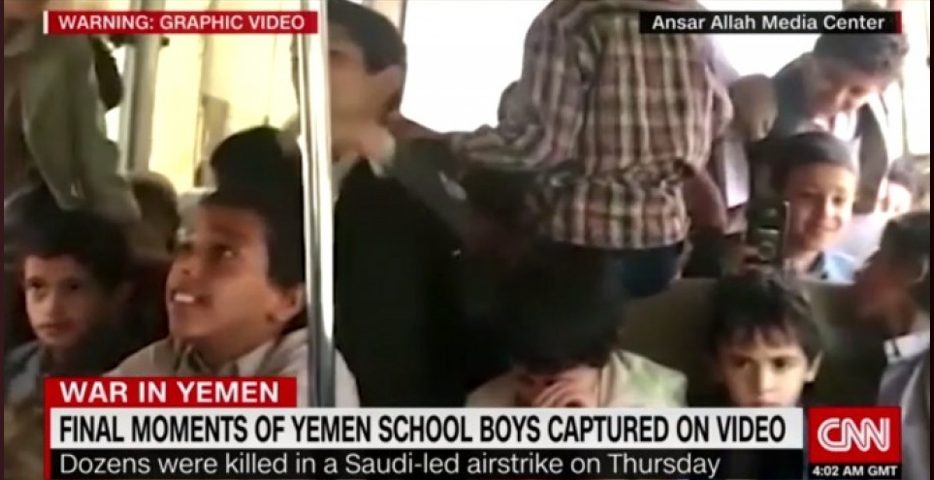 “Any war crime committed in Yemen by the Saudis and the Emiratis is a war crime committed by the governments in London and Washington, which continue to supply these monarchies with billions of dollars of deadly weaponry used to kill children on a school trip.” (Photo: CNN/Screengrab)

A busload of young boys was on a field trip. They were excited. Their summer session of school was over. This was to be the outing to celebrate the end of school. The boys jostle on the bus. It is noisy. One of them covers his ears. They are all laughing. One of their friends is taking a video (which was shown this week on Yemen’s al-Massira television). The video shows the universal joy of being an adolescent, of being filled with anticipation at the field trip.

Along the way, the bus stops at a crowded market in the town of Dahyan, in the Saada governorate in Yemen’s north, on the border with Saudi Arabia. This governorate or province is largely in support of the Ansarullah insurgency and is the center of regular bombings by the aircraft of Saudi Arabia and the United Arab Emirates. The teachers with the young boys make the stop to pick up supplies for the trip: snacks and water. The excitement on the bus does not abate.

It is just then, in this crowded market, that the aircraft of Saudi Arabia fired on the bus. It was a direct strike, according to eyewitnesses. The Red Cross now says that 50 children died in the strike (11 adults were killed). Among the 79 wounded, 56 are children—many fighting for their lives.

A UNICEF report out earlier this year suggests that this kind of violence is not unusual. Five children have been killed or injured in Yemen each day since the start of the Saudi-UAE war on that country in March 2015. The numbers are shocking, but also numbing—nearly every child in Yemen (11 million of them) needs humanitarian assistance, with millions of children acutely malnourished, with no safe drinking water or sanitation, with few schools, with cholera and acute diarrhea as normal features of life and with regular bombings and shootings around them.

Funerals in places of war and occupation are not sober affairs. They are heightened by the anger at the manner of death, but more so they are political rallies of great emotion. The children’s bodies arrived in cars wrapped in green. The coffins, wooden boxes, had a picture of each child on them. They were carried along the road to a simple graveyard. Their coffins were carried by boys from the Yemeni Scouts and Guides Association, their motto on their shirts reading kun musta’idan, or be prepared. Bomb strikes are routine. The Saudi and Emirati planes might have struck this funeral as they did in 2016, when they killed about 155 people in the al-Kubra Hall in Sanaa. Chants against Saudi Arabia rent the air. They were mingled with chants against the United States. No one in Yemen is fooled by the U.S. complicity in this war.

War Can’t Be a Clean Operation

Remorse is not available from either Saudi Arabia or the United Arab Emirates. Both governments insist that the raid was “legitimate” and that “war can’t be a clean operation unfortunately” (as UAE Minister of State for Foreign Affairs Anwar Gargash put it in Dubai). The Saudis, like the Israeli government when it arrests and kills children, said that it is the Yemenis who are “responsible for recruiting and training young children.”

There is barely remorse in the United States, from which the weapons of death go to Saudi Arabia and the UAE. It was an American-made plane that fired American-made bombs on these Yemeni children. Yemeni journalist Nasser Arrabyee took a picture of part of the 500-pound Mark-82 bomb used to kill the children. This bomb is made by General Dynamics at its plant in Garland, Texas. In 2017, bombs from this factory in Texas made their way to resupply the arsenal of Saudi Arabia, whose free-fall bombs were getting low as a result of the war against Yemen. General Dynamics made millions of dollars on this sale. This same type of bomb was used in the Saudi strike on the funeral in Sanaa in 2016. U.S. weapons firms have made hundreds of billions of dollars selling weaponry to Saudi Arabia and the UAE.

The U.S. Defense Secretary Jim Mattis said that he has sent a three-star general to lead an internal investigation into “what happened.”

But what happened is well known and has been well known for a very long time.

Last year, in November, 30-year veteran of the CIA Bruce Riedel described Saudi Arabia’s war on Yemen as a “quagmire.” He said that it has become the “worst humanitarian catastrophe in the world” and that if the Saudi blockade continues, “50,000 children could die in Yemen.” A year before that, Riedel pointed his finger directly at Washington and London. In April 2016, he said frankly, “if the United States of America and the United Kingdom tonight told King Salman [of Saudi Arabia] that this war [on Yemen] has to end, it would end tomorrow because the Royal Saudi Air Force cannot operate without American and British support.” In other words, any war crime committed in Yemen by the Saudis and the Emiratis is a war crime committed by the governments in London and Washington, which continue to supply these monarchies with billions of dollars of deadly weaponry used to kill children on a school trip.

Exit From This War?

On September 6, the various parties to this war will come to Geneva to try to restart impossible talks. The contending Yemeni parties have said that they will come to the table. It is obvious that this war is seen by Saudi Arabia and the UAE as a way to weaken Iran, although Iran’s actual role in Yemen is dubious. Nonetheless, Iran has said that it awaits an invitation from the UN to come to Geneva. It would like to hold face-to-face talks with its adversaries with the UN as arbiter. Iran has submitted a four-point plan to give the talks some heft, including an end to the aerial bombardments and an immediate ceasefire. There is no stomach in Saudi Arabia to take the Iran offer seriously.

In a recent article, the former CIA analyst Riedel says that this war in Yemen is the “signature foreign policy initiative” of King Salman and his son the Crown Prince and Defense Minister Mohammed bin Salman. “The crown prince,” Riedel writes bluntly, “has blemished his reputation by the reckless decision to intervene in Yemen and the humanitarian catastrophe it created.” It is unlikely that Saudi Arabia, absent serious external pressure, will stop this war. The integrity of the current king and his son—and in many ways the monarchy itself—is enveloped in this war.

Pressure will not come from the U.S. government. It is happy enough to see its weapons dealers make enormous profits—the kind of “Made In America” that pleases Trump. In the United Nations Security Council, the U.S. pressured the members not to demand an independent inquiry. All that was asked for was a “credible” investigation. That means that there will be no real investigation, as there was none for the Sanaa funeral bombing in 2016.

Staff members at UNICEF, meanwhile, have been heartbroken. The children had UNICEF backpacks, part of the aid that keeps the country from total breakdown. “There’s obviously a war on children,” said Juliette Touma of UNICEF.

Vijay Prashad is the Director of Tricontinental: Institute for Social Research and Chief Editor of LeftWord Books. He writes regularly for The Hindu, Frontline, Newsclick, Alternet and BirGün.