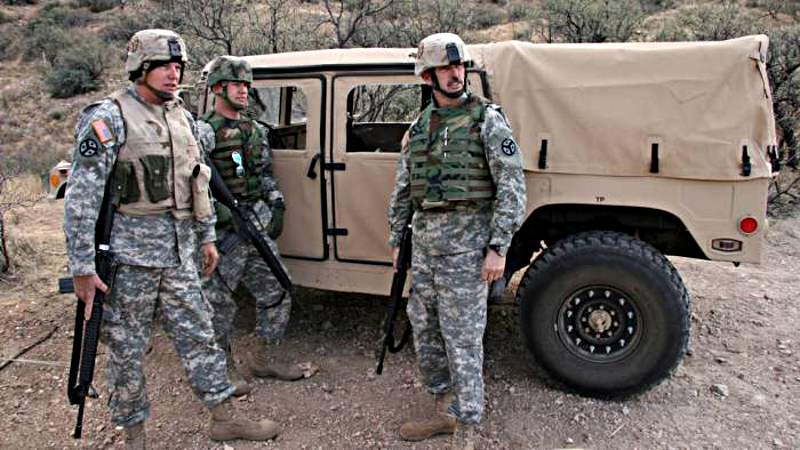 Declining empires are dangerous, and the U.S. is an empire in decline. If the U.S. ruling class can avoid the Thucydides Trap with China (the tendency for a declining empire to go to war with a rising empire), they still must face their own decline as the center of the capitalist system. In the face of the decline they are acting more and more as a class without solutions to their own problems, much less the broader problems facing the country and world. This bodes ill for all peoples. Case in point: Trump’s (further) militarization of the U.S.-Mexico border.

Trump authorized the National Guard to “defend” the U.S.-Mexico border on April 4. As of this writing (April 17) the White House has not released details, but the first troop deployments have already taken place, according to an April 12 New York Times report. Trump made the decision after Congress denied his $25 billion request for a border wall in the recently passed budget. Instead, he got only $1.6 billion. He also seemed to be reacting to racist and sensationalized stories on Fox News and other right-wing media about caravans of immigrants moving north toward the U.S.

While possibly an impulsive decision, it is also a cunning one. Sending troops to the border plays to Trump’s base and covers up his failure to deliver on one of his chief campaign promises—to build a “big, beautiful wall” and have the Mexican government pay for it. As a policy, it divides Americans (those in the U.S.) from Mexicans and divides and weakens the U.S. working class.

Viewed historically, sending troops is just more of the same old same old. The border region has always been a locus of conflict. As the U.S. settler state expanded into the Southwest, it fought two wars against Mexico, first in 1836 in the so-called Texas Revolution (remember the Alamo?) and later in 1846 to 1848 with the U.S. invasion of Mexico. Conflict continued along the border for another 70 years, including extensive violence against the Native American and Mexican inhabitants of the region and an insurrection by Mexican-Americans in South Texas in 1859-60, the Cortina War.

Following World War I and the passage of the Immigration Act of 1924, the U.S. restricted immigration. The Immigration Act of 1924, most notorious for the racial quotas on Jews and Eastern Europeans that trapped millions in Europe during the Nazi Holocaust, established the paramilitary Border Patrol to control the flow of immigrants into the U.S. from the south. For the next 65 years the U.S. adopted a revolving-door policy toward mostly Mexican immigrants: allowing them into the country when needed for primarily agricultural or unskilled labor, kicking them out when they were not needed or caused “labor unrest.”

This revolving door policy produced conditions of super-exploitation of Mexican workers in the U.S. (see the now classic history by James Cockcroft, “Outlaws in the Promised Land,” published in 1986, for extensive details). Mexican immigrants feared La Migra, as the border patrol was known in Spanish, for its violence and human rights abuses.

Beginning with the Reagan presidency in 1981, the Border Patrol became militarized, with military-grade weapons and helicopters. This trend accelerated with the passage of the Immigration Reform and Control Act [IRCA] of 1986. With IRCA, Reagan framed border control as an issue of national security and the war on drugs. Using racist language, he warned of hordes of Latin Americans flooding across our borders should the U.S lose the wars in Central America. At the same time, Reagan demonized drugs as an evil coming from outside the U.S. and corrupting our society, instead of viewing drug abuse and addiction as a major public health problem. Unsurprisingly, Reagan hid the role of the CIA and the U.S. proxy troops, the Nicaraguan Contras, in fostering the importation of cocaine into the U.S. Thus, from the long view of history, Trump is just upping the ante, employing the same racist tropes and the same policy solutions of his predecessors.

Imperialism, in both the economic and political sense, drives modern-day immigration flows. Poverty and unemployment in the capitalist periphery pushes people away from their homelands. Wealth and jobs in the capitalist core pulls those workers in. The push and pull is a general feature of the 20th and 21st centuries.

In addition to this general push and pull (which also pulls people from rural areas into cities), we must examine the role of imperialist foreign policy. The U.S., whose primary economic periphery is Latin America and the Caribbean, has sought to dominate “our backyard” for over 200 years.

Collectively, Hispanics or Latinxs make up the largest immigrant population in the U.S. The various immigrant groups—Mexicans, Puerto Ricans, Cubans, Dominicans, Central Americans, and now Columbians—are all here because of U.S. policy in the region. These groups are the “harvest of empire,” as Juan Gonzalez calls them in his “Harvest of Empire: A history of Latinos in America” (revised edition, 2011).

The current flow of immigrants from Central America to the U.S. exemplifies this pattern. Before 1980, there were very few Central Americans in the U.S. During the 1980s, the U.S. fought a series of proxy wars and “low intensity conflicts” against the Sandinista government in Nicaragua and revolutionary movements in El Salvador and Guatemala, in the process turning Honduras into a veritable U.S. military garrison state. Low-intensity conflict is a military euphemism. These wars were “low intensity” from the perspective of the vast destructive power of the U.S. military. They were anything but low intensity for the victims of U.S. intervention.

Since 1980, the number of Central Americans living in and coming to the U.S. has skyrocketed. And while the number of immigrants varies according to the economic and political conditions in both the U.S. and Latin America, the push and pull will never cease, no matter how many troops are stationed at the border or high how the walls are built.

Many U.S. citizens are ignorant of the Central American Wars, in spite of the large Central America Movement (CAM) that organized against U.S. intervention. Two independent films give you a glimpse of the conflicts and the connection to immigration. The first, “El Norte,” traces the journey of two Guatemalan siblings who flee to the U.S. after their family is killed by the military. Traveling through Mexico, the pair eventually cross the U.S. border and end up in Los Angeles. Made in 1983 and released in 1984, the film is preserved in the U.S. National Film Registry because of its cultural and historical significance.

The second film, “Sin Nombre,” traces the journey of a young Honduran women, Sayra, from her home in Tegucigalpa through Mexico. The film also focuses on the Mara Salvatrucha gang. Much of the activity takes place in Tapachula, a Mexican town near the Guatemala border that is an important train hub. The immigrants ride the trains north toward the U.S. border. Made in 2009, Sin Nombre portrays the violence and dangers immigrants face as they travel to the U.S. In a case of life imitating art imitating life, the caravan of immigrants demonized by Trump traveled through Tapachula.

No troops on the border! Defend Immigrant Rights!

Contrary to Trump’s claims, Mexican officials did not stop the caravan of mostly Honduran immigrants in response to his threats. Mexican immigration officials work with Central American immigrants, offering them either a 20-day transit permit to leave the country or a 30-day permit that allows them to apply for formal legal immigration status in Mexico. Many of the immigrants decide to stay in Mexico, settling in large cities such as Mexico City or Puebla. Other continue north, in the hopes of crossing into the U.S.

The caravans themselves are a response to the numerous dangers from drug gangs and criminals that threaten the immigrants as they move north. This is portrayed in a powerful fashion in the film “Sin Nombre.” As documented by The New York Times (April 5, 2018), the immigrant caravans are fed and housed along the way by Mexican citizens and NGOs such as Pueblo Sin Fronteras (People without Borders), the groups that organized the caravan attacked by Trump and the right-wing media.

The presence of National Guard troops on the U.S.-Mexico border clearly increases the risk of conflict between the two countries. These troops also increase the likelihood of violence against those seeking to escape the poverty and violence created by imperial policy. Karl Marx, in his discussion of Irish immigration to England noted that capitalists use immigrants to drive down and control native workers, creating a class divided against itself. The working class is also divided by racism and the racial caste system in the U.S., by sexism, and by homophobia as well, all to the benefit of the capitalist elite, and these scourges must also be opposed.

The denial of human rights to immigrants, labeling immigrants with the absurd concept of “illegal human being,” and militarizing the border enables the capitalists to super-exploit immigrants, further weakening and dividing the U.S. working class. Only when we all, native born and non-native born, defend immigrants in the U.S. and the rights of people everywhere to a just and decent life, will the U.S. gain the strength to shape its own future. No troops to the border! Defend immigrant rights! No ser humano es ilegal! Solidarity forever!

Lazaro Monteverde has lived in Honduras, Spain, and Chile. He currently resides in the “belly of the beast.”