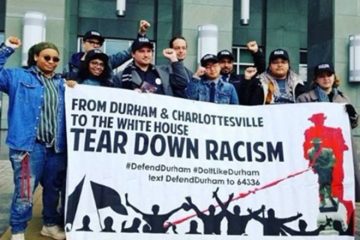 UPDATE: On Feb. 20, the Durham district attorney announced that all charges have been dropped against all the Durham defendants, including five who were to have gone to trial on April 2. By Workers World Durham, N.C., bureau, originally posted on Workers World, Feb 20, 2018 People power won the day here on Feb. 19, as three anti-racist activists went[…]