Fraternal greetings to all of our comrades and friends. Thanks to MOVPAZ [Cuban Movement for Peace and Solidarity of the Peoples] and especially to Comrade Silvio Platero for organizing this Regional Meeting of the WPC. I am deeply honored to be addressing this important and timely gathering.

Since the September 11, 2001 attack on New York, leaders of the US military-industrial complex have put the Empire’s war machine into high gear, attacking — under the guise of an endless “war on terror,” “defense of democracy” and “responsibility to protect” — one country after another and bringing death and destruction to many countries of the world, especially to those in Latin America and the Middle East.

Now, thanks to the Trump administration, U.S. imperialism’s aggression has been put in overdrive. The never-ending wars in Afghanistan, Iraq, Libya and Syria, and the continuous brutalization of the people of Palestine are now being supplemented by simultaneous threats of war and efforts to force a regime change against several other countries, most recently the coup in Bolivia; expanding the U.S. economic war through imposition of illegal, anti-human sanctions against Cuba, Venezuela, Nicaragua, Syria, Iran and, which has already resulted in the death of 40 thousand people and threatens the lives of an additional 300,000 people in Venezuela alone; withdrawing from missile and nuclear treaties with Russia and Iran, creating a humanitarian catastrophe in Yemen; dispatching more U.S. war ships and troops to the Mediterranean and the Persian Gulf; expanding the reach of the U.S. global war machine, NATO, into Latin America; starting economic and cold war with China; and increasing tensions with Russia. And on top of all this, is a trillion-dollar military and war budget to fund the Empire’s “full spectrum dominance” project for the whole world, about which all U.S. politicians and presidential candidates, with the exception of one or two, are absolutely silent.

Decades of neoliberal capitalist economic policies — massive privatization of healthcare and other social services, removal of market and environmental regulations, globalization of production at poverty-level wages, etc. etc., has created massive poverty, a health crisis and environmental disaster at the global level. 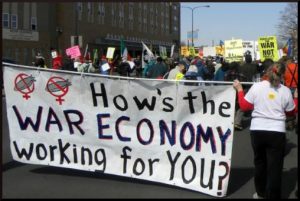 All these point to the fact that the Empire is pushing the world toward a very dangerous global military, economic, environmental and humanitarian catastrophe, which demands extraordinary steps on the part of the global peace movement if an irreversible disaster is to be prevented. The global GOVID-19 pandemic crisis has now more than ever opened the working people’s eyes, especially in the United States, to the cracks and weaknesses of the global capitalist/imperialist system and its inability to provide for the most fundamental and basic human needs, especially for the working people, African-Americans and communities of color.

Massive demonstrations are spreading throughout the United States, around the issue of police brutality and racism of the neoliberal capitalist economic policies. But this is, indeed, only the tip of the iceberg. However, many see this just as an issue of police brutality alone, calling for the reform of police departments and defunding the police, or at best bringing the police under community control, forgetting the fact that all these oppressive measures, and racism in general, are only symptoms of the deeper contradictions of the capitalist/imperialist system itself that cannot be resolved by means of just a few of localized patches here and there, but requires a fundamental transformation of the system from the ground up.

To this general crisis we should also add the current crisis of legitimacy that has resulted from the mishandling of the COVID pandemic by the Trump administration and the economic problems — massive layoffs, unprecedented levels of unemployment, poverty, hunger, etc. — that have engulfed the whole country as a result of this mishandling of the pandemic.

Donald Trump, fearful of losing the election, is now himself contributing to the deepening of the legitimacy crisis of the state by questioning the validity of the upcoming elections and announcing that he would refuse to leave office if he is defeated in the elections. His plan, with the help of his loyal Republicans in the Senate, is refusing to accept the election results and referring the matter to the U.S. Supreme Court, which he is now trying to stack with his own supporters.

However, regardless of the outcome of the elections, the crisis of the U.S. and global capitalism will not only continue, but will deepen further, thus creating additional reasons for the wounded beast of imperialism to inflict more destruction on the peoples of the world — through more wars, economic sanctions and more blatant violations of human rights — in order to protect its weakening global hegemony.

All this, adds to our responsibility to redouble the World Peace Council’s efforts — regionally and globally — to confront imperialism’s anti-human global sanctions and war machine by pushing more strongly for a globally unified anti-imperialist peace movement on a world scale. Let us take the necessary steps to build such a unified movement before it is too late.

Bahman Azad is Executive Secretary of the U.S. Peace Council.