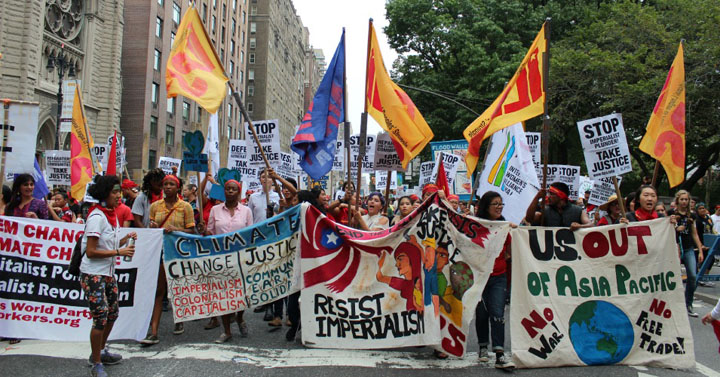 Statement by The International League of People’s Struggle (ILPS)

On August 14, 2020, the world commemorates the end of World War II in 1945. During the Great Depression, an acute global crisis of capital, conflict in the Eastern hemisphere was stirred up when imperial Japan invaded Manchuria in 1931. It had already been occupying Korea. In the Western hemisphere, the expansionist ambitions of Germany sparked an all-out international war when Nazi soldiers marched into Poland in 1939. Soon, both aggressive camps were aligned as the Axis powers led by Germany and including fascist Japan, Spain and Italy while the Western Allies including the USSR mounted their defense.

This horrific war spanned continents from Africa to Asia (South, West, and East), from Oceania and the South Pacific to the Americas. Eventually, the aggressors were defeated only through great sacrifice by the peoples of both the occupying and occupied countries, a war that is the most devastating in human history, with deaths estimated at 75-80 million from combat, starvation, disease, mass extermination against Jews and others, the US bombing of Nagasaki and Hiroshima and the Soviet’s decisive maneuvers against Germany and Japan.

This date is also being commemorated in many parts of the world as International Day Against Japanese Wartime Military Sexual Slavery. This is to remember the war crimes committed by the Japanese Imperial Army in the Asia-Pacific region against women in countries it razed, occupied or colonized – Korea, China, the Philippines, and Indonesia, among others.

The ‘comfort women’ system remains as one of the most atrocious war crimes committed against women where thousands were forced into servitude and sex slavery to Japanese soldiers. While many other instances of military sexual violence occurred during this period, the ‘comfort women’ system was the only instance where the state took a direct hand, issuing an imperial directive that enabled the systematic and large-scale transport or coercion of women and girls for such atrocious purpose. At the same time, the Japanese governments have repeatedly denied justice both to the former ‘comfort women’ and to many other victims including those who were mobilized for wartime forced labor.

It is 75 years since the end of World War II but Japan still refuses to accept responsibility for this crime against humanity. In fact, as a junior partner of the US in the latter’s current pivot to Asia, Japan is now pursuing a track similar to what it took 75 years ago: the path of aggression and military expansionism, in whose name the Imperial government committed its wartime atrocities against women and against nations.

The Shinzo Abe government uses trade and official development assistance as pressure points on debtor nations such as the Philippines to revise people’s understanding and remembrance of history. It obliterates all references to its wartime atrocities while promoting the false notion of being a savior to justify its invasion of Asian nations in WW II as well as to justify the current militarist thrusts of the Abe government.

As we single out Japan and call for its official recognition of its war crimes, so do we shout out against wars of aggression and state terror in their various forms carried out by other imperialist powers in many parts of the world. We condemn the US imperialist alliance that is supporting and carrying out terror, threatening, attacking, meddling in and militarizing around numerous nations.

In particular, we oppose the heightened US-China military conflict in the West Philippine Sea, a conflict fueled by the two countries’ common intent of seizing control of the international passage and thus establishing another point of control over international trade.

Today there is the most acute economic crisis ever, complicated by the pandemic, and tensions among states run high. The situation is very unstable. Terror reigns in many instances as reaction and fascism rise again. Budgets are being drained for military purposes. The extremely lucrative arms trade also drives conflicts. Amid the general violence, poverty, bigotry, morbidity, displacement and death are increasing. The people must organize, unite and build a global struggle against imperialism towards just peace.

Justice for victims of Japanese military sexual slavery!
No to another generation of “comfort women”!
Justice for all victims of imperialists’ war of aggression!
End wars of aggression!
Stop the US war machine, its allies and reactionary regimes!
Long live international solidarity!