The fact that Israel didn’t move forward on annexation on July 1 is no basis for hope. The country is determined to do so, annexation will inevitably mean uprooting Palestinians and moving them to shanty towns, and none of the vaunted opposition to Israeli plans, from Democratic Party progressives to Europe, means anything without real sanctions, Lara Friedman of the Foundation for Middle East Peace said on a very pessimistic call with Americans for Peace Now.

Settler advocates understand the meaning of the July 1 date set for annexation, said Friedman; and they are saying, Now the window is open. “We’re in the period of intense real negotiation between what the Trump administration may or may not want or may or may not allow them to do and what the settlers demand.” That window closes potentially on November 3 or at January’s inauguration if Trump is defeated. 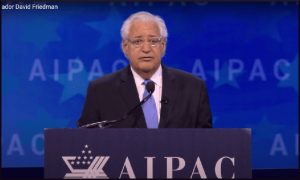 “As an observer, I feel comfortable saying this is a David Friedman policy and I take him seriously, I take him at his word, going back to his speech at AIPAC two years ago now where he basically laid out the equivalent, speaking almost as a preacher, How would we look our children in the eye if we failed to meet all of our goals under this most pro-Israel, as he defines it, administration in history? And since coming into office, they have systematically ticked off every one of the things they said they would do. The last thing on their list is annexation. They paved the way for annexation with the shift on policy on the Golan, where they said it is now official US policy that it is OK to obtain land if you did so in a defensive war.”

The global opposition is meaningless without sanctions, Friedman continued:

“You say there’s international pushback. That may be true. I don’t think this administration gives even a tiny little bit of concern for international pushback . . . Their focus appears to be, we have a set of voters we care about, we have a set of ideologies we care about, we’re going to do what we want . . . We’ll do it, and the world will either embrace it or will at least accept it because they can’t do anything to challenge it.

What about the opposition to Israel’s plans by an overwhelming percentage of the Democratic Party? Again, Friedman sees no impediment without a financial penalty to Israel, and Congress isn’t talking about that.

They say well if you do this it’s going to be very problematic in terms of aid for Israel and Democrats. And I’m thinking it was yesterday that the Senate is moving ahead now with an amended version of the National Defense Authorization Act, which is the only piece of major legislation that will probably pass before the November elections, and they added to the base tax with no discussion, no debate . . . a giant bill that codifies the MOU [Obama’s Memorandum of Understanding in 2016, giving Israel $38 billion over ten years] in an effort to make it impossible for anyone to play with aid to Israel, and it adds on millions of dollars and many, many levels of new cooperation with various agencies across the entire government, and they’ve added on into that same bill, a new cooperation program, which gives Israel a seat at the table at the secretary level in basically designing defense programs, and deciding what we’re going to move forward with in defense cooperation . . .

Friedman noted that there is a progressive Congressional letter, circulated by Rep. Alexandria Ocasio-Cortez (AOC), that speaks of withholding U.S. aid equivalent to what Israel spends on annexation, but it’s an outlier.

All I see is some letters which are pretty soft. The one letter that’s stronger — don’t worry about it, we’re denouncing as anti-semitic, no one will pay any attention. And I see Congress in a bipartisan way moving ahead with an unprecedented level of support for Israel and an unprecedented effort to actually legislate impunity and entitlement. So yeah, if someone wants to listen to me for hope on how this is going to get turned back, I think hope would be deeply, deeply misplaced.

She said Senator Van Hollen’s speech last week in which he said he seeks to place conditions on U.S. aid to Israel is toothless because Israel can merely use those American dollars somewhere else and free up other money to go to the purpose of annexation. Democratic threats are toothless without a potential reduction of aid.

Looking at Congressman Van Hollen’s comments yesterday . . . he was very cogent as always and thoughtful, I have to say I think whether or not use-restrictions mean anything at all will depend on whether those use-restrictions are connected to either cuts or pullback of funding.

Conditions only mean something if you threaten to penalize Israel for moving forward. Otherwise our $3.8 billion is subsidizing the annexation.

If the safe issue for progressives to land, except for the . . .13 [who] signed the AOC letter — if the majority of progressives are going to say, Listen we’re going to get tough and we’re going to say that none of this money be spent on annexation, but by the way we’re not going to put any fungibility clause in, so you can just move the money around, it’s fine — or just write us something assuring — for every dollar we give Israel to do x, we free up another dollar to do annexation. That’s the idea of fungibility and I didn’t get any sense reading Congressman Van Hollen’s comments, he did not say in any way that he was ready to see any offset like that. That doesn’t mean he isn’t, but he didn’t say he was.

P.S. Friedman ended her remarks by saying that progressives/liberals need to destroy the claim that it is antisemitic to support BDS. You need to be on the offensive against such efforts, even if you don’t support BDS.

*Featured Image: A man waves a Palestinian flag in front of the Ofra settlement in the occupied West Bank, near Ramallah. Issam Rimawi | Flash90

Philip Weiss is Founder and Co-Editor of Mondoweiss.net.