by Ann Garrison, published on Black Agenda Report, May 6, 2020

The authors recount and document the descent into “post-truth” partisan journalism from the alt-right to the right, liberal, and even independent left media, between 2016 and now.

“Team Clinton had imagined Trump would be the easiest Republican to beat, but the strategy backfired.” 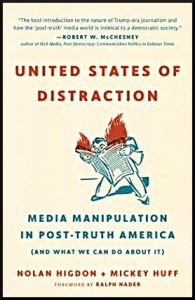 The complete title of Mickey Huff and Nolan Higdon’s book is United States of Distraction: Media Manipulation in Post-Truth America (And What We Can Do About It). Their story begins in 2016, when Donald Trump was slaughtering all reason with his racist and nativist appeals to those left behind by the globalist deindustrialization of America. Male dominance, misogyny, and homophobia were part of the package. An earthquake had already split the country, and Trump widened the fault. He even urged fanatics to beat up dissenters at his rallies.

Bernie Sanders was making a more rational appeal to those left behind and those struggling under student and medical debt, and/or fearful of climate change, but cable news and public affairs hosts were under orders not to cover his campaign. Network TV execs were ecstatically raking in advertising revenue as the world tuned into the Team Trump spectacle. “The money’s rolling in, and this is fun,” said CBS CEO Les Moonves. Neither he nor his fellow mass media masters seemed to suspect that Trump, aided by the $2 billion of free coverage they were giving him, might actually win the election.

But he did, and we all know what happened next. Liberal media, academia, and punditry gasped in disbelief, aghast that President Donald Trump had become reality, not just the reality TV show they’d all been laughing at. Team Clinton had imagined Trump would be the easiest Republican to beat, but the strategy backfired. Oh my God.

Then Trump Derangement Syndrome swept through the liberal intelligentsia and its audience like a crack epidemic.

“Cable news and public affairs hosts were under orders not to cover Sanders’ campaign.”

The mortified Democrats blamed Wikileaks and Russia, and alleged that the two had collaborated. Fifteen US intelligence agencies produced a report that Russia had somehow “interfered” in our election and thrown it to Trump. In December 2016, the Washington Post reported erroneously that Russian hackers had penetrated the United States electric grid by attacking a utility company in Vermont, and by the end of January 2019, Rachel Maddow was warning  the entire Midwest that Russia might switch off their heat in the dead of winter.

“The Resistance” to all things Trump arose, led by California’s glassy-eyed Orange County Congressman Adam Schiff, who all but immolated in his own self-righteousness on the House Intelligence Committee. Schiff said he’d talk to Julian Assange when he was in custody, not before, but Assange has now been in Britain’s Belmarsh Prison for the past year, and there’s no sign that Schiff will reach out before he’s extradited or left to rot in prison, if then. Why speak to the person you’re investigating when you’re already sure he’s guilty?

Mickey Huff and Nolan Higdon recount and document the ensuing descent into “post-truth” partisan journalism from the alt-right to the right, liberal, and even independent left media, between 2016 and now. At first I thought, “Oh please, don’t drag me through this again. I was there. I even read the Mueller Report, which literally began with the a priori assumption of the Russian interference it was supposed to prove.” In 2016, the Oxford Dictionary named “post-truth” Word of the Year and defined it as “relating to or denoting circumstances in which objective facts are less influential in shaping public opinion than appeals to emotion and personal belief.”

But I kept reading the first chapters of United States of Distraction, and it was a mercifully short, concise summary, including footnotes for those who might like to delve deeper into the particulars of partisan journalistic degeneracy.

Texas Observer contributor Michael Hardy wrote a nasty review of the book, which couldn’t have done more to prove Huff and Higdon’s point. It’s headlined “Book Review: Scapegoating the Media Ignores Other Major Problems in American Politics, ” and Hardy’s conclusion is, “Whichever candidate emerges from the Democratic primaries will have to battle Trump in the existing media environment, with the existing weapons. In other words: Stop whining and start fighting.”

And what we can do about it

The second half of United States of Distraction is actually optimistic, as Huff and Higdon must be. Higdon is a Media Studies and History Lecturer at California State University of the East Bay, and Huff is a professor of history and social science at Diablo Valley College, also on the east side of San Francisco Bay. They’re committed to teaching their students to critically reason in hopes that critical education and journalism, perhaps even collaboration between the two, can cultivate evidentiary standards and media literacy. They dedicate their book to their students:

“To our students, past and present, with an eye to the future. Thank you for helping us become more compassionate listeners and empathetic counselors, as well as better teachers and sharper critical thinkers. This book is the product of our interactions with fellow students, educators, activists, and journalists, and is drafted in hopes for a better, more informed, critically engaged society.”

This is not to say they don’t understand that saving America from stupidity is a herculean task:

“This downward trend has been reflected in U.S. political discourse as well. For example, since Abraham Lincoln’s presidency, U.S. presidents have gone from speaking at a high school level to using roughly a sixth-grade level today. An analysis of presidential candidates’ speeches by researchers in Carnegie Mellon University’s Language Technologies Institute (LTI) found that most candidates used words and grammar typical of students in grades six through eight, though Donald Trump tended to lag behind the rest. Of the past fifteen U.S. presidents, President Trump has demonstrated the lowest level of spoken literacy.”

“Most candidates used words and grammar typical of students in grades six through eight.”

Mickey Huff directs Project Censored , a pioneering and hugely successful media literacy project founded by sociology professor Carl Jensen  at Sonoma State University, to the north of San Francisco Bay. Every year Huff, his colleagues, and their students review submissions and choose the Top 25 Censored Stories  of the year. For the year 2018-2019 the top five are “Justice Department’s Secret FISA Rules for Targeting Journalists ,” “Think Tank Partnerships Establish Facebook as Tool of US Foreign Policy ,” “Indigenous Groups from Amazon Propose Creation of Largest Protected Area on Earth ,” “US Oil and Gas Industry Set to Unleash 120 Billion Tons of New Carbon Emissions ,” and  “Modern Slavery in the United States and around the World .” I recommend reading the whole list every year.

And it is cause for optimism, or at least “pessimism of the intellect, optimism of the will,” that Huff, Higdon, and their colleagues were able to organize 283 college students and 24 professors from 15 college and university campuses across the US to review 300 submissions and choose the 25 stories on this list, and that the project has expanded every year since Carl Jensen founded it in 1976. It’s also worth noting that these student reviewers and faculty are not privileged Ivy Leaguers training to rule the world or manage it for its rulers. Thus far, participants have been from community colleges and state colleges and universities from coast to coast.

“These student reviewers and faculty are not privileged Ivy Leaguers training to rule the world or manage it for its rulers.”

May their numbers grow and may they, as Huff and Higdon put it, “make America think again.” May all educators who hope to teach critical reasoning read The United States of Distraction. It’s full of good ideas. May a thousand Project Censoreds arise to defeat the scourge of unreason and distraction that is so shamelessly cultivated by the oligarchs  who own most all the media and use it to serve their own interests.

United States of Distraction: Media Manipulation in Post-Truth America (And What We Can Do About It) can be ordered directly from its publisher, City Lights Press .

Ann Garrison is an independent journalist based in the San Francisco Bay Area. In 2014, she received the Victoire Ingabire Umuhoza Democracy and Peace Prize for her reporting on conflict in the African Great Lakes region. She can be reached at ann(at)anngarrison.com