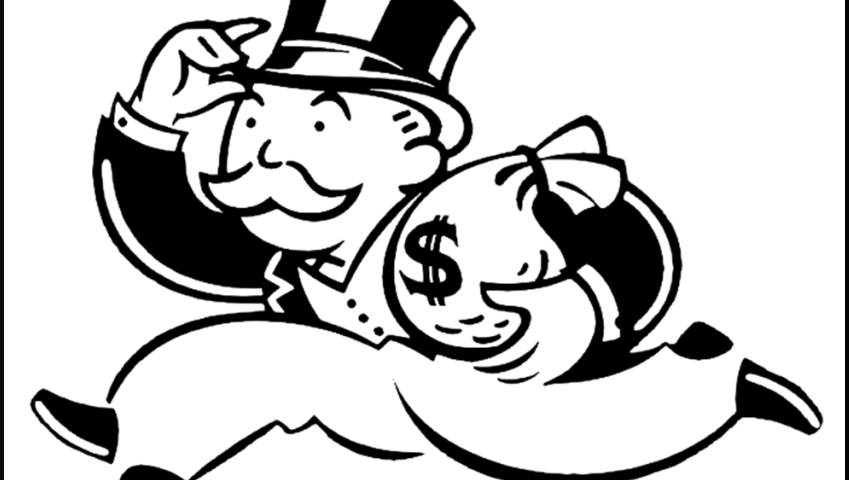 by James Fortin, published on Socialist Action, May 3, 2019

“The thieves did not even have to show their guns. The door was unlocked, and the till was left wide open. The robbers just scooped up the cash and left. Surely, the thieves had help. It was an inside job.”

This not-so-imaginary account of a heist perfectly describes what corporations and the well-connected rich have just done in the U.S. during the present economic meltdown. With assistance from their Democratic and Republican co-conspirators the corporate bandits have stuck up the nation.

At the same time this corporate thievery unfolds, upwards of 30 million working people have been laid off from their jobs, losing their employer-sponsored health insurance – if they had it in the first place. Many of these souls, living paycheck to paycheck, line up early at the food banks in hopes of being fortunate enough to bring home a box of food to help feed their families. Millions have been unable to get through phone queues and collapsed websites to even make a claim for unemployment benefits, weeks after losing their jobs. Most are desperate, not knowing how they will pay their rent, and fear they could become homeless. Still others are denied relief because they are immigrants, married to an immigrant, or are undocumented.

While suffering workers are waiting for their minuscule relief, hundreds of corporations and banks are having a head-over-heels feeding frenzy at the cash watering holes set up for them by the U.S. Treasury. Casting aside any moral qualms about using up federal monies approved by Congress which could help struggling, genuinely-small enterprises to keep their operations running and employees on staff, corporations instead have sniffed the truffle in the pig pen and plucked it to the tune of an initial $349 billion. Examples abound.

AutoWeb’s chief executive received nearly $5 million over the past 2 years in compensation.  This year, however, his company applied for and obtained a $1.4 million forgivable loan under the Paycheck Protection Program (PPP); it then paid him $1.7 million a week later. Legacy Housing, a Texas modular home builder, received $6.5 million two weeks after publicly disclosing it had a $25 million cash reserve. MidMedx, a biopharmaceutical firm in Georgia, settled wrongdoing cases for $1.5 million in 2019 and another for $6.5 million just this year, before securing $10 million under the program a few weeks later. The sad list of corporate greed goes on and on.

In these and all other applications under the PPP, “small” companies of up to 500 employees merely had to certify that “current economic uncertainty makes this loan request necessary.” Using high-priced lawyers and well-connected top-shelf banks, these “small” companies easily slid through the daunting paperwork to the front of the line. The monies were quickly transferred to these applicants by the Small Business Administration, and, of course, banks like JPMorgan Chase, Well Fargo and Bank of America made huge commissions for handling the deals – totaling $2 billion to date, according to the New York Times.

Just as workers are seeing little result from the corporate bailouts, the really small mom-and-pop businesses never had a chance for help the first time around either, and are waiting to see how they will fare in the next $310 billion round of monies which Congress just approved.

Some of the recipients, such as the Los Angeles Lakers, large restaurant chains, and a significant number of well-endowed colleges and universities, have been publicly shamed for applying for the millions and have said they will return the funds. However, as of late April, more than 100 companies have received in excess of $2 million apiece under the PPP – many of them got significantly more. Most of them – 80% plus – said they would keep the money, thank you, which they obtained fair and square according to the rules. After all, you know, they did fill out their certifications.

In addition to the Paycheck Protection Program another Christmas-in-April giveaway to the rich was made available in the $2 trillion bailout, this one for “large” companies. A tidy sum of $500 billion will be administered by the Federal Reserve Bank and the Treasury Department. In this program, the government will purchase bonds issued by the corporations, thereby transferring cash to the companies as “emergency aid” for “liquidity purposes.” In plain language, this is an acquisition of large corporate debt by the government with absolutely no requirement for the recipients to limit executive compensation, dividends or stock buybacks – or for that matter to save a single job.

“I am struck that the Administration is relying on the goodwill of the companies receiving this assistance.”

Gregg Gelzinis of the Center for American Progress was more forthright in his analysis:

“…if we are going to provide taxpayer funding to private industry, we need conditions to make sure it is in the public interest. This violates that principle.”

Treasury Secretary Steven Mnuchin provided his explanation of why no restrictions were placed on the corporate money-takers: they could avoid the rules, so they did. “This was highly discussed on a bi-partisan basis. This was thought through carefully. What we agreed upon was direct loans would carry the restrictions, and the capital markets transactions [bond buying] would not carry the restrictions.” Have that read: Another sweet deal for the 1% jointly endorsed by Democrats and Republicans alike. If past history offers any guidance, these disguised loans will likely be forgiven by Congress in any event, just as they were in the 2008 financial crisis bailout.

One might think the contrast between the economic state of workers and that of corporations could not be greater. Unfortunately, it gets even worse.

It is estimated that a third of renters in the country are no longer able to make their monthly rent payments. Others place the number at 40 to 50%. Although a number of state governments and municipalities have enacted assorted measures to keep renters from being evicted, temporarily, for failure to pay rent, working people mostly get advice instead of real assistance. They are told to talk to their landlords to find some relief. Not much help is offered, just words of wisdom.

On the other hand, what has been termed by the mainstream media a “bonanza for rich real estate investors” is a provision slipped into the recent $2 trillion bailout bill passed by Congress. The fine print of the bill, found on just a single page of the 880-page document, is a small change in tax policy regarding real estate depreciation. It will hand wealthy real estate tycoons and their corporations a gift of $170 billion in additional tax savings over 10 years. While the Democrats and Republicans approved the bailout including this provision, it is virtually assured that the same magnitude of largesse will not be provided to tenants.

Socialists always are frank in describing the attributes of capitalism, so let us do just that. The financial windfalls going to corporations and the ruling rich during this Depression are really grand theft on a national scale. The bandits have been unmasked, and it is the usual inside job performed by Democrats and Republicans together who have left the till unlocked and wide open.

As socialists we cannot be shocked by the plunder of the ruling rich, enabled by their twin parties of capital. It is part and parcel of a system loaded up front to serve the interests of the 1% at the expense of everyone else. We are, however, committed to ending capitalism and replacing it with the new socialist society that will abolish, once and for all time, the devastating diseases, cycles of economic ruin, human tragedies and oppression of humankind in all its forms. Let us include the basic unfairness of outright corporate thievery, too.

When racketeer Al Capone was finally sent to prison, it was on the grounds of tax evasion – not bootlegging, his primary business. Unlike today’s corporations, Capone apparently did not have political stooges in Congress to make his crimes legal – like the bandit corporations do today – thereby sending him to the clinker. And while the ill-gained monies received by likes of JPMorgan Chase and the rest of the capitalist cabal will serve no useful social function, at least Capone provided bootleg liquor during Prohibition to the working and unemployed poor of Chicago, making their experiences during their Great Depression just a bit more tolerable.