he number of official global coronavirus mortalities surpassed a quarter of a million people today, including over 69,000 in the U.S. (although this is very likely an undercount). Polls show that the American people are extremely worried about contracting the virus. However, the government has a much bigger concern: that if they find a COVID-19 vaccine, China will copy it and distribute it for free.

To many, it will not be immediately clear why it would be a problem for a manufacturing superpower, home to 1.4 billion people, to inoculate itself and others. But to the White House, this would be “stealing” a potential American innovation.

“Biomedical research has long been a focus of theft, especially by the Chinese government, and vaccines and treatments for the coronavirus are today’s holy grail,”

“Putting aside the commercial value, there would be great geopolitical significance to being the first to develop a treatment or vaccine. We will use all the tools we have to safeguard American research.”

The fact that intellectual property and the profits of multinational pharmaceutical corporations are officially being put before saving lives, even during a pandemic threatening the entirety of humanity, was not mentioned by The New York Times, who covered Demers’s remarks.

Dean Baker, Visiting Professor of Economics at the University of Utah and Senior Economist at the Center for Economic Policy Research in Washington, D.C., offered an alternative view, claiming that he would be delighted if China “stole” vaccine technology and gave it to billions of people, telling MintPress News that:

The coronavirus pandemic is a clear instance in which the whole world shares a common interest in developing and distributing a vaccine. This should mean that we have open research, where all findings are posted on the web as quickly as possible, so that they can build on them. Once a vaccine is developed we should want it spread throughout the world as quickly as possible at the lowest possible cost. Trump’s concern that China would somehow “steal” a vaccine means that he is more concerned about protecting someone’s profits here, as well as possibly an ego trip (we’re number one) than possibly saving hundreds of thousands of lives.

Baker has previously advocated for replacing the system of private medical research with a publicly-funded open source system that he believes will not only save lives but will save money. 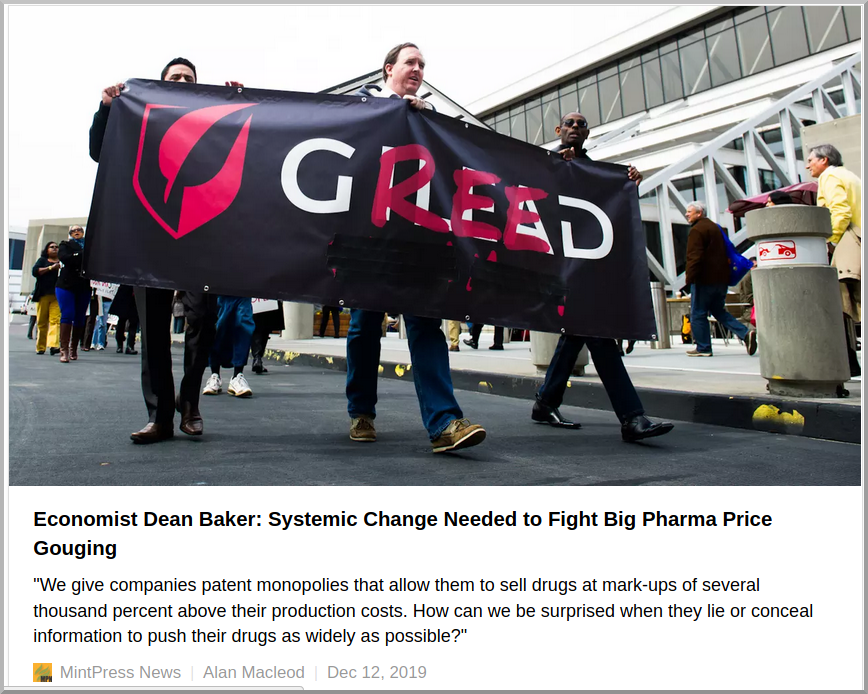 That the U.S. government is accusing other nations of hypothetical theft during the pandemic is particularly noteworthy, seeing as it leads the world in the confiscation and detention of medical supplies paid for and bound for other countries. Barbados, for example, has accused the Trump administration of “modern piracy” after it blocked a shipment of 20 ventilators to the island, instead, keeping them for itself. U.S. officials also hijacked a plane full of 60 million masks bound for France while on the runway of a Chinese airport. Meanwhile, at the height of the pandemic, an American military plane mysteriously managed to fly back to Tennessee with half a million test kits from Lombardy, Italy.

American pharmaceutical corporations have also been testing out their products on Chinese COVID-19 patients, hoping to better understand what works as an effective treatment. In March, the Trump administration attempted to compel a German pharmaceutical corporation to move production to the U.S. in order to make sure that America alone had access to and control of any coronavirus vaccine it might produce. The president reportedly wished to ensure that it would only be available on a for-profit basis. “Germany is not for sale,” the country’s outraged economy minister replied, rejecting the profit motive.

In the early 1950s, American scientist Jonas Salk pioneered a world-changing vaccine against polio, a deadly disease that tens of thousands of Americans contracted annually. Instead of patenting it and making a fortune, he insisted that his invention belonged to all of humanity. By 1994, polio was eradicated in North America. Yet 70 years later, the logic of capitalism dictates that where there is great utility, there are enormous profits to be made, and anyone acting outside that system to reproduce a vaccine is not acting responsibly, but “stealing.” The fact that Washington wants to limit those who can drink from any “holy grail” it might find to those who can pay for it shows how far we have come from Salk’s days.

*Featured Image: President Xi Jinping learns about progress in the research for a vaccine for novel coronavirus pneumonia during his visit to the Academy of Military Medical Sciences in Beijing on Monday. He also visited Tsinghua University School of Medicine. JU PENG / XINHUA

Alan MacLeod is a MintPress Staff Writer as well as an academic and writer for Fairness and Accuracy in Reporting. His book, Bad News From Venezuela: Twenty Years of Fake News and Misreporting was published in April.