Call initiated by the One State Assembly, February 9, 2019 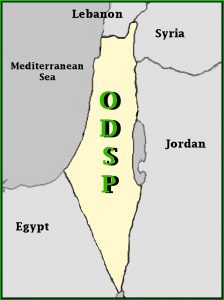 We are calling for signatures on the statement which is an attempt to create national and global public opinion specially among Palestinians, Arabs and international supporters about the genuine, just and long lasting solution to the seven decades of the ethnic cleansing war and catastrophe of 1948. The One Democratic State of Palestine (ODSP) initiative stands in opposition and objection to the dead solution of the two states, the Oslo Accords and exposing the latest racist Nation-State Law that was issued by the apartheid state of Israel which emphasizes the real nature of this manufactured colonial state.

We are reaching out to individuals and organizations everywhere on this globe to mobilize them all to stand by our side in this struggle process according to a plan of action (more information will be sent in a separate email) that suits all according to their abilities and skills.

For example, we need writers to write, supporters to air their opinion on alternative, progressive and mainstream media, to approach MPs, members of congress,  and political parties.

This is a crucial time in the history of our struggle, which needs all activists, individuals and organizations, to consolidate and coordinate their efforts in an organized manner to make an impact, make a difference towards the only solution that guarantees the right of return and deals with our people as one united nation on one united homeland: the One Democratic State of Palestine.

We say YES to the just national struggle for our rights, which unifies the living energies of our people. We are inspired by our glorious history, our great leaders and their decisive battles, our martyrs, our prisoners, our restless youth and those in refugee camps, waiting on the realization of their inalienable right of return. We say NO to begging at the doors of the occupiers in pursuit of crumbs. This has led Palestinians and will lead them to more division and bloody infighting

Palestine was colonized for strategic, imperial reasons: it is at the junction of three continents, with key transport links and easy access for the hegemonic powers on their way to the oil wealth of the Arab nations. But the colonists could not evacuate the Palestinian people, who have lived here for more than 6,000 years.

After a century of dealing with the European colonial states and American imperialism, our Arab nation has been betrayed, and is still being betrayed, by the terror of these countries.

The illusion that Zionists want peace must be confronted. When will we wake up? We cannot speak of a national state for the Palestinians if we do not liberate ourselves from our petty differences while under siege and occupation. We have to recognize reality: that we continue in a period of national liberation, not in a period of state building.

For this reason we believe in the need to withdraw completely from farcical negotiations with the colonial entity. These only cover up and legalize the occupation. They suggest fair solutions which don’t exist, deepening Palestinian conflicts and leading to bloody infighting.

The national liberation stage must precede the construction of the national state. Recognizing this provides a compass to guide us in our national priorities and relations with others. This means no more agreements with the occupiers. They will not commit to agreements, and experience shows they are part of a great deception, falsely called a ‘peace process’.

This ‘Peace Process’ became a façade for the colonial entity to proceed with a so-called ‘political solution’. Really, they needed Palestinian participation to pave the way for the oppressive Arab regimes to end the boycott and ‘normalize’ relationships with the entity.

As Arab markets were closed to the Zionist entity by a blockade, it was necessary to find ways to open them through ‘normalization’. But Palestinian resistance had generated popular sympathy in the Arab and Islamic world, and formed a major obstacle to this ‘normalization’. Zionist leader Shimon Perez admitted:

“The main goal of the Oslo conventions was not Palestinians, but rather normalization with the Arab world and opening its markets.”

Yet national liberation requires confronting, not submitting to, foreign hegemony. We say that the leadership of our national movement has ignored this, and has instead engaged in binding relations with the occupying entity and its patrons.

The history of the colonial entity in Palestine is nothing more than a history of the destruction of the Palestinian people and their civilization. Two thirds of our people have been displaced and more than 90% of our land has been stolen. Our land, water and houses are stolen and demolished every day, while apartheid walls are built and the racist nation-state law is being enforced by Israeli legislators. There is also a permanent aggression against the peoples of the region, to subjugate them through Salafist terrorism and economic siege.

The USA supports the Zionist entity with money, weapons, missiles and aircraft, while protecting it from punishment at the UN, recognizing Jerusalem as the capital of Israel, abolishing its financial support for the United Nations Refugees and Work Agency (UNRWA) and halting its financial aid to the Palestinian Authority. How can the USA or its regional puppets ever be ‘honest brokers’ for the people of Palestine?

The invaders falsely used divine religion in attempts to destroy the indigenous people and their cultures. They said this was an ‘empty land’, available for another people with no land, but with the ‘divine promise’ of a religious homeland. Yet hiding settler colonization behind the banner of Judaism wrongly places responsibility on religion for the crimes of the colonizers.

We have no problem with ‘Jewish’ people in Palestine. That problem emerged in capitalist Europe, not in our countries. We are not the ones to create a solution to Europe’s ‘Jewish problem’. Rather, we have to deal with colonization and foreign hegemony in our region.

The colonial entity and its imperial patrons have brought the people of Palestine to a historic juncture. We, the residents of historic Palestine, must dismantle the terms of our collective extermination so as to set up relations which reject racial segregation and mutual negation. We must dismantle the closed structure and replace it with an open, non-imperial and humane system. This can only be achieved by establishing One Democratic State of Palestine for its indigenous people, the refugees who we were forced out of the country and its current citizens. This is the key to a ‘fair and permanent solution of conflict’ in the region, and to a ‘just solution’ for the Palestinian cause. Failing this, war and mutual destruction will continue.

Yet the old Palestinian leadership has presided over regression. They make agreements for the benefit of the colonial entity and its patrons. They abandon 1948 Palestine and the refugees. They collaborate with our enemies while delivering no tangible benefit for our people.

For these reasons we say that this leadership has become a real obstacle to any future development or advancement for our people. This leadership has lost its qualifications to lead national action. It looks to its own benefit and is too weak to learn the lessons of the anti-colonial movements of the peoples of Asia, Africa and the Americas. It does not see the advances elsewhere in challenging US hegemony. It does not even see the resistance in the Arab and Muslim World, when they manage to foil US and Zionist projects.

Our movement must be an organic part of the Arab Liberation Movement, putting an end to foreign hegemony, achieving national unity and liberating Palestine from the current apartheid system. Yet this great humanitarian goal directly clashes with the interests of the dominant triad – the forces of global hegemony, settler apartheid and the comprador Arab regimes.

We warn all against chasing the myth of ‘two contiguous states’ in Palestine. This is a major deception, to portray ethnic enclaves within Palestine as an expression of the right to popular self-determination. The goal must be to replace apartheid with equal citizenship and this can only be achieved by establishing One Democratic State in historic Palestine for all, including its indigenous people, the refugees who we were forced out of the country and its current citizens, including those who were drawn into the country as settlers through the Zionist project.

Palestinian parties negotiating for unity and reform should focus on restoring liberation to the core of the Palestinian National Charter. The Arab homeland will never be liberated and unified by subordination to the USA! It will only be liberated by confronting and ending colonial and imperial dominance.

We say YES to national unity in the framework of our Palestinian Liberation Movement, freed from deceptive agreements which only serve the hegemonic powers and comprador regimes.

LONG LIVE PALESTINE, liberated from racial colonization and built on the foundations of equality for all its citizens, rejecting segregation and discrimination by religion, culture or ethnicity; friends with its regional neighbours and with all progressive forces of the world!