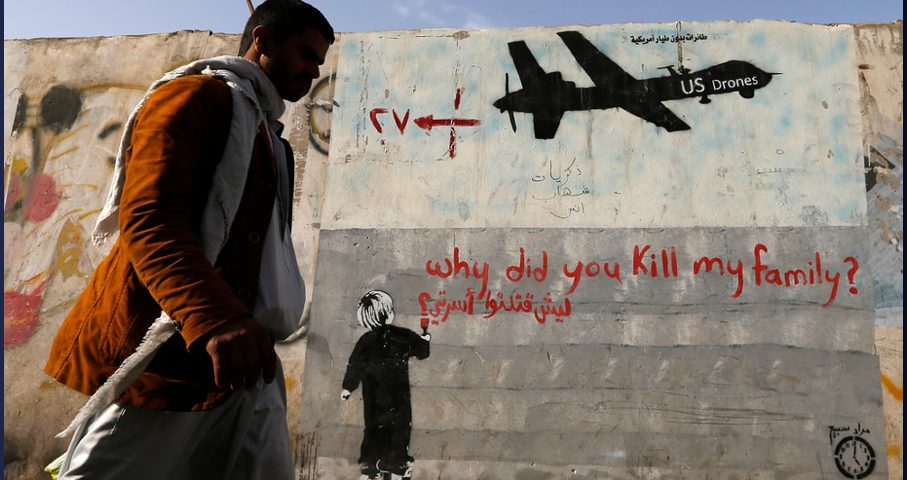 Image: A man walks past a graffiti, denouncing strikes by U.S. drones in Yemen, painted on a wall in Sanaa November 13, 2014. Yemeni authorities have paid out tens of thousands of dollars to victims of drone strikes using U.S.-supplied funds, a source close to Yemen’s presidency said, echoing accounts by legal sources and a family that lost two members in a 2012 raid. REUTERS/Khaled Abdullah

On November 14, the Republican majority in the U.S. House of Representatives blocked a resolution that its supporters say would end U.S. participation in the war and famine in Yemen. It is unclear, however, what effect this resolution would have on the ground even if it were passed into law. It imposes no limits on arms sales to Saudi Arabia or the United Arab Emirates. It does not propose any oversight or limitation of activities CIA or of private contractors from the U.S. in Yemen. The resolution is based on a time table that does not reflect the dire urgency to end the war in Yemen, where almost two months ago the United Nations’ humanitarian chief warned “We may now be approaching a tipping point, beyond which it will be impossible to prevent massive loss of life as a result of widespread famine across the country.” Further, the resolution provides exemptions for continued hostilities conducted directly by U.S. with drones and Special Forces.

Limited as it is to removing “U.S. Armed Forces from hostilities,” one might even agree with Republican leadership that with the mutual decision that the U.S. stop refueling Saudi war planes, the resolution is moot, even as the war and famine continue. If the resolution were allowed to pass, there would be a 30-day window between the date when the bill might be signed into law and when it would take effect, in which time millions of Yemenis might succumb to famine.

House of Representatives Concurrent Resolution 138, introduced in the House,

“Directs the President to remove U.S. Armed Forces from hostilities in Yemen, except for Armed Forces engaged in operations authorized under the 2001 Authorization for Use of Military Force, within 30 days unless and until a declaration of war or specific authorization for such use has been enacted into law.”

Senate Joint Resolution 54 is even more explicit and generous in its exception allowing U.S. aggression to continue in Yemen:

“This joint resolution directs the President to remove U.S. Armed Forces from hostilities in or affecting Yemen, except those engaged in operations directed at Al Qaeda, within 30 days unless: (1) the President requests and Congress authorizes a later date, or (2) a declaration of war or specific authorization for the use of the Armed Forces has been enacted.”

An AP report produced in partnership with the Pulitzer Center on Crisis, “The hidden toll of American drones in Yemen: Civilian deaths,” was released on November 14.

“The AP account gives a glimpse, even if incomplete, into how often civilians are mistakenly hit by drone strikes, at a time when the Trump administration has dramatically ramped up the use of armed drones. It has carried out 176 strikes during its nearly two years in office, compared to the 154 strikes during the entire eight years of the Obama administration, according to a count by the AP and the Bureau of Investigative Journalism. The AP based its count on interviews with witnesses, families, tribal leaders and activists. Most of those killed, 24, were civilians; at least 6 others were fighters in pro-government forces — meaning ostensibly on the same side as the U.S. — who were hit in strikes away from the front lines while engaged in civilian life.”

Exceptions for “those engaged in operations directed at Al Qaeda,” or in the House version, “Armed Forces engaged in operations authorized under the 2001 Authorization for Use of Military Force,” ensure that U.S. drones strikes in Yemen will continue. The resolution before Congress will also permit U.S. Special Forces attacks on Yemen to continue unchecked, such as the raid on Yakla in January, 2017, in the first days of the Trump administration that killed 25 civilians, including nine children under the age of 13 and one U.S. Navy Seal.

In the current political reality, there is no room in Congress to resist U.S. participation in the Saudi-led war in Yemen without at the same time endorsing the 2001 Authorization for Use of Military Force, a blank check that has allowed for the destruction of whole nations and a manifold increase in the threat of terrorism. The Authorization was a disgraceful obfuscation by Congress when it was passed in 2001 and it has no place in a plea for peace in Yemen in 2018. So long as the 2001 Authorization provides an exception and the profitability of arms trafficking in the region goes unchallenged, there is no congressional resolution for peace in Yemen.

The leaflet prepared by Voices for Creative Nonviolence and distributed at the United Nations, the U.S. Mission to the U.N. and the Saudi Consulate in New York on November 6, 7 and 8, reads:

“We call on all parties in this conflict to immediately and permanently end all military and economic assault on Yemen. We urgently demand that the U.S permanently withdraw from warfare half a world away in Yemen, starting now. The U.S. request for a ceasefire to begin in 30 days, in which time many thousands will die, has been met by the Saudis with a surge of violence directed at (the port of) Hodeidah.”

It is especially shameful that a resolution as weak as H.Con.Res.138 is having trouble even being brought to the floor for discussion. Getting this resolution passed may be a step along the way, but it cannot be the goal. Support for this legislation needs to be accompanied by a somber recognition of its limitations and with the uncompromising and urgent demand that the U.S. end the war in Yemen now.

Brian Terrell is a co-coordinator for Voices for Creative Nonviolence and lives on a Catholic Worker Farm in Maloy, Iowa.