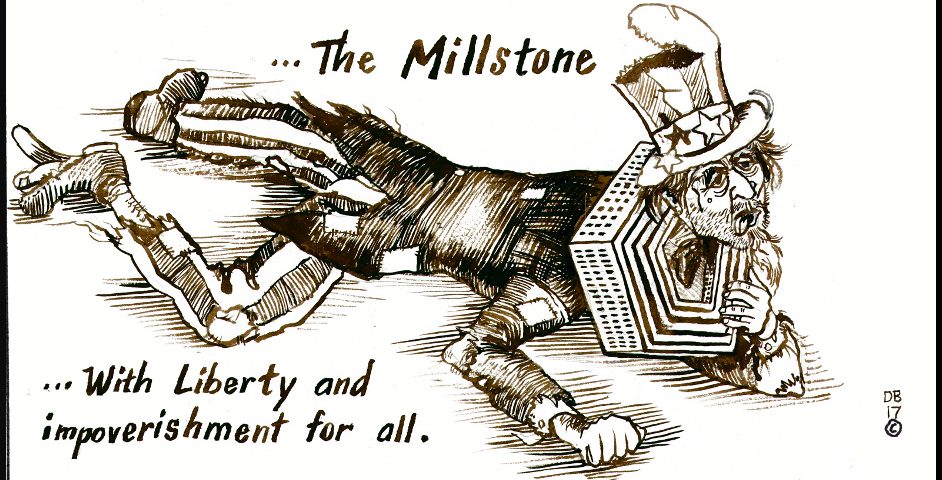 The deep divisions that have defined American politics in the era of President Trump played out across the country in Tuesday’s midterm elections, as Democrats scored victories in key races in Republican-held suburban House districts but ran into a wall of opposition in red-state Senate contests.

A change in the balance of power in the House would represent a pulling back from the president by key parts of the electorate, particularly by female voters. That alone could have a significant effect on the second half of Trump’s first term, particularly in Washington.

But the overall voting patterns in House, Senate and gubernatorial contests signaled that the differences and divisions that have defined the country during Trump’s presidency remain and seemingly are growing stronger. That sets the stage for a contentious and competitive presidential election two years from now, with the stakes now higher than ever.

The House takeover represents a significant change in the status quo in Washington. But it might end up doing little to affect the overall shape of an America deeply divided over the leadership of the president.

Continuing their long-standing trend of approving requests to borrow money for big needed projects, Maine voters on Tuesday approved all four bond questions on the state ballot. Mainers supported borrowing $200 million for roads, bridges, college campuses and sewer and water system upgrades.  The interest on the bank loans will be saddled on the future generations.

This growing trend of borrowing money by impoverished states across the nation has become necessary because the federal government has continually reduced the amount of funds it offers states and local communities for infrastructure repair, education funding and social programs.

Instead the national treasury increasingly is poured into the Pentagon budget – now at least 54% of every discretionary tax dollar goes into the military coffers.  That leaves little else for states and local communities who have to tie their future to loans from the Wall Street banksters who make huge profits on the interest.

A friend of mine, Pat Elder from Maryland, ran for Congress as a Green Party candidate against Rep. Steny Hoyer – the Democratic Party Whip in the House of Representatives. Pat got 1.3% of the vote while Hoyer (Nancy Pelosi’s right-hand man and a big time warmonger) got 70% of the vote.

I had the opportunity on a few  occasions to publicly advocate for shutting down NATO. Hell, I don’t think most voters know what it is. As I’ve gone door to door in the most impoverished areas 80 miles south of Washington I’ve discovered many are concerned about Russians and Chinese and Koreans attacking and they’re worried about mobs of foreigners rushing the borders and taking their jobs away. Almost all are enthusiastic about increasing military spending. They don’t see the connections. I’ve been laughed at and scorned.  There’s a lot of work to be done educating the American public on matters of war and peace.

Historian and progressive activist Howard Zinn wrote about elections in 1979.  He said in part:

The multiple choice test is here again. Sure, there are better candidates and worse. But we will go a long way from spectator democ­racy to real democracy when we understand that the future of this coun­try doesn’t depend, mainly, on who is our next president. It depends on whether the American citizen, fed up with high taxes, high prices, unem­ployment, waste, war and corruption, will organize all over the country a clamor for change even greater than the labor uprisings of the ’30s or the Black rebellion of the ’60s and shake this country out of old paths into new ones.

I watched the elections returns on TV long enough to see where the state and national trends were going before heading to bed.  I was struck once again by the long lines of people waiting to vote and the numerous stories about Republican efforts to obstruct voting – particularly in the south to keep blacks and Hispanics from impacting key races in places like Texas, Georgia and Florida.  It appears the obstructionist strategy worked quite well once again.

It’s really telling as Washington preaches about freedom and democracy that we witness how millions of people are kept from exercising their constitutional right to vote.  Maybe we need some country to invade the US to liberate the American voters.  How about throwing some economic sanctions on the US until we stop denying people their fundamental right to vote?  You think BBC will cover this story?

The election analysts say that Democrats were able to recapture the House of Representatives because people (mostly women) in the suburbs across the nation and independents voted for them as a rejection of Trump’s divisive politics.  The Republicans continue to own the rural American voter.

Many of the new Democrats who will join the House of Representatives are former US military and CIA personnel.  The Democrats made sure that they selected these types as candidates in order to ‘compete’ more effectively with the conservatives.  But in the end I can’t help but wonder if the newly elected Democrats will eagerly vote to continue our many wars around the world and our steroidal military budget.

How can the Democrats say they want to ensure health care for all, education funding, fix our crumbling infrastructure and at the same time keep feeding the war machine?

I left half of my ballot blank yesterday when I walked to the polls in the rain and did my citizen duty.  Our two local Maine state legislative candidates from Bath (House and Senate) were the women who sponsored the General Dynamics (Bath Iron Works) $60 million tax cut bill that we campaigned against last winter.  While we were able to trim $15 million from it before it passed the state legislature I can’t forget that it was these two ‘liberal Democrats’ that pushed that bad bill that stole from children who go to bed hungry in our state.  I heard a radio ad days ago by one of the women where she took credit for ‘helping to fund’ the construction of expensive and provocative destroyers at our local shipyard.

There is no doubt in my mind that the real winners in this election cycle are the corporate oligarchies that control the US.  From bond issues that keep Wall Street banks wealthy, to candidates from both parties who pledge support for the military industrial complex, to voters who swallow the fear-mongering from ‘our leaders’ – the corporate masters have this system under lock and key.

As Howard Zinn would say – what is important now is what the citizens do the day after elections are over.  Today is when the real work of democracy and citizenship begins.  Let it happen now because time is slipping away.