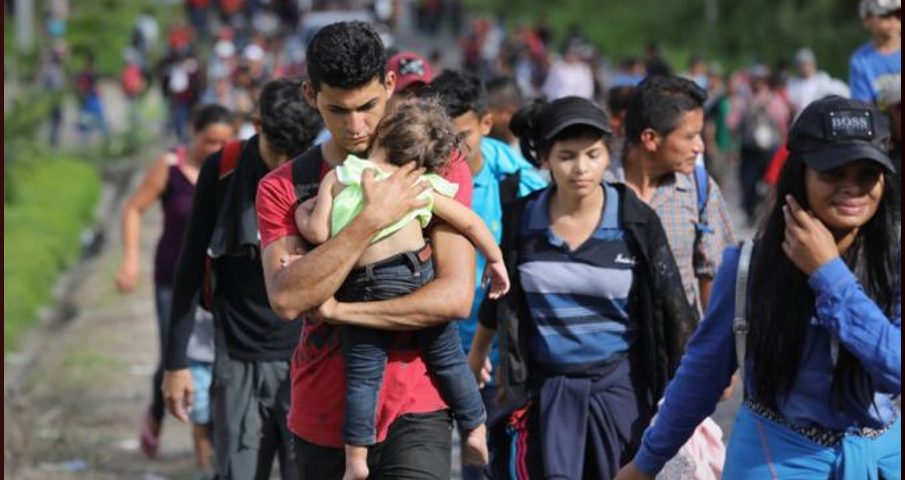 Photo: Members of a migrant caravan walk into the interior of Mexico after crossing the Guatemalan border on October 21, 2018, near Ciudad Hidalgo, Mexico. ~John Moore/Getty Images

by By Sam Ordóñez, published on Workers World, October 24

Oct. 22 — A caravan of thousands of migrants, including small children, traveling to the United States reached the Mexico-Guatemala border on Oct. 19. The caravan had formed on Oct. 13 in San Pedro Sula, Honduras, and arrived in Guatemala a few days later.

When the caravan reached the bridge that connects the Guatemalan city of Tecun Uman to Ciudad Hidalgo in Mexico, immigration authorities refused to let it pass as a group and demanded each person enter alone and register with the authorities.

Refusing to be divided, the caravan members managed to break through the barricade onto Mexican soil, where riot police met them with tear gas and beatings. Nevertheless, the people in the caravan courageously made it across the border and are marching northward, as of Oct. 22.

Recent years have seen a huge influx in migration from Central America’s Northern Triangle (Guatemala, Honduras and El Salvador) to the U.S. What has led so many thousands of people to make the difficult decision to uproot their lives and risk death to travel through Mexico to the U.S.?

One migrant interviewed as the caravan passed through Guatemala described conditions in Honduras:

“What’s hard is waking up in the morning and your child says he’s hungry and you start counting lempiras [the currency of Honduras], while the big companies are throwing away food. What’s even sadder is going to the clinic at night to find them closed because there’s no acetaminophen. When we pay taxes, when those who work can’t even afford transportation, because when gas prices go up, transportation prices go up.” ~Quote posted on Twitter by plazapublica.com.gt

Extreme poverty and violence in Central America are the result of over a century of coups, civil wars and military interventions, all aimed at securing the region for U.S. business interests such as the former United Fruit Co. — now Chiquita Brands. And the pro-U.S. governments violently repress any attempt by the workers and peasants to organize so as to keep labor cheap and profits high.

In 2009, a military coup ousted the progressive, anti-imperialist-oriented government of Manuel Zelaya, over claims he violated the Honduran Constitution by seeking a referendum to allow him to run for a second term. While the U.S. government in public said it opposed the coup, it continued relations with the new government and refused to call for Zelaya’s restoration as president.

The country has since been run by right-wing governments accused of killing activists and journalists. Current President Juan Orlando Hernández actually changed the constitution in 2017 to allow him to be elected to a second term  — an election accompanied by widespread fraud.

Mass mobilizations denounced the fraud and were met with state violence and martial law. Extreme repression and exploitation continue today with the backing of U.S. government and corporate interests.

Migrants in the caravan have directly cited the Honduran government’s anti-worker, pro-transnational policies as the cause of their suffering.

Migrants traveling from Central America don’t feel the effects of U.S. imperialism just in their home countries. As with the current caravan, when they reached the border with Mexico, which they had to cross to reach the U.S., Mexican security forces tried to stop them with teargas but were finally overwhelmed.

Under pressure from the U.S. to stop the caravan, the Mexican government sent federal soldiers to its southern border. This continues a steady trend of the U.S. exporting its own racist border-control policies to Mexico.

Trump has threatened to cut aid to Central American governments if they do not find a “solution” to the crisis. Meanwhile, Trump has made calls to send the National Guard and U.S. military to the U.S.-Mexico border.

U.S. imperialism created the migrant crisis through its exploitation of Mexico and Central America and has effectively declared war on migrants inside its borders. Now, the Trump administration has threatened to close the border, an act that signals his willingness to escalate the crisis into open military conflict.