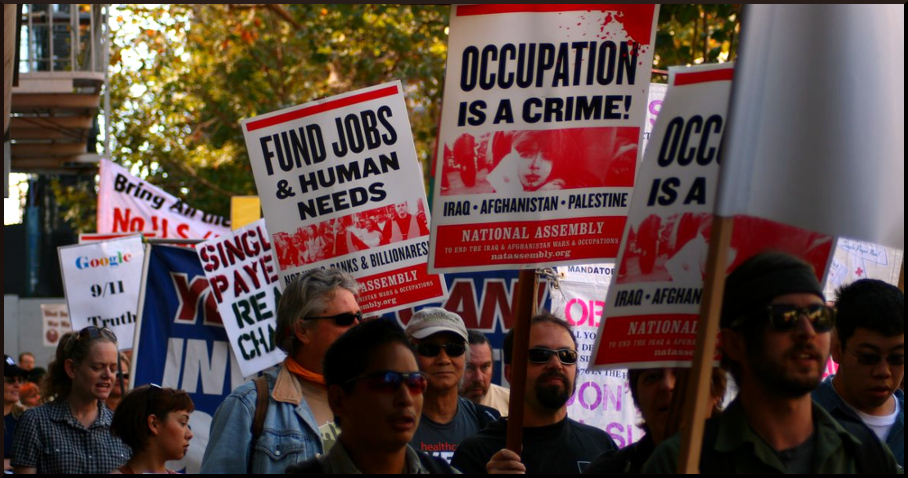 The decision by Democrat party president Harry Truman to bomb the cities of Hiroshima on August 6 and Nagasaki on the 9thwith the newly developed nuclear weapon signaled to the world that the U.S. was prepared to use military force to back up its new-found position as the leader of the Western colonial-capitalist powers, now referred to as the “Western alliance.” The main audience for that grotesque display of racist violence in 1945 was the Soviet Union but some 73 years later, militarism and war continue to be the central instruments of U.S. foreign policy.

This is the lesson we must stress continually as the public is being subjected to a constant barrage of incitements to support the use of military force by the U.S state against a growing array of enemies and potential enemies from Russia and China to Iran and the never-ending war on terror. Working-class and poor people must oppose war in part because they are the expendable cannon fodder used to advance ruling-class dominance under the banner of protecting the “national interests,” which are really only those of the economic elites. Fighting for those interests means killing poor and working-class people in other parts of the world.

In this era of economic warfare between competing capitalist nations and newly forming capitalist blocs, taking an anti-war position is a pro-working class, pro-poor, pro-displaced peasant/farmer, and internationalist position. The economic sanctions (a form of warfare) that the U.S. levies against various nations have nothing to do with concerns for human rights – official rationales notwithstanding – but everything to do with undermining economic competitors and non-compliant states and movements as in Venezuela. It should be clear that supporting U.S. aggression in the form of economic warfare, subversion, proxy war and direct military intervention is in fact supporting the interests of the U.S.-based transnational capitalist class. Yet many leftists have embraced a crude national chauvinism and joined liberals in demonizing various peoples and nations and thus objectively providing support to and political cover for the capitalist/imperialist system that they pretend to oppose.

The structural crisis of international capital is also a crisis of the nation-state, especially in the centers of global capital from London to New York. The imposition of neoliberal economic restructuring in the West generated a crisis of legitimacy for the neoliberal global architecture that was carefully crafted over the last four decades. The post-war compromise between capital and labor that was officially negated with the economic crisis of 1973-75 and the turn to neoliberalism produced the conditions and politics that produced Donald Trump in 2016.

But the crisis of legitimacy also produced something else – a more pronounced dependency by the state on the use of force, be it in the Black and Brown colonized areas where the economically marginalized reside or in the Black and Brown areas of the world that are no longer accepting their suffering as an inevitable and unchanging condition of their existence.

The $717 billion military budget Congress passed that transfers public resources to the pockets of the military-industrial criminals who profit from war is not only a rip-off scheme but also a recognition on the part of the rulers that military might is their best and perhaps only means to hold onto the loot they stole from the peoples of the U.S. and the world. And it is also why taking an anti-war and an anti-imperialist position is such a political threat to the rulers at this specific moment in history.

In April the Trump administration called on all agencies to expedite the process for increased arms sales abroad. So when Trump raises questions about NATO, we know he is hustling for the military industrial complex. When he calls on NATO countries to increase their military spending, the beneficiaries of that spending will be the shareholders of Boeing, Lockheed Martin, Raytheon, General Dynamics Corporation, United Technologies and Northrop Grumman. At the same time, his critique of NATO begs legitimate questions: Why does NATO still exist, and why are nations like Colombia being brought into its structure?

It is an absurd position for the left to bash the Trump administration for undermining the so-called Western alliance when he criticizes NATO. For oppressed people around the world, NATO is an instrument of Western capitalist dominance, a structure of European/U.S. colonial power that is an enemy of humanity. So the responsibility of the left is to build on Trump’s anti-NATO remarks – whatever his motivations – by offering a real critique of NATO.

When Trump meets with Kim Jong-Un, the anti-war and anti-imperialist position would be to support any de-escalation of tensions between the U.S. and North Korea. If it wasn’t for U.S. imperialism there would be no North and South Korea in the first place, so how can any self-respecting leftist not support at least the rhetoric of peaceful resolution, knowing full well that the U.S. is eventually going to have to be kicked out of Korea entirely?

The same thing goes with capitalist Russia. How can someone position themselves on the left and align with a fraction of the ruling class to agitate against Trump’s Russia policies? What do those policies have to do with the economic contradictions facing workers in the U.S., unless those policies lead to potential conflict that must be opposed?

The imperial left has entangled itself in all kinds of political and ideological contradictions. It finds itself in alignment with the neoliberal right because it desperately believes the neoliberal right that controls the state (don’t be confused – governments/administrations come and go, but the state endures until it is smashed) will somehow put the brakes on the more extreme right that is not even in power! The left’s embrace of bourgeois patriotism and support for liberal totalitarianism in the form of collusion between the state and big telecommunications firms to restrict and control speech and information provides a foundation for the legitimization and expansion of fascistic forms of rule.

Our analysis of the duopoly must be unsparing. Both parties are the enemies of the people. Both parties are committed to policies that deny human rights to the people of the U.S. but also the world. And both parties have never hesitated to support the use of military force to advance U.S. geostrategic interests.

When Trump demanded more spending by European governments on NATO, that demand was widely panned as an assault on the interests of working-class Europeans. Many correctly noted that more expenditures by European governments for NATO amounted to policies that would “plunder and loot their citizens through higher taxation to help pay for NATO’s exorbitant expenses.” But the Democrats join the Republicans in the wholesale plundering of the public with obscene levels of military expenditures, including the commitment of more than a trillion dollars to upgrade the U.S. nuclear arsenal over the next 10 years while claiming there are no resources for housing, universal child care, public transportation, services for elders and clean water for the working class.

Therefore, we must engage in unrelenting agitation against both parties while urgently developing independent non-state and non-electoral popular structures. While we do this, we must build an anti-war movement and embrace the position of the Black Alliance for Peace that says without equivocation: “not one drop of blood from the working class and poor to defend the interests of the capitalist oligarchy.”

Ajamu Baraka is the national organizer of the Black Alliance for Peace and was the 2016 candidate for vice president on the Green Party ticket. He is an editor and contributing columnist for the Black Agenda Report and contributing columnist for Counterpunch. His latest publications include contributions to “Jackson Rising: The Struggle for Economic Democracy and Self-Determination in Jackson, Mississippi”. He can be reached at: Ajamubaraka.com