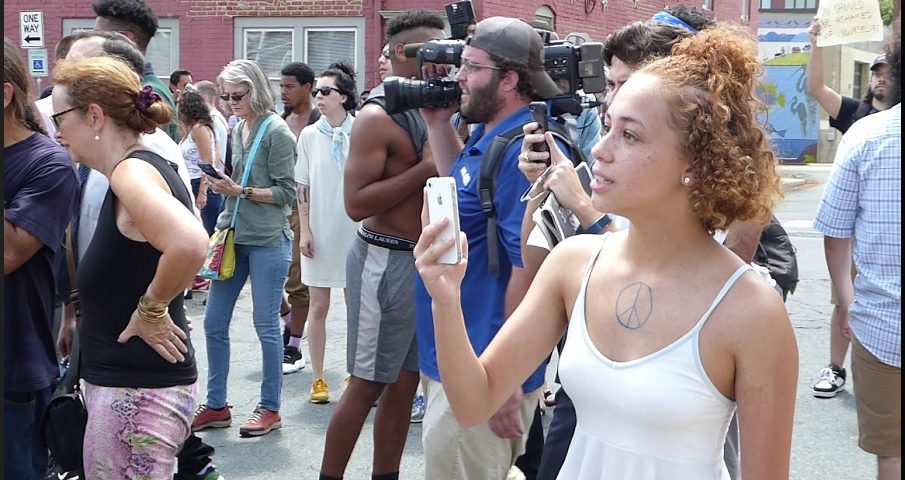 The Unite The Right Rally today, one year after the one in Charlottesville, can only be described as a complete flop. The racists were unable to fill a single train car and were dwarfed by police surrounding them and over ten thousand anti-racists, who gathered in various parts of Washington, DC. The Alt-Right racist movement has been exposed for what it is — an unpopular, shrinking fringe movement that the national consensus finds despicable.

This series of headlines quickly tells the story:

VOX: Unite the Right 2018 was a pathetic failure

After last year’s disaster in Charlottesville, very few white nationalists showed up to the follow-up rally in Washington, DC.

This was a pathetic show of irrelevance by white nationalists. Their “march” of two dozen people ended at Lafayette Park. Their “rally” ended before it was even scheduled to begin without a single speaker. Reportedly, fewer than two dozen white supremacists received a private train car (with more than enough seating for all) and were surrounded by a police escort so they were barely visible as they walked through the nation’s capital on Sunday. 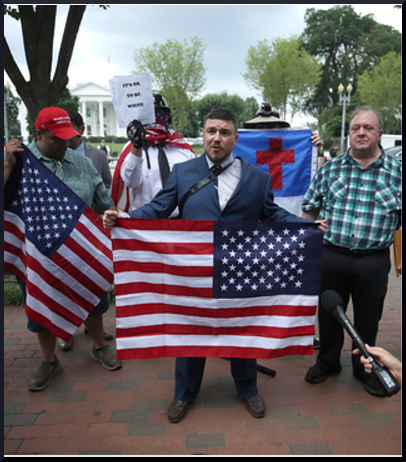 When they arrived at the park across the street from the White House, it was reported they “were escorted through a racists-only entrance.” Even though they arrived at Lafayette Park well before the time their rally was scheduled, there were already hundreds of counter-protesters waiting for them. The entire event was a victory for anti-racist organizers who showed the national consensus opposed their brand of Alt-Right modern racism.

While the white supremacist rally was a flop, some people were angry that the racists were given a private train car and police protection. Dan Ridge, a local government commissioner, told the Huffington Post the city shouldn’t provide neo-Nazis with private train cars, saying, “If we made them commute in integrated cars like we’ve been doing in D.C. for a long time, I think that’d scare them away.”

White racist leaders are fleeing in fear due to their unpopularity. Richard Spencer, the Alt-Right leader, moved away from Alexandria, VA due to constant protests against him, according to The Washingtonian. Spencer said last month that he would not attend the event. Christopher Cantwell, an anti-Semitic, Alt-Right shock jock and an unapologetic fascist, also said he would not be attending. Jason Kessler, the Alt-Right activist who organized the white supremacist “Unite the Right” rally in Charlottesville, Virginia, last year, looked like a lonely fool in Washington, DC at the “rally” he organized across from the White House. Even with Donald Trump in the White House, the Alt-Right racist movement has become a tiny fringe.

“several Charlottesville attendees had their identities revealed — which resulted not just in public shaming but in some attendees getting fired from their jobs. That’s why neo-Nazi Andrew Anglin warned people not go to Unite the Right 2, writing, ‘Getting doxed as a neo-Nazi street fighter will ruin your life, forever.’”

This all emphasizes how unpopular the Alt-Right movement and their peddling of racism has become.

Unicorn Riot wrote about leaked Facebook chats among the white racists that demonstrated the movement was seriously fractured after the Charlottesville protest one year ago. Their racism is so unpopular that, as the chats showed, the group is

“obsessed with somehow re-branding themselves as non-racist. Kessler and his cohorts also discussed inviting a token ‘non-white’ speaker with the hope that it would give them ‘political cover’ to bring on white supremacist speakers such as Duke.”

Unicorn Riot also reports that Kessler argued on the chats about how to “normalize” anti-Semitic views [Emphasis in original].

While the unstable racists fractured, people united against racism in Washington, DC. Black Lives Matter, anti-racists, racial justice advocates, union workers, peace advocates, anarchists, and anti-fascists, among others, joined together to demonstrate a massive opposition to racism. Their overwhelming nonviolent response showed the power of diverse people standing together in solidarity. 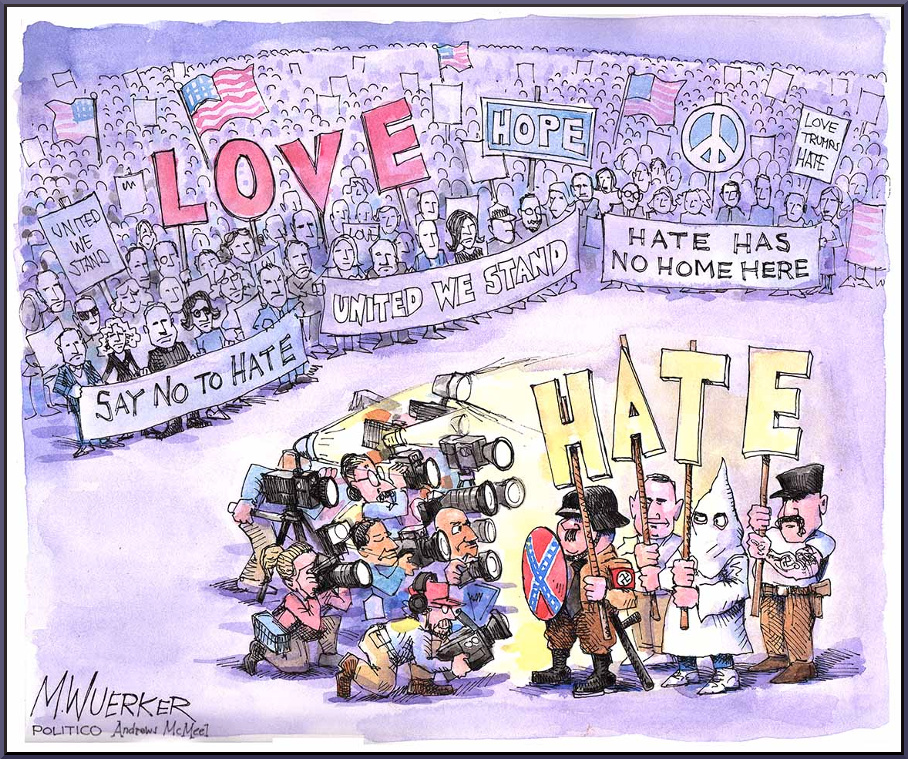 “In fact, counterprotesters outnumbered white nationalists by the hundreds at the DC rally — to the point that some counterprotesters left early because it was kind of boring. As I arrived at the counterprotests, one of the people leaving said that there ‘aren’t enough Nazis to troll.’ So she took her sign — a mock-up of a Confederate flag with ‘losers’ written along the flag’s stripes — home.”

The New York Times reported the protest served to “empower a leftist political coalition that vows to confront generations of racial and economic injustice.”

“In the end, the massive use of city resources was all so that Kessler and his crew could stand in the rain in front of the White House for about two hours. A little after 5 p.m., the racists quietly left the park, before the speaker lineup was scheduled to begin. Even if they had delivered their speeches, no one would have been able to hear or see them anyway.”

Of course, this does not mean an end to racism or white supremacist movements. It shows the Alt-Right movement, even in the Trump era, is an unpopular and divided fringe. Work continues to need to be done to suppress racism, a problem with deep roots of hundreds of years, as well as to confront the underlying economic insecurity that leads some poor whites to be jealous of people of color as well as to blame immigrants for their economic problems. We must end these divisions and focus on the real causes of economic insecurity, an unbearable wealth divide that leaves many behind and unsure of their future.

Below are some photos and tweets from the day:

#UnitetheRight2 finally shows up. Jason Kessler refuses to answer my question of why they’re celebrating the murder of #HeatherHyer. One protester arrested pic.twitter.com/RfK3ooGzqJ

Here’s a shot from afar of Kessler’s small group of neo-Nazis boarding trains in Virginia a bit ago. Note that this includes the press. (Pic from a member of the @OnePeoplesProj) pic.twitter.com/fRHQcC0X8B

Can’t stress enough how underwhelming the #UniteTheRight2 #unitetheright group is. Twenty MAGA dudes walking inside of 100s of cops, 100s of media, and 1000s of counter demonstrators down F street pic.twitter.com/BQZBpn9oME

#UniteTheRight2 is having a VERY hard time getting to Lafayette Square from Foggy Bottom with all the #ShutItDownDC counter-protesters boxing them in. There are hundreds of #UnitedAgainstHate supporters moving in from Freedom Plaza on the other side, too. #AllOutDC pic.twitter.com/7ZIwFgcYix

The hundreds gathered at Freedom Plaza are now marching to Lafayette Square, chanting “No Trump! No KKK! No fascist USA!”#ShutItDownDC #UniteTheRight2 pic.twitter.com/FaGbIG7Si7

Pathetic showing for #UniteTheRight2-White Supremacy is SO last year. pic.twitter.com/a5nPdM99hb

So far only 4 or 5 people have showed up for the #UniteTheRight2 rally (and are wearing masks) and they are being met by hundreds of counter-protesters from the other side of Lafayette Square, with many more on the way. #ShutItDownDC #UnitedAgainstHate pic.twitter.com/9gymcA6750

The main #BlackLivesMatter march is meeting up with the anti-fascists at the White House #UnitetheRight2 #ShutItDownDC #UTR2 pic.twitter.com/PGUpTj1fPp

This is what It looks like in every park and plaza within 20 blocks of the White House today in DC.#UniteTheRight2#AllOutDC pic.twitter.com/2xce9epd9B

Kevin Zeese is an American lawyer and political activist who has worked on a wide range of issues beginning with ending the war on drugs and mass incarceration, including helping to organize the 2011 Occupy encampment in Washington, DC at Freedom Plaza and supporting Chelsea Manning. He currently serves as co-director of Popular Resistance