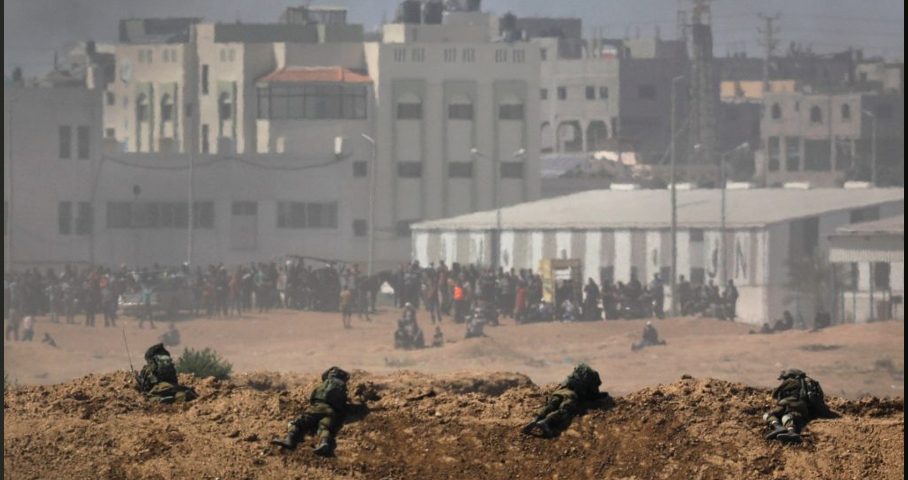 Gaza Strip – May 15 – Israeli Soldiers are shooting civilians in their legs. But they have killed many. Others are in critical condition. Hospitals are swamped with over 3,000 patients. Gaza Strip – May 15, Reuters

A BBC report published July 20, 2018 accepts the framing of killing of Palestinian civilians as a “defense of a borders.”  But Gaza is not a country, and so Israel cannot be protecting its borders.  Rather, Gaza is an enclave, an imprisoned neighborhood where its borders are controlled by Israel.  Israel decides who moves in and out of Gaza, which includes everyone from students and the sick, to foreign diplomats, to NGO workers. Israel controls what goods move in and out of Gaza.  All infrastructure and utility projects for water, electricity and gas etc., even if internationally funded are reliant on Israeli approval.

Gaza is an enclave inhabited by Palestinians, most of whom are refugees.  Gaza does not have sovereignty, rather it is under occupation. As such, while Western media outlets like to portray this as a war, it is not. Under International law and conventions the occupying power first has a responsibility to those citizens under its control, which Israel has neglected completely.  Second, under international law those under occupation have a right to resist through whatever means available to them.

The controlling narrative of the two-state framework of the post-Oslo period engenders a purposefully confusing political context for Palestinians.  While the Agreement on Gaza Strip and Jericho Area 1994 explains that there will be disengagement from Palestinian territories, it simultaneously outlines all the ways in which Israel will maintain control, and as such sovereignty over these territories.

Outside actors pretend as if Palestine is a state, and thus they use phrases such as Hamas, they “run Gaza” (quoted from the aforementioned BBC article).  Hamas does not run Gaza. It receives its salaries from the Palestinian Authority in Ramallah who withhold these salaries for their own purposes and for which there have been recent protests in the West Bank of Palestine.  Hamas has little control over the Gaza economy; they use the Israeli currency, the Shekel, and have no control over their own international trade.  Prior to the second-intifada many laborers, and still today many workers rely on laborers for work and to supplement their incomes. And Hamas certainly does not have control over Gazan borders, because there are no state borders in any legal, physical or economic sense. These are not borders militarily either.

So when Israel says that is it defending its borders, this language legitimizes its actions in the eyes of Western media outlets and governments.  It legitimizes a kind of warfare that makes sense to the European, American and Israeli viewers. The framing of borders suggests this is a war, and therefore Israel can claim that it is attacking military targets in the Gaza strip.  Israel can claim that it is defending its borders. These borders belong to Israel; it manages their daily activity, both militarily and through its civilian administration office, COGAT. It is Israel’s occupation and management of Gaza that has led its Palestinian inhabitants to march in protest.

The BBC article contains plenty of language that maintains this mistaken framing:

“Israel says it has only opened fire in self-defence, or on people trying to infiltrate its territory under the cover of the demonstrations.”

Israel cannot claim infiltration, because it occupies Gaza. Gazan citizens are under full control of the Israeli occupation and the Israeli administration of this occupation. It cannot claim self-defence. While Israel and Western media want to claim that Hamas controls the attacks from Gaza, Hamas is under occupation just like the rest of Palestinians who reside in Gaza.  Hamas members are not allowed to leave Gaza without Israeli permission and they do not have sovereign control over Gazan territory.

“If Hamas continues to fire rockets then Israel will respond in a much tougher way than they think.”

The BBC repeats a statement that could foretell the mass killing of a people who are denied the citizenship and rights of belonging to a state and yet are targeted and killed as if they did belong to a country at war with another.  Israeli language, which is accepted by media outlets maintains this limbo status, which allows it to continue its attack on Palestinians under the purposefully false pretense of defending borders. There are no borders in occupied territories.

Aida Winifred is an Early Career Research Fellow for the Independent Social Research Foundation and a Lecturer in Politics and International Relations at Queen Mary University of London.