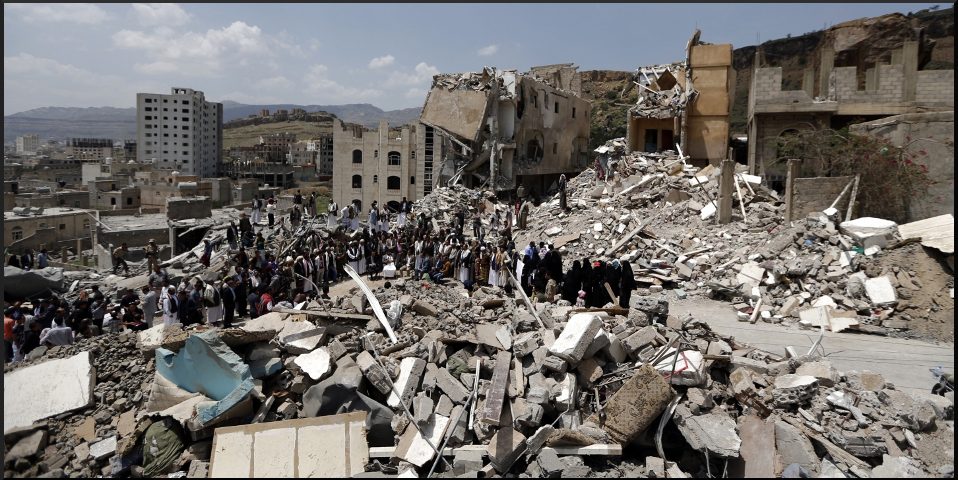 Far too few Americans seem to be asking an obvious question, why is the United States supporting the genocidal Saudi war upon Yemen?  Considering that Yemen’s humanitarian crisis now exceeds every other disaster in the world, this vital question deserves an informed and serious answer incorporating the geography and history that Americans learn neither from their schools nor their media.  With its ports blockaded and its trapped population relentlessly bombed, the Red Cross reports that more than eight million people face imminent starvation and over a million have contracted cholera.

But this produces no partisan divide. Both Obama and Trump are presidentially co-responsible, and in the US public’s ever-breathless obsession with its own self-absorbed identity politics, who notices? Presumptively “liberal” MSNBC hasn’t run a single story on Yemen since July 2017, over a year ago, while running 455 stories on Stormy Daniels. Our MSM has reduced itself to tabloid journalism.

So why indeed, let us finally ask after three years of mass killing and destruction, are we providing daily in-flight refueling by USAF air tankers of US-made Saudi aircraft dropping US-made bombs on starving people using targeting data provided by Americans?  Why has our administration approved sales to Saudi and UAE aggressors of 120,000 precision-guided munitions from Raytheon and Boeing within a pledged $110 billion arms transaction? Big money and big profits in this, a reliable cash cow for weapons producers with no end in sight. But since our Arms Export Control Act limits use of American weapons to “legitimate self-defense,” what massive invasions are these states anticipating?

More directly, do US taxpayers know that the USS Boxer positioned off the Yemen coast provides medical support to Yemen’s outside assailants, and that US troops are deployed on the ground for “intelligence and logistics” support, including assistance with “operational planning, maritime interdiction and security operations” in a murky proxy war against indigenous peoples as we did in Vietnam?

Despite token hand-wringing by the Obama and Trump administrations and Congress, and extraction of unenforced pledges by the Saudis to limit casualties, the carnage has continued unabated.  The US uses the 2001 Congressional Authorization for the Use of Military Force against groups responsible for the 9/11 attacks as a legal fig leaf to justify military actions against AQAP and ISIS as our ostensible targets in Yemen.  And the recent palace coup by Saudi Prince Mohammed bin Salman has gathered up ruling family wealth to pay the bills. Those bills include the costs of blanket cover-up PR on both sides of the Atlantic, which has been highly successful.

But returning to the central question, why? In the online magazine New Eastern Outlook, policy investigator and analyst Phil Butler writes, “While Washington think tank evangelists try and play the tensions off as Sunni-Shiite religious friction, new oil reserves are the truth of these matters.”

We need to follow the business news to monitor the energy sector that determines much of world politics.  Evidence from these sources indicates that Yemen sits above massive oil and gas reserves not yet fully explored or developed in addition to its four billion barrels of proven reserves. As far back as 2002, a US Geological Survey report identified very substantial oil and gas deposits in Yemen and beneath its territorial waters in the Red Sea and Gulf of Aden.  From a December 2008 Wikileaked State Department cable, we know the Obama administration and its Secretary of State Hillary Clinton were well aware of Yemen’s substantial resources.  It is no random choice that the US Navy seized Samhah Island in the Gulf of Aden and is building its largest regional naval base nearby.

OK, but Saudi Arabia has lots of oil. Why the ruthless attack on Yemen?

Remember the wildcat strikes in Texas and Oklahoma? Long gone. That’s when “peak oil” was first identified and its depletion curve graphically predicted. Saudi Arabia is rapidly bringing new rigs on line, increasing its total to 170 this year from 88 five years ago, including offshore rigs that are seven times more expensive to operate. This is a dead giveaway that the world’s biggest fields have finally peaked, as did our own in the 1970s. To survive with all their economic eggs in the oil basket and to successfully compete with Russia, Iran, and Venezuela, the Saudis need a basket reload from somewhere.

Yemeni economist Hasan al-Sanaeri reports that Riyadh also wants to build a canal across Yemen to the Arabian Sea to bypass the Hormuz Straight exiting the Persian Gulf and the Bab al-Mandab Straight into the Red Sea through which some 3½ million barrels of oil pass daily en route to Europe and North America through the Suez Canal. Both narrow straights are potential choke points in times of conflict.  The Saudis obviously want to avoid an Iran-allied government in Yemen that could give Iran potential control over both straights. It’s also no random choice that the US has established its largest African drone base in Djibouti, directly across the Bab al-Mandab from Yemen, and Israel recently announced its willingness to help defend the straight against Iranian “encroachment” if necessary.

So what is America’s vital interest? Couldn’t we buy oil just as easily from Yemen? Of course, but it’s not just the oil. It’s protection of the petrodollar, which is progressively yielding to alternative currencies. World Bank/IMF/WTO economic dominance is threatened by China’s 86-member Asian Infrastructure Investment Bank, the Shanghai Cooperation Organization and China’s One Belt-One Road project – in tight, interwoven collaboration with Russia – across the Eurasian land mass identified as the queen on Brzezinski’s Grand Chessboard.

The 1973 Saudi and larger 1975 OPEC agreements to denominate oil sales in dollars have kept the dollar atop the global financial system and provided the Saudi cartel a power base that was inevitably time-limited. Two of its three largest oil producers, Iran and Venezuela, have broken away from OPEC restraints and – joining Russia as major producers outside the US sphere of influence – are trading in alternative currencies. These two escapees from our corral are now designated “enemy” nations branded with our usual propaganda barrage as “undemocratic” and/or “a sponsor of terrorism.” Their only offense in fact is aspiring independence from the North Atlantic imperium. To challenge our hegemony further, Yemen nationalized its hydrocarbon resources in 2005, expropriating oil assets from Hunt Oil and Exxon Mobil affiliates.

Hunt Oil Company, once described as “one of the big money Texas donors behind the Bush family political empire,” discovered oil in Yemen in 1984 and opened a refinery there inaugurated by then Vice President and former CIA Director George H. W. Bush in April 1986.  Al-Sanaeri reveals that Saudi Arabia and the US signed a secret agreement at that time, after world oil prices had plummeted in the early 1980s, to prevent Yemen from independently developing its own oil and gas reserves. This was and remains intended to stabilize prices and to keep Yemen’s resources and their marketing under US control through its Saudi partner. As declining reserves deplete the remainder of the Arabian peninsula, and North America’s shale and tar sands oil and gas deposits are too expensive to extract and refine competitively without US control of global production and pricing, today’s prize is the world’s last major undeveloped oil bonanza, estimated by one source as possibly a third of current world reserves.

So the answer to our question is discomforting to face. We are not peripheral in the crimes. Our fragile symbiosis underpinning the dollar is now seriously threatened, and our resource-extractive, dollar-dependent neoliberal empire needs to keep the Saudis in business at any cost to vulnerable peoples kept out of our sight by colluding media. And this answer begs other questions about our bipartisan crimes against humanity.  These are questions the tabloid-saturated US public shows little willingness to ask, but until we do we will remain less citizens of a functioning democracy than passive, easily manipulated subjects of a predatory empire.

Jack Dresser, Ph.D. is National vice-chair, Veterans for Peace working group on Palestine and the Middle East and Co-Director of Al-Nakba Awareness Project in Eugene, Oregon