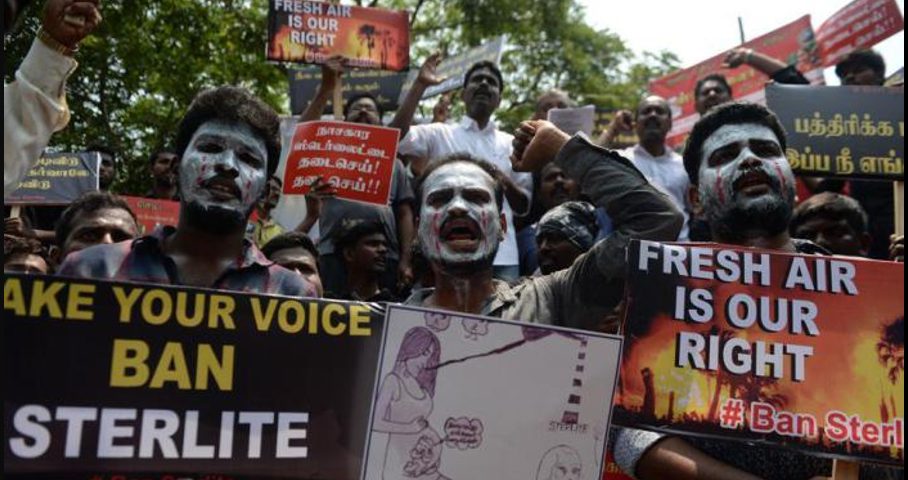 On May 22, thousands of protesters in the town and district of Thoothukudi (also known by its British name, Tuticorin), in the Indian state of Tamil Nadu, expressed anguish as victims of pollution from the area’s copper smelter. Police and paramilitary fired into the crowd, killing 13 and injuring many more. What happened on May 22 was a piece of a larger story; neither the pollution nor the protests were new.

People in Tuticorin are resisting because of a copper plant operated by an Indian unit (called Sterilite) of Vendanta, a mining company based in London. The unit is the seventh-largest smelter in the world and is unique for being located in such a densely populated area. The area is also located near the ecologically sensitive Gulf of Mannar. Protesters say the plant is hazardous to the environment as well as to the health and safety of local people.

The plant has a long history of scandals regarding pollution and safety. In 1996, the National Trust for Clean Environment, a Chennai-based group, challenged the court ruling allowing the factory to begin operation. In 1998, two years after the plant opened, the Madras High Court gave an interim order to close the plant. Production stopped for one month. However, after agreeing to curb pollution the plant charges were dropped. In 2010, the Madras High Court again ordered the plant to be shut down due to high levels of pollution. The case went to the Supreme Court, where in 2013 it was decided that the company only needed to pay Rs. 100 crore [about $16 million] in penalties, and that operations at the plant could continue.

Specific abuses cited by the High Court (and more importantly, by protesters) include fluoride, cadmium, chrome, lead, arsenic and copper seeping into groundwater—which is used for drinking, for growing food and providing fish that people eat and sell. This has been confirmed by groundwater samples taken in 2005. Just as dangerous is the air pollution: sulphur dioxide and particulate matter.

Residents call the town the “pollution capital” for the noxious fumes from the chemical industries. Villagers have complained of throat irritation, breathing difficulties, and abnormal pain during menstruation for women. They allege that the plant is the direct cause of breathing disorders (especially asthma), skin diseases, heart problems, and cancer.

According to a study by Chennai Solidarity Group, an environmental non-profit organization, 13.9% of the people within a 5 kilometer radius of the plant (covering more than 80,000 people in total) have respiratory diseases. The study also reported higher ENT (ear, nose and throat related disease) morbidity (16.6%) than in control areas or the state of Tamil Nadu as a whole. The plant also has the potential to be a source of phosphate pollution, which could cause ecologically harmful eutrophication in water bodies.

In March 2013, people of Tuticorin awoke to irritated eyes, burning throats, and breathing troubles after a toxic sulfur-dioxide gas leak. The Tamil Nadu Pollution Control Board cited sulfur-dioxide levels of more than double the prescribed limit in a closure order. The plant denied the accusations and the closure never went into effect. Some protesters also point out that the plant is located 14 kilometers away from the Gulf of Mannar, despite a condition that the plant has to be at least 25 kilometers away from the Gulf.

For the past 22 years there has been an ongoing pattern between the people of the surrounding area and the Sterilite plant: the company decides to expand, the people revamp protests, and the plant temporarily shuts down due to “environmental violations” as determined by the government and the court system. The plant has shut down a total of five times prior to recent incidents in May of 2018.

Despite the heavy costs of the resistance, the movement has achieved quite a lot in halting expansion of the plant—as when the company attempted to build a discharge pipe through a residential area and emptying into the ocean. The movement is very diverse and has exhibited the immense potential of solidarity among oppressed peoples within third world communities. The Anti-Sterilite protests have involved fisherman, mothers, children, NGOs, politicians (particularly in the Communist Party of India), religious groups, organized labor, and even celebrities.

Beginning in February of this year, 500 people declared a hunger strike and indefinite protests against an announcement from Sterilite that the plant would expand and production would increase by 50%. On Feb. 12, the first day of the protests, 270 people were arrested.

Protests swelled on the hundredth day, May 22—but police opened fire on the nearly 20,000 protesters, killing 13. The exact number injured on that day is unknown—although certainly over 100. Video later showed a police officer saying, “at least one should die.” As video and commentary flooded social media, authorities blocked the internet in the area. A close study of some of the visuals and the claims of relatives of the dead showed police firing was mostly from powerful weapons at close range.

The next day, May 23, protests broke out in London over the massacre. The angry protesters demanded that Vedanta be delisted from the London Stock Exchange and that an inquiry be made into the environmental and human rights violations. There was also a strong sense of solidarity with those who were recently massacred in Gaza.

It has since been announced that the Sterilite Copper Smelter would halt expansion. There has been no action on the movement’s demand to permanently shut down the facility.

[1] The case was impleaded by members of the Communist Party of India (Marxist). http://www.foilvedanta.org/news/the-anti-sterlite-movement-saga-of-a-struggle/

[2] Ground water samples taken from the area showed high levels of cadmium, floride, chrome, lead, and arsenic in 2005. It comes as no surprise that fishermen have been some of the most active participants in the agitations, given that effluent discharges affect breeding spots for fish and thus jeapordize their livelihoods.