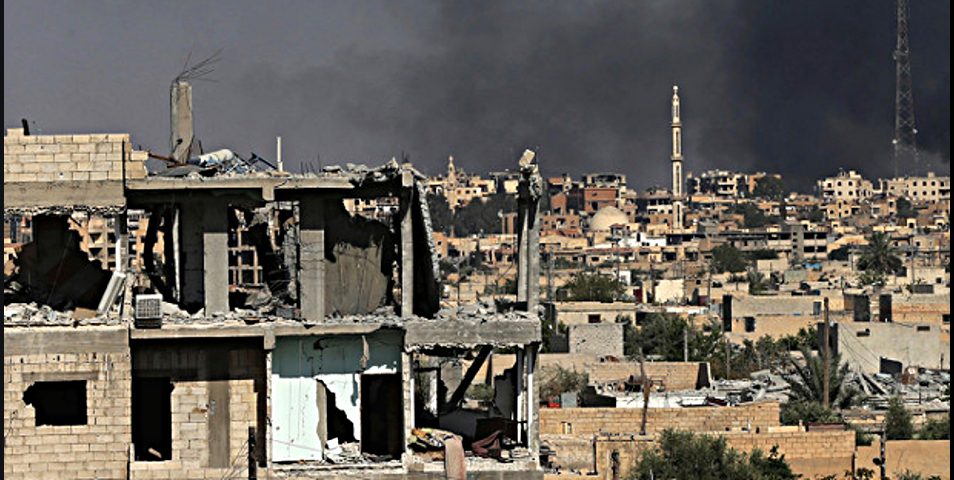 by Niles Neimuth, originally published on the World Socialist Website

The United States committed war crimes of staggering proportions last year during its four-month-long siege of the Syrian city of Raqqa, demolishing up to 80 percent of the city with an unrelenting blitzkrieg of bombs and artillery shells that killed hundreds of civilians.

The devastation left behind by the US military and its proxy troops in the so-called Syrian Democratic Forces was detailed in a damning report published this week by Amnesty International grimly titled “War of Annihilation.” Defense Secretary James “Mad Dog” Mattis routinely used the phrase when describing the effort to take control of the city from the Islamic State of Iraq and Syria (ISIS). The US dropped thousands of bombs on Raqqa and shelled the city with 30,000 artillery rounds in just five months. The population of Raqqa and its surrounding villages have been reduced from a pre-war total of 340,000 to less than 100,000. Most of those who fled the city are unable to return as most homes and critical infrastructure have been damaged or destroyed. Those who have returned face the prospect of being blown apart by unexploded bombs and missiles dropped by the US and its allies or land mines set by ISIS.

While the US has been officially waging war in Syria to defeat ISIS, the report notes that artillery and airstrikes continued to pound civilian areas even as a deal was struck which allowed thousands of the group’s members to evacuate the city. With at least 2,000 US troops currently illegally occupying Syria, Washington’s ultimate aim is to overthrow the government of Bashar al-Assad and install a regime which is more pliant to the needs of American imperialism.

Amnesty’s researchers interviewed more than 100 survivors and surveyed the sites of 42 US airstrikes across the city, providing a sense of the death and destruction wrought by last year’s onslaught. The human rights group spoke to the Badrans, a family that lost 39 of its members, most of them women and children, to four separate US air strikes as they scrambled to find shelter.

The commander in charge of the assault boasted at its height that the attack on Raqqa was “the most precise air campaign in history.” The Pentagon has absurdly claimed that it killed fewer than 500 civilians in 2017 in all its various military operations across the globe, admitting to just 32 civilian deaths in Raqqa.

A report by the Associated Press in April found that close to 500 corpses had been pulled from the rubble and that hundreds of bodies were still being uncovered many months after the siege had ended.  Airwars, which closely tracks airstrikes by the US and its allies in Syria and Iraq, has documented 1,400 civilian casualties resulting from US airstrikes in Raqqa.

Unlike the hysteria generated over the fake gas attack in Douma earlier this year, the revelations of widespread war crimes carried out by the US and its allies in Raqqa, as with the assault itself, have been treated as a non-event by the corporate media. Neither the New York Times nor the Washington Post, the political establishment’s two main newspapers of record, carried any mention of the Amnesty report in their print editions.

Times columnists Nicholas Kristof and Thomas Friedman, who both jump at any opportunity to denounce with the utmost moral outrage alleged atrocities carried out by the Assad regime or Russian forces in order to clamor for an escalation of US “humanitarian” intervention, apparently caught a joint case of writer’s block.

The editorialists and commentators in the American media, by and large, argue that Trump has not gone far enough in Syria, and that the US wars and occupations which have been raging for more than 15 years must be expanded to counter any challenge by Russia and Iran to US domination over the Middle East.

Amid the never-ending mudslinging over Trump’s supposed collusion with the Russians to win the 2016 election, all sides agree that the wars for complete control over the region’s oil reserves must continue and in fact be expanded, regardless of the cost in civilian lives.

The media’s failure to report on the atrocities in Raqqa and its coverup of Amnesty’s findings make them complicit in these crimes. They have made a deliberate decision to conceal from the American people the scope of the crimes carried out in their name in an effort to block the development of broad antiwar sentiments into a politically conscious movement against imperialist war.

A critical role in this effort is played by the pseudo-left, including organizations calling themselves “socialist” who work tirelessly to justify imperialist intervention. The International Socialist Organization has routinely attacked those who oppose the US war in Syria and Washington’s so-called “rebel” proxy forces. They have responded to the repeated illegal missile strikes by President Trump on the Assad government, which could have sparked a war with nuclear-armed Russia, by charging that they did not go far enough, while complaining that both Obama and Trump have failed to do enough to arm the Al Qaeda-linked “rebels” unleashed upon Syria.

Similarly, the Pabloite International Viewpoint published a statement this week calling for a renewal of the war for regime change in Syria, claiming that the US and its imperialist allies have “refused to allow the democratic components of the uprising to defend themselves…,” meaning that the US has not bombed Syria enough or delivered a sufficient amount of weaponry to their proxy forces.

The ever-compliant media has worked with the Pentagon to falsely portray its wars as bloodless surgical operations in which terrorists are being killed with precision bombs, while in fact the bodies of the innocents continue to pile up. The US effort to retake Mosul in Iraq from ISIS in 2016 and 2017 killed as many as 40,000 civilians, according to an estimate by Iraqi Kurdish intelligence, while more than a million people were displaced. The three-year-old Saudi-led war in Yemen, backed by US special forces on the ground, has killed over 13,000 civilians and threatens more than 18 million with starvation.

And now the Trump administration is considering more directly joining the Yemen war, while preparing for a far more dangerous military confrontation with Iran, placing millions more civilians in the crosshairs.