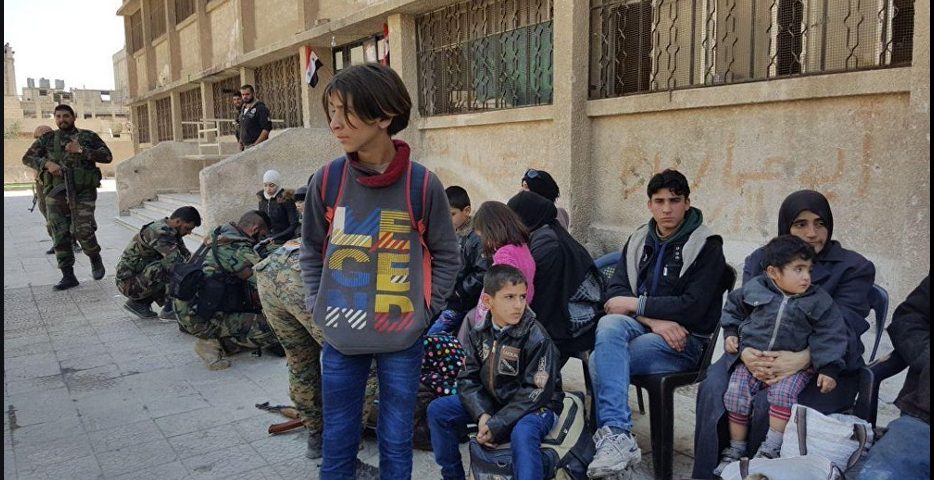 Syrian soldiers assist civilians waiting to be evacuated through a humanitarian corridor in East Ghouta.

This letter was written a couple of months ago.  Before the letter was circulated for endorsers, no less presented to the members of the United Nations Security Council, the United States vetoed a resolution to condemn them for raining cruise missiles on Syria.  The OPCW report emerged with little evidence of a chemical weapons attack, but it was enough for the US and its allies to condemn the Syrian government.

It might seem that this incident is old news.  However, nothing reported here has changed significantly except in Ghouta, where hundreds of thousands of civilians have been released from the dominion of a violent and inconsistent governance, and tens of thousands have returned home to begin the arduous task of rebuilding.

The UN Security council, consumed by partisan bickering and unable to find a clear response to the dramatic fabrications or the brutal realities perpetrated by  powerful states against the rest, has become a parody of the international law it was created to uphold.

For 7 long years, the people of Syria have suffered terrorism and vicious attacks by local and foreign forces paid by foreign governments to overthrow the their legitimate government of Syria. Not only are the President and the members of Parliament in Syria elected, but they are supported by a large and competent state bureaucracy similar those of the developed nations. The Syrian government and the Syrian army are populated by representatives of all the facets of the multi-ethnic, religiously diverse Syrian society.

For the last 5 years, militant factions within that region have regularly shelled civilian areas of the city of Damascus, over 1500 innocents and wounding many more. Most of the population of East Ghouta have been living as refugees, while the militant factions governing the area have built an incredible network of underground tunnels wherein they held thousands of prisoners, and stored food and medicine out of the reach of the civilian population. On April 7th, after weeks of fighting, the Syrian government was on the verge of gaining full control the East Ghouta region which borders on Damascus. The battle was preceded by months of negotiation.. For weeks, the Syrian government and their allies had been engaged in provisioning and evacuating civilians from the area to safe communities and to the care of their families and friends. Fighters who did not wish to die fighting were also evacuated on secure buses to the province of Idlib on the Turkish border.

On April 7, near the end of the battle, in the midst of this massive civilian evacuation, an organization affiliated with the militant forces losing control of East Ghouta accused the Syrian government as represented by the Syrian army of precipitating a limited chemical weapons attack on a civilian residence there. The evidence they provided has been questioned, not only by the Syrian government and their allies, but by independent observers from around the world. After 2 meetings and several hours of discussion, the members of the Security Council did not find unity in supporting the OPCW mission to investigate these events in East Ghouta. Instead, the United States and their western allies, all members of the council, used the incident to justify an massive missile attack on Syria. Meanwhile, the OPCW team were delayed, and had finally traveled to Syria without a Security Council Mandate.

These events rob the Syrian people of their fair hearing. They not only reflect an egregious disrespect for the integrity of the Syrian state, but they undermine the integrity of the United Nations as a serious deliberative body. It is not acceptable that non-state militias who attack civilians treated as co-equals with the representatives of a sovereign state under attack? It is a clear breach of International Law for foreign agents to pay and provision ground forces to attack a sovereign people and a sovereign state for the purpose of gaining control of that country.

The attack on Syria is not an isolated event. The entire region known as the Middle East has been shorn of international respect and credibility by the United Nations while suffering egregious attacks by those who would control the wealth of these nations.

While the Security Council focuses on the dispute around finding out what occurred in East Ghouta on April 7, and where the responsibility lies, other atrocities in the region go unnoticed. Since the last week of March, Israeli snipers have openly and unapologetically killed dozens of unarmed Palestinian protesters and wounded more than 1500 men women and children upholding their grievances on their allotted territory inside the Israeli built fence around Gaza. These people are crying out for justice but the nations of the world do not respond.

Massive attacks by the Saudi Arabian air force, supported their western allies, members in good standing of the Security Council, have bombed the country of Yemen to the stone age (literally) in the process murdering tens of thousands of civilians and leaving millions at risk of death by starvation and disease. The Council took the trouble to condemn one of the local Yemeni actors on the ground. United Nations relief organizations are subject to direction by the United States, and active supporter of the Saudi invasion.

It is time for to begin an return to fairness and equity and stability in the United Nations. Syria, unlike the people of Palestine and Yemen, has a credentialed and credible representative within the United Nations. Their allies, Russia and Iran, are also represented in the UN, and within the Security Council, all of whom are entitled to the respect of their peers. Previous meetings on the subject of the recent events in Eastern Ghouta have been undermined by personal attacks by some SC members against others. This is unacceptable in the body responsible for global security.

The OPCW has made their visit to at least one of the sites in Douma where the events of April 7 are placed. Already we question their decision not to visit other relevant sites in the course of inspection. With all the biased and disorganizing side issues, it is necessary that the OPCW report receive an open and transparent hearing in the Security Council. There should be no question unanswered when any further decision is made. it is time for the United Nations to treat all members as equals and accept that diverse interests and ongoing disagreements cannot be resolved by a simple vote among unequal members.

The United Nations is, at base, a consensus based organization. Discussion should lead to a level of consensus, not stop at an arbitrary line drawn by those who do not have the patience or the will to complete the process of decision making. A more or less evenly divided vote centered on information that has not be fully understood and accepted by all parties does not reflect consensus and will not support international justice, peace, and security. In that light we insist and demand that the OPCW report from East Ghouta receive a full, transparent and open hearing withing the Security Council; that the members of said council set aside biases and alliances and self interest to make a decision that will support peace and security for the Syrian people.