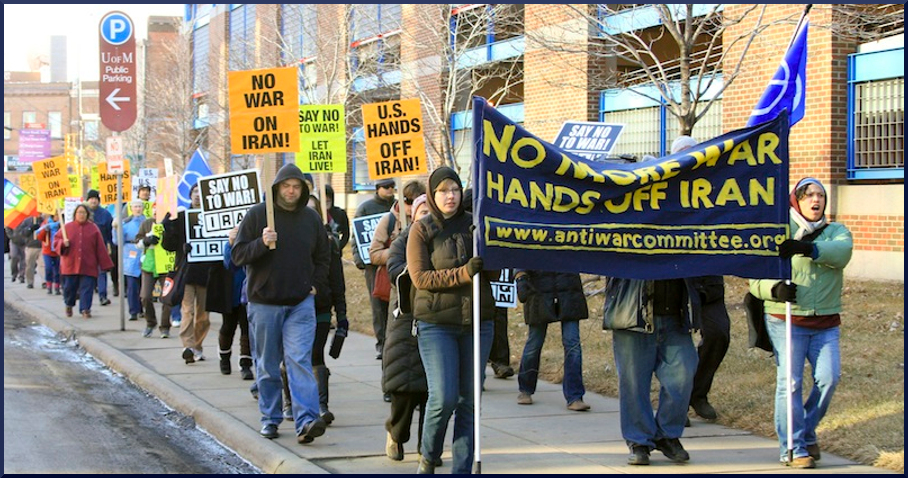 by Deirdre Griswold posted on Workers World, May 10

The Trump administration’s decision to pull out of the nuclear agreement with Iran is yet another demonstration of the no-holds-barred ambition and arrogance of this imperialist ruling group.

The U.S. capitalist media admit that Trump’s move has antagonized Washington’s allies/rivals in Europe. Yet the big-business media, whether friendly to Trump or fearful of the consequences of his acts, continue to obscure the real issues. Instead, they stereotype Iran in a way that has so often been used to soften up public opinion to accept U.S. aggression.

For example, the media say that this is all about Iran’s nuclear program, even while admitting that Trump is illegally pulling out of an agreement under which Iran has completely and verifiably given up any attempt to build nuclear weapons.

But how often do the media here express alarm about Israel’s nuclear weapons — not just a program that might be used to build a few, but a stockpile of actual warheads? It’s an open secret that Israel has been amassing nukes since 1966. The article “Israeli Nuclear Weapons, 2014” in the eminent Bulletin of the Atomic Scientists estimated that by 2014 Israel’s arsenal contained 80 nuclear warheads, making it the third-largest nuclear power in the world.

Iran is threatened all the time by Israel, which functions as a sub-imperialist ally of the U.S. in the region, coordinating militarily with the U.S. against the other nearby countries while ferociously repressing the Palestinian people, whose land it has stolen.

Or for that matter, when do the media ever criticize the U.S. military-industrial establishment for keeping an inventory of nearly 7,000 nuclear warheads, while at the same time demanding that other countries “denuclearize”? As of 2017, the Pentagon reported having some 1,411 warheads actually deployed on 673 ICBMs, SLBMs, and strategic bombers around the world.

The capitalist media also inflame religious passions in their attacks on Iran’s political leaders, most of whom are Muslim clerics. But what about the rulers of Saudi Arabia, who are on the best of terms with the White House? Their religious rule is much harsher than that practiced in Iran. For example, they carried out 48 beheadings in the first four months of this year. (The Guardian, April 26) The Saudi rulers are notorious for denying women the most basic rights. And while women make up more than half of Iran’s college students, women in Saudi Arabia are cloistered and only this coming June will for the first time be allowed to drive.

But all that is minimized by the capitalist media here, because the Saudi rulers are cronies of the U.S. oligarchy, even as they carry out a genocidal war against the people of Yemen with weapons, intelligence and logistical support provided by the U.S.

The fact is, Iran having had a nuclear program and having political leaders from the clergy are not the real reasons that the Trump administration has pulled out of the nuclear agreement and is now threatening Iran with economic sanctions and even possible military action.

The real reason is not even mentioned by Trump or the U.S. media, although it is so obvious. Oil.

That is why the U.S. billionaire ruling class has been hostile to any popular government in Iran ever since 1951. That year the people of Iran democratically elected a secular government, headed by Prime Minister Mohammed Mossadegh, that nationalized Iran’s oil, liberating their most valuable resource from the grip of the Ango-American Oil Co.

Two years later, in 1953, Mossadegh was overthrown by a CIA armed coup. Washington then put the torture regime of Shah Reza Pahlevi in power, who of course did what was expected of him and welcomed back the U.S. oil companies. The CIA’s point man for the coup, who actually rode on a tank into Tehran, was Kermit Roosevelt Jr. He later became an executive of Gulf Oil Co.

Everything was then cozy between Iran and Washington as U.S. oil companies raked in the profits — until the Iranian Revolution of 1979 overthrew the hated Shah. Out of that revolution, started by students, came the present Islamic Republic, which renationalized Iran’s oil. Today’s independent and sovereign Iran threatens Big Oil’s domination of the entire energy-rich region.

Trump wants to be the Kermit Roosevelt of today and once again grind down Iran under the tyranny of Big Oil. He has assembled a cabinet that includes extreme war hawks John Bolton and Mike Pompeo. He’s appointed a notorious torturer of Muslims, Gina Haspel, to head the CIA.

There are many reasons for anti-imperialists to get out into the streets and oppose the aggressive, reactionary foreign policy agenda of the Trump administration. To defend the sovereignty of Syria. Venezuela. Korea. Afghanistan. Libya. Yemen. Honduras.

Iran must now be added to the top of the list.