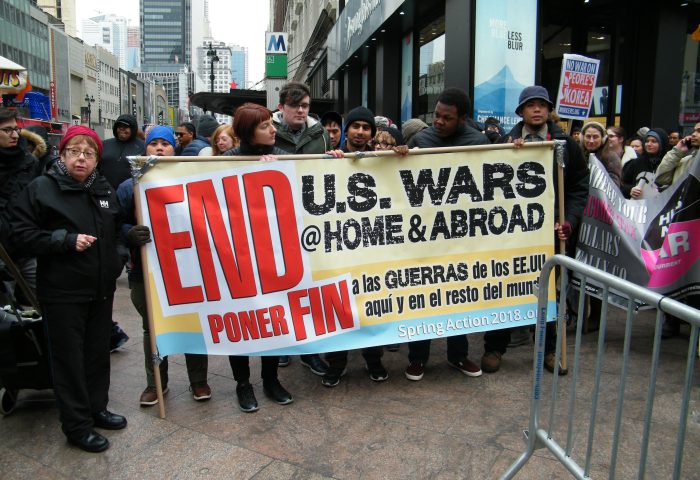 Antiwar and social justice activists mobilized for the April 14 and 15 spring regional protests across the U.S. to demand an end to “U.S. Wars at Home and Abroad.” The broadly sponsored and nationally coordinated protests were organized in some 40 cities, in an effort initiated by the United National Antiwar Coalition (UNAC) and the Coalition Against U.S. Foreign Military Bases.

Although hundreds of organizations joined in endorsing these actions, most were extremely modest in size. Estimates of the crowd in Oakland, Calif., ranged from 750 to 1000, while over 500 assembled in New York. A related Chicago protest a week later drew some 300 people and was organized by a new coalition that affiliated to UNAC. Planned actions in Minneapolis were limited to less than 100 due to a blizzard snowstorm. About 100 mobilized in Washington, D.C.

Despite the modest size, many new and young activists took part and played key roles in organizing the demonstrations in several areas. Many who have lived their entire adult lives with U.S. wars, which have tragically become normalized in the U.S. to a significant extent, were impressively enthusiastic about the actions and state that they are looking forward to building a strong antiwar movement in the future.

The April actions were a test of the capacity of antiwar forces to return to the streets in significant numbers to challenge U.S. imperialism’s ongoing wars in seven countries, as well as the deepening attacks on working people at home. Official demands included opposition to racism in all of its manifestations, Islamophobia, sexual and gender oppression, and global warming-induced environmental destruction.

Speakers at the main coastal rallies scored U.S. military intervention on every continent while denouncing the government’s ongoing attacks on trade unions, social services, and trillion-dollar “gifts” and tax breaks to the corporate elite. A central Spring Action 2018 demand was to “End All U.S. Aid to Apartheid Israel.”

The spring mobilizations were undertaken in the hope that the ever-escalating U.S. interventions and threats of war abroad—from the Middle East to North Korea, Venezuela, and Iran—coupled with the deepening attacks on workers and the oppressed at home, would provide at least an initial opportunity to return a largely dormant antiwar movement in recent years to the streets. This was sadly not to be the case.

“We were fully justified in planning and preparing to mobilize in the street the mass sentiment that exists against U.S. wars at home and abroad. We had a moral and political obligation to do so. But we were not able to bridge the gap, at least at this juncture, between this mass antiwar and anti-government sentiment that exists today and the willingness of the same forces to take to the streets in large numbers in independent actions.”

Lombardo noted that the April actions took place in the immediate context of the U.S. bombing of Syria and the Israeli murder of close to 40 unarmed Palestinians protesters at the Gaza border and the injuring or wounding of another 4000. He offered a series of explanations for this still modest capacity of antiwar and social justice forces to mobilize. These included the concerted efforts of the Democratic Party and associated corporate media to channel social discontent into the upcoming 2018 and 2020 elections with the objective of defeating Republican Donald Trump and returning the Democrats to majority status in the House and Senate.

He added that today’s wars—drone wars, special operations wars, covert and proxy wars, privatized mercenary army wars, sanctions and embargo wars—are largely kept from public view. “People don’t see body bags coming home” be noted. Lombardo also pointed to the unfortunately still-divided U.S. antiwar movement, but noted that this was a minor factor and that the April actions had the broadest backing in recent years, with some 500 organizations on board in support of the mobilization’s key demands.

I would add that another factor explaining the very modest turnout is the virtual absence of the organized labor movement. Incapable of defending its own interests, not to mention the interest of workers under attack by imperialism in other countries, the terribly bureaucratized, pro-capitalist and often corrupt labor fakers contributed nothing to this worthy national effort, that included a major focus on defending working people in every aspect of social life.

With regard to the Oakland April 15 mobilization, for example, the Central Labor Council of Alameda County, while approving a last-minute resolution supporting the basic April 15 demands, consciously excluded the key demand to end U.S. aid to Israel. At best their token resolution brought a mere handful to the Oakland protest. The labor council’s virtually exclusive effort of late has been to mobilize, finance and elect warmongering Democrats to office.

Tied hand and foot to the Democratic Party, the historic graveyard of social movements, the entrenched bureaucracy has proven incapable of defending its ranks from yet another bipartisan frontal attack in the form of the expected decision of the U.S. Supreme Court in the Janus case, which would prohibit unions from collecting agency fees and/or union dues via the check-off system.

UNAC’s efforts, however modest the result, were an important contribution in winning new and organized but previously disparate forces together to fight for principled demands in united-front-type mobilizations. They will serve the movement well in the future, and indeed, as a model in antiwar and social justice organizing.

Socialist Action played an important role in building the Spring Action 2018 actions. It was well represented in the various planning and preparation meetings and on the speakers’ platforms. Youth for Socialist Action at the University of Connecticut chartered a bus that brought about 25 young people to the New York City protest on April 15.

In the San Francisco Bay Area prior to the Oakland rally, radio station KPFA broadcast a one-hour teach-in featuring a diverse assemblage of social and political activists.  See: https://kpfa.org/player/?audio=283293 and other protest coverage at:  https://www.springaction2018.org/report-on-demonstrations.html

Jeff Mackler  is the national secretary of Socialist Action, a Trotskyist political party.[1] He was the nominee of Socialist Action for United States Senate in 2006 and President of the United States in the 2016 election. Mackler founded Northern California Climate Mobilization, is a longtime teacher and union activist with the American Federation of Teachers in Hayward, California and is director of the Mobilization to Free Mumia Abu-Jamal.