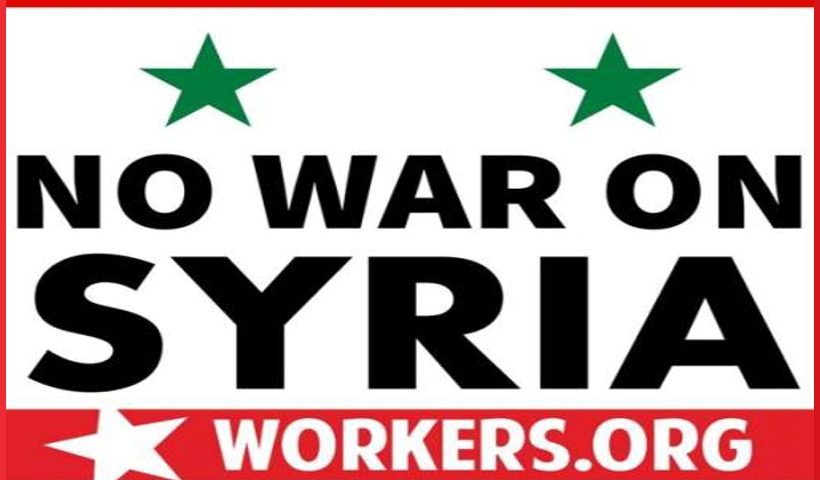 U.S. wars are based on lies and staged provocations. This is hardly news.

Now comes the charge that on April 7 someone — the imperialists are saying it was the Syrian government, although there is no proof of that — killed dozens of Syrians with a poison gas attack on the town of Douma, which had only recently been liberated from anti-government forces.

The brutal seven-year war against Syria had been winding down after the failure of every effort by U.S. imperialism to overturn the Syrian government.

The last groups of reactionary, Saudi-backed military units were defeated this month. They had relentlessly shelled the civilian population of Damascus, the Syrian capital, for years. Thousands of these fighters have finally surrendered and were forced out of the hills of East Ghouta province overlooking Damascus. They are due to be bused out of the area to Idlib, a rebel-held area in the far north of Syria.

The Syrian government has also established humanitarian corridors enabling more than 150,000 civilians to be evacuated by its forces.

The town of Douma, where the supposed gas attack took place, was the last to be liberated. The Army of Islam or Jaysh al-Islam had agreed to an evacuation.  The Syrian Arab Air Force had destroyed more than 300 positions of Jaysh al-Islam in the Douma district, including its main headquarters, communication networks and ammunition depots, over the last 24 hours before the supposed gas attack.

Syria has no motive

The idea that the Syrian government would choose this moment of victory to suddenly unleash a gas attack is incredible and ridiculous. But it is a charge that serves as an excuse for the U.S. and NATO to renew their bombing, especially since only a week earlier Trump had talked about getting the U.S. out of Syria.

The gas attack, which is said to have killed at least 42 people, was top-of-the-news, front-page coverage in the U.S. media along with Trump’s tweets. While the charge that Syria did it was met with contempt and ridicule throughout most of the world, NATO members France and Britain dutifully chimed in with immediate threats to bomb Syria.

The Israeli regime beat them to it and immediately seized the opportunity to attack Syria. Two Israeli F-15 fighters fired missiles into Syria’s Tiyas Military Airbase in Homs province before dawn on April 9.

It is beyond belief to accept that Israel — whose troops have killed 28 unarmed Palestinian civilians and injured more than 1,500 over the past two weeks, in addition to the thousands it has killed in its past bombings of Gaza — was attacking Syria over the deaths of civilians.

Charges with no proof

The imperialists’ blatant assertion of Syrian guilt is not only totally unfounded, it is unprovable and totally implausible.

Syria has repeatedly denied allegations of chemical weapons use, underscoring that it has no weapons of mass destruction. This was confirmed by the Organisation for the Prohibition of Chemical Weapons.

The Syrian Foreign Ministry points out that similar allegations emerge every time the Syrian Army makes advances in its fight against terrorist groups.

Last year on April 7, the Pentagon, without waiting for any evidence, attacked Syria’s Shuaryat Air Force base with 59 Tomahawk cruise missiles, supposedly in response to chemical weapons being used at Khan Shikhoun, a town in southwestern Syria. The sudden attack, orchestrated with immediate photos and a coordinated campaign of war propaganda by a compliant media, reached new heights.

Protecting civilians is the claim made by the imperialists to justify their massive bombings, destabilizations campaigns and starvation sanctions — resulting in the deaths of hundreds of thousands of civilians.

A wider war exploding from a confrontation in Syria is a growing danger. Most dangerous right now is that it coincides with the installation of extreme right-wing war hawk John Bolton as Trump’s new national security advisor.

When the U.S. ruling class wants a war, the corporate media fall into line. Whether it was the phony claim that Iraq had weapons of mass destruction in 2002, which U.S. officials knew to be a lie, or the phony “attack” by Vietnamese PT boats on a U.S. warship in the Gulf of Tonkin in 1964, the U.S. media have repeated the government’s lies to justify its wars.

This goes all the way back to the sinking of the battleship Maine in 1898, which was used to justify the Spanish-American war. A U.S. Navy inquiry in 1974 commissioned by Admiral Hyman Rickover concluded that the Maine sunk, not because of a Spanish mine, but because munitions stored aboard caught fire and exploded.

U.S. military corporations have an enormous stake in continued war. But it goes wider than that. The big imperialist corporations and banks fear the defeat of all U.S. strategic plans for the region. So once again military, corporate and media forces are dragging out the same playbook they have used time and again to keep U.S. troops in Afghanistan, south Korea, Syria and the more than 1,000 U.S. military bases around the world.

It is especially ominous that Russia was immediately blamed, along with Syria. Russian and Iranian assistance to Syria has helped frustrate U.S. plans for the overthrow of the Syrian government. In their constant drumbeat of nonstop demonization, U.S. opinion molders don’t even bother to present facts or motivation when making charges against Russian President Putin.

They also paint a dire picture that a U.S. military pullout from the region would lead to chaos and benefit Russia, Iran or China, while also leading to a resurgence of the Islamic State group in Syria. What the war planners really oppose is a unified, sovereign Syrian state.

Progressive forces opposed to endless U.S. wars must confront these criminal charges against Syria and demand of the U.S. warmakers: “Hands off Syria!”

Sara Flounders is an American political writer who has been active in ‘progressive’ and anti-war organizing since the 1960s. She is a member of the Secretariat of Workers World Party, as well as a principal leader of the International Action Center.[1] She also frequently writes for Workers World newspaper.