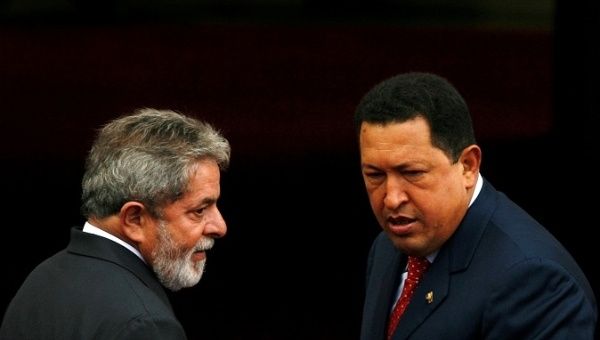 “A hug of solidarity for my comrade and brother, Lula da Silva. We all know that his ‘crime’ is having lifted 38 million Brazilians from poverty, without giving in to the Brazilian elites.”

The Venezuelan foreign ministry expressed its “felt solidarity” with Lula, who it said, “had been a victim of the most grotesque injustice on the part of sectors of the right-wing with the goal of impeding his imminent election as Brazil’s president.”

“the right-wing, facing its inability to win democratically, chose the judicial path to intimidate popular forces.”

“The first thing that we want to emphasize is our message of solidarity, of strength, of affection in the name of our people for our beloved comrade, two-time President of Brazil Luiz Inacio Lula da Silva.”

“We have known and admired you in every stage of the magnificent battles you have fought, as the soul of our rising people, defending our ancestral and present rights, freedom, patrimonies, work, justice, democracy and peace.”

Director General of Latin American and the Caribbean in the Cuban Ministry of Foreign Relations Eugenio Martinez said:

“The decision is a new expression of the long and unjust campaign against Lula, against the Workers’ Party and the leftist and progressive forces in Brazil.”

Martinez also pointed out that Lula continues to be the most popular political leader among the majorities.

“The right will never forgive him for having taken 30 million out of poverty. We are with the leaders of the people.”

Uruguayan Senator and former President Jose Mujica said he is “with Lula with all his human solidarity: always, when it rains, it stops.”

“bad news for democracy in Brazil and Latin America… Lula is the leader with the most popular support and I hope and trust that democratic institutions in that great nation correct these serious decisions.”

A group of Argentine senators of the Front for Victory released a statement in solidarity with Lula, saying that

“the plan of the right-wing is to ensure that there are no more popular leaders that govern for the people.

“The plan of the concentrated powers is unequivocal for all the Latin American region: to impede the return of popular processes. The justice system and media work together to install the neoliberal model in the region.”

The secretary-general of the General Confederation of Peruvian Workers, Geronimo Lopez, told Prensa Latina that Lula’s persecution is

“part of the strategy of the United States and the continental right-wing to stop the advance of socialist governments.”

The Socialist Party of Peru also expressed its solidarity, saying in a statement that

“these moments are the indignation and struggle of all our America and Peru against the pyrrhic victory of the oligarchy, of the most reactionary and mafia-like sectors of Brazil.”

Telesur is a Latin American multimedia platform oriented to lead and promote the unification of the peoples of the SOUTH*.