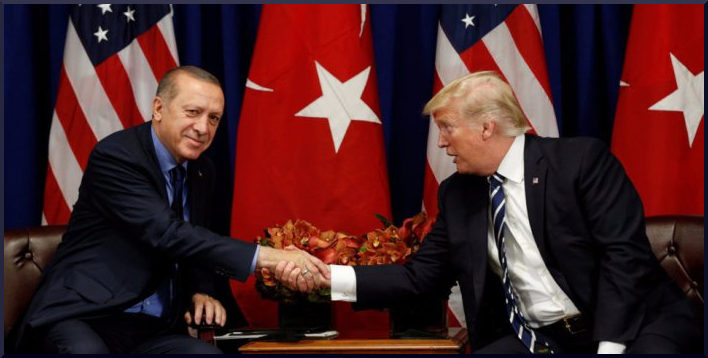 The U.S. imperialist war against the Syrian government and people stood exposed as never before when the fighters it had backed to the hilt in the name of fighting the Islamic State (ISIS), the Kurdish-led Syrian Democratic Forces (SDF), essentially switched sides and signed a pact with the Bashar Assad government. The objective? To join forces against Turkey’s invasion of northwestern Syria.

Last month, the Kurdish People’s Protection Units (YPG) stated, “After a month of our forces’ epic resistance to the Turkish invasion and the terrorist organization allied with it,” the YPG asked the “Syrian government and its army to perform its duty by participating in defending Afrin and protecting the Syrian borders. The Syrian government has answered our call … and sent military units on Tuesday, February 20th, to be stationed along the borders and to help in defending the unity of the Syrian territories and its borders.”

A Feb. 28 New York Times article confirmed the dramatic shift in the relationship of forces that had been largely concealed or minimized by the warmongering corporate media over the past few weeks. The Times wrote, “Thousands of Kurdish fighters and commanders who make up the backbone of the Syrian Democratic Forces in recent weeks have diverted [defected] to defend Afrin, in Syria’s northwest, where other Kurdish militia are facing sharp attacks from Turkish troops.” These “Turkish troops” include the so-called Free Syrian Army, organized and funded by U.S. imperialism to overthrow the Syrian government. Thus, the world became witness to the spectacle of NATO-allied Turkish jets raining death and destruction on the Kurdish YPG and the Syrian Army while “Free Syrian Army” troops slaughtered both on the ground in the same Afrin region.

The Times, referring to the escalated fighting in Syria as akin in intensity to World War II, reported that U.S. jets attacked Syrian-allied Russian forces and Syrian government troops seeking to retake parts of Syria from ISIS in the Euphrates River region to the west. To complete the U.S.-led onslaught on Syria, Israeli jets, using the pretext of a stray drone over its territory, mercilessly bombed Syria. The Zionist settler state news media claimed to have taken out one-third of Syria’s air defenses.

The now open rift between the Kurds and U.S. imperialism had its origins in Afrin during the past two months when U.S. officials assured its NATO ally, Turkey, of its long-term intentions in Syria. Former U.S. ambassador to Turkey and Iraq, James F. Jeffrey, bluntly stated,

“We told the Turks that the Kurds were temporary, tactical, and transactional to defeat ISIS. Now we need them to contain Iran. The whole purpose of this is to split the Russians from the Syrians by saying we’re going to stay on to force a political solution in Syria” (The New York Times, Jan. 22, 2018).

Secretary of State Rex Tillerson made U.S. objectives clear in a Jan. 17 Stanford University speech, in which he proclaimed that the U.S. was preparing a permanent U.S.-orchestrated Syria occupation force of 30,000 troops aimed at partitioning close to one-third of Syria in the north (see “U.S. seeks Syria partition,” February 2018 Socialist Action).

Assuaging Turkish fears that the U.S. will abandon Turkey’s ongoing efforts to destroy Kurdish forces in northern Syria, on the one hand, while convincing the increasingly wary Kurds to remain in the so-called fight against ISIS on the other, is no easy task. To this end Secretary of Defense James Mattis, Secretary of State Rex W. Tillerson, and Lt. Gen. H.R. McMaster (the White House national security adviser) have all met with Turkish officials in efforts to convince them, with little success, to refrain from attacking their now-wavering U.S. Kurdish allies.

Maj. Gen. Jamie Jarrard, Special Operations commander for the American-led coalition in Iraq and Syria, boasted in early February that the elimination of the entire [ISIS] caliphate was “very close.” Jarrard added, “Anything that disrupts us or takes our eye off that prize is not good.” In truth, the U.S. focus today is qualitatively less on ISIS, whose growth and influence was largely tolerated as long as its guns and weapons—provided by the U.S. and the Arab State monarchies—were trained on the Syrian government. Today, President Trump repeatedly states that the so-called U.S. war against ISIS is all but over. But ISIS’s defeat was qualitatively more the product of the Syrian government forces and its invited allies—Russia, Iran, and the Lebanon-based Hezbollah—than it was to selective U.S. bombings.

A sovereign and historically oppressed Syria exercised its right to self-determination when it requested military aid from Russia and others. In point of fact, were it not for Syria’s allies, there is no doubt that uninvited U.S.-backed imperialist troops and the U.S. itself would be occupying Damascus today as neo-colonial conquerors.

The seven years of war in Syria clearly demonstrates that whenever ISIS and its associated reactionary forces, al-Qaeda and other imperialist coalition-backed mercenaries, headed south toward Damascus, they were allowed to proceed unhindered. Today, less than 400 ISIS forces remain in Syria. Those that previously occupied and exploited northern Syrian oil fields and used them to finance their goal of overthrowing the Bashar Assad government were allowed to proceed with impunity.

Today, these same oil fields are under direct U.S. control, as is the northern region in general, where the U.S. oil magnates hope to construct pipelines across Iraq and Syria to the Mediterranean. In the meantime, the U.S. occupation of Syria, as with Iraq, will undoubtedly see U.S. corporations stealing Syrian oil to pay for the costs of the U.S. war!

The Syrian Democratic Forces are reported to consist of 50,000 Kurdish and Arab fighters based in eastern and northern Syria. While the Kurdish fighters are said to be only 40 percent of the SDF, they are the most effective anti-ISIS fighters and are overwhelming based in northern Syria along the Turkish border where the Kurdish population is the largest. In only rare and exceptional instances have they been arrayed against Syrian government troops.

Today, 20,000 Kurds have rallied to Afrin to join forces with Syrian government troops. This Kurdish force originated from the U.S.-held Deir al-Zour region, where ISIS forces were allowed to relocate after their defeats in Raqqa and elsewhere. Once in the Deir al-Zour region, however, U.S. warplanes attacked both Syrian Army and their Russian-allied forces when they sought to liberate this area and its environs.

Commenting on the fracturing of the SDF, which consists of Kurds and regional Arab forces, with the latter recruited by the U.S. to either overthrow the Syrian government or otherwise support U.S. imperialist interests in the region, Jennifer Cafarella, a senior intelligence planner with the Institute for the Study of War in Washington, noted, “The SDF is unlikely to clear remaining ISIS-held areas of the Euphrates River and could even begin to take losses due to the shift in Syrian Kurds’ main effort.”

Cafarella here suggests that the Russian/Syrian government advances toward Deir al-Zour also provided the Kurdish fighters’ safe transit to Afrin across government-controlled territory and exploited their departure to strike the less experienced Arab partners in the SDF. Muhammed Abu Adel, a top Kurdish commander and a leader in Manbij (a city in northern Syria with a large Kurdish population and home to a contingent of U.S. Special Operations troops), expressed the now widely held distain for U.S. imperialism’s supporting Turkey’s attacks on his city. He exclaimed, “We sacrificed thousands of lives of our soldiers, we sacrificed so many to finish ISIS and now this, while fighting the most terrible terrorist group, and suddenly there is a state member of NATO come to fight you.”

In early March, U.S.-backed forces in the Damascus suburb of Ghouta, along with a host of Qaeda and related terrorist forces, found themselves near defeat at the hands of the Syrian Army. The U.S.-allied terrorists there had been shelling downtown Damascus and other highly populated areas in this capital city for most of the past seven years.

Today, on the verge of defeat, these “rebels” sought United Nations support in the form of a “humanitarian relief” resolution aimed at allowing the U.S. and its allies to “legally” intervene as it did in Libya in 2009-10, when U.S. jets and offshore bombings destroyed Libya’s infrastructure based on the now-discredited pretext that the Libyan government was poised to slaughter some 80,000 civilians in Benghazi. The same version of “humanitarian relief” was employed in Iraq under the similarly discredited pretext that the Iraqi government was poised to use “weapons of mass destruction.

On the suggestion of the Syrian government, Russia’s UN Security Council representative vetoed the U.S.’s thinly disguised effort to secure support for yet another imperialist slaughter.

U.S. to remain in Syria

A Feb. 22 New York Times headline read: “U.S. Says Troops Can Stay in Syria Without New Authorization.” The article opened as follows: “The Trump administration has decided that it needs no new legal authority from Congress to indefinitely keep American military forces deployed in Syria and Iraq, even in territory that has been cleared of Islamic State fighters, according to Pentagon and State Department officials.”

Today, estimates vary widely and change daily as to how many troops these are. Last month, Trump administration officials put the number at 5,000, not counting the troops stationed in Qatar to oversee the U.S. bombing of Syria or the additional thousands on board U.S. warships in the Mediterranean. Add to this the usual covert privatized mercenary forces, the “Special Operation” CIA death squad forces, the drone operations and now three permanent military bases in northern Syria, and it’s clear that the U.S. imperialist beast is in Syria to stay, even if its entire “coalition of the willing” isn’t, and even if Kurdish forces are departing.

In the U.S. a new and critical factor is emerging to challenge all U.S. wars—at home and abroad. The April 14-15 nationwide regional mobilizations initiated by the United National Antiwar Coalition and the Coalition Against U.S. Foreign Bases are the perfect starting point to mobilize mass opposition to U.S. imperial war policy.

Join the struggle!
Self-determination for Syria and all oppressed nations!
U.S. Out Now!
Contact: SpringAction2018.org

Jeff Mackler  is the national secretary of Socialist Action, a Trotskyist political party.[1] He was the nominee of Socialist Action for United States Senate in 2006 and President of the United States in the 2016 election. Mackler founded Northern California Climate Mobilization, is a longtime teacher and union activist with the American Federation of Teachers in Hayward, California and is director of the Mobilization to Free Mumia Abu-Jamal.