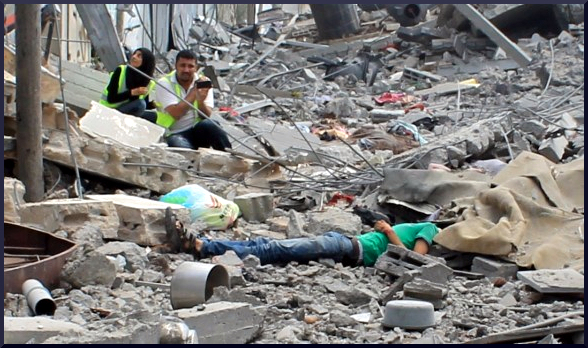 Salem Shamaly after he was shot and killed July 20, 2014 in Shujaiyah, Gaza, followed by international volunteers

The other night in Brooklyn, I caught two activists from the International Solidarity Movement, Rana Nazzal and Joe Catron, describing their work in Palestine to 70 people crowded into the Commons Cafe. The tour continues tonight in Syracuse and on to many other venues in Canada and the States (and at times includes our own artist Katie Miranda). I would urge anyone who wishes to understand the depth of the conflict to catch one of these appearances.

The tour is noteworthy because it conveys to Americans, in the most unrhetorical manner, some small portion of the immense trauma that Palestinians are experiencing. Two activists come to the stage and speak plainly about their experience. Both began these talks with videos, and both videos– as the activists warned us– contained film of a Palestinian being shot and killed by Israeli soldiers.

Joe Catron showed us the famous killing of Salim Shamaly in Gaza in 2014. In Nazzal’s case it was Rushdie Tamimi in Nabi Saleh in 2012. (Rushdie Tamimi was the maternal uncle of Ahed Tamimi, the 17-year-old just sentenced to 8 months in an Israeli jail.)

That is of course a very shocking way for a presentation to begin. The room was stunned. But the videos broke a seal, too: they reminded us of our own safety and informed us that we have no idea what life is really like under occupation, what it is really like to be in such an unbalanced and violent place.

An entire volume could be written about the scene of Shamaly’s killing: the ruins of Shejaiyah in eastern Gaza City, in which he was seeking out survivors. The structural wreckage looked like what Dresden or Guernica or Pompei must have looked like. It defies the imagination.

The extreme character of the presentation is helpful because no one can deny the tremendous trauma that these people are experiencing. I found myself weeping when Manal Tamimi and Bassem Tamimi spoke in an excerpt of an ISM movie, The Radiance of Resistance. I cannot capture either person’s eloquence here; but Manal explained something to me. This is what I heard her say.

You see that our children are traumatized. This is not normal. Who would expose their children to such violence? What parent would do such a thing? We had no choice. This was visited upon us. These children have witnessed terrible violence from the time that they were quite small. What is it like for a child to see her uncle killed before her eyes and she can do nothing about it? There is only one way for human beings to respond to these conditions: to resist them. That is what our children are doing.

The ISM is Palestinian-led, and its overseas recruits are very special people. Remember Rachel Corrie, who was killed 15 years ago by an Israeli bulldozer in Rafah– what a special person she was, who could not see an injustice without it sweeping her soul. The two American activists I saw in Brooklyn were also seized by what they saw, and had to act. On Nazzal’s first visit to Palestine, in 2008, her mother brought her to a demonstration in Nil’in at which 10-year-old Ahmed Mousa was killed when he ran back to the scene of a protest to find the shoe he’d lost, and at Ahmed’s funeral, 18-year-old Yousef Amira was shot and killed; and Nazzal was transformed. Not many people are like her. Most of us are less disturbed by the persecution of a faroff people. On Monday night that persecution did not seem at all faroff. We sat in silence seeing what our tax dollars have done.

My own understanding of radical activism came from an Irish union organizer in a packed Cairo hotel restaurant in December 2009, as international activists gathered to go on the Gaza Freedom March, and the Mubarak regime prevented our travel, and the marchers prepared to demonstrate in Tahrir Square. He said that there was a place for everyone in a movement, depending on your temperament. Maybe you wanted to be arrested and dragged through the street, or maybe you were afraid to do that. Maybe you wanted to chant, maybe you wanted to video, or document or lawyer, or write. Maybe you just wanted to give money (as you can to ISM on this tour). But there was a place for everyone who wanted to take a moral stand. The ISM tour shows how much work there is for us to do.

Phillip Weiss is a blogger, and Founder and  co-Editor of the popular Mondoweiss Blog which focuses on issues around Palestine and Israel.