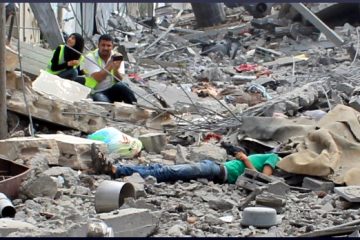 Salem Shamaly after he was shot and killed July 20, 2014 in Shujaiyah, Gaza, followed by international volunteers by Phillip Weiss, originally published on Mondoweiss, March 21, 2018 The other night in Brooklyn, I caught two activists from the International Solidarity Movement, Rana Nazzal and Joe Catron, describing their work in Palestine to 70 people crowded into the Commons Cafe.[…]