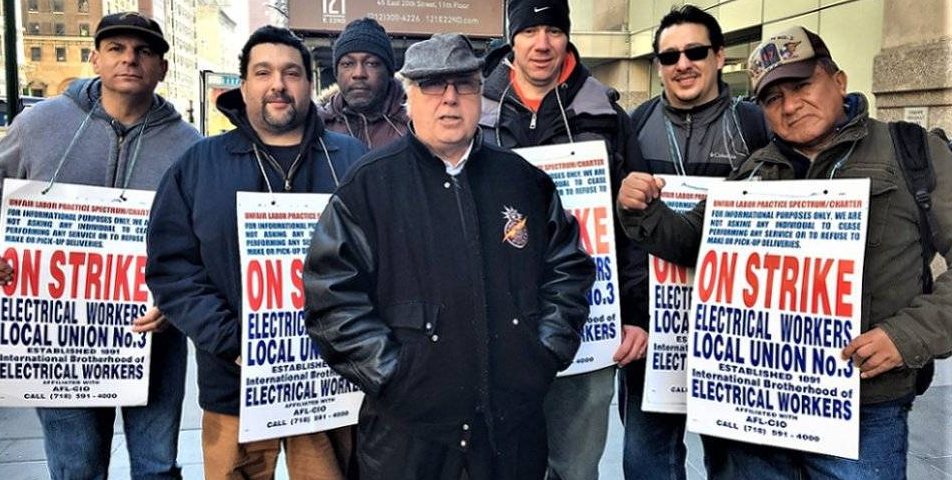 Union busting is the name of the zero-sum game that telecommunications giant Charter Communications, known for its Spectrum brand, is playing in New York City against 1,800 workers in International Brotherhood of Electrical Workers Local 3, who have been on strike since March 28, 2017.

During a negotiation meeting with Charter days before Christmas, the union agreed to drop all its demands for raises in pensions, health care coverage and other benefits for new hires as long as current workers continued under the old plans, stated Christopher Erikson, business manager of Local 3, on the Feb. 7 radio show “America’s Work Force.” But the company flatly turned that proposal down. “If the company can beat Local 3 in New York City, that does not bode well for labor anywhere in the U.S.,” warned ­Erickson.

Meanwhile, no good news for Charter. A judge refused to bar striking workers from coming within 25 feet of any Spectrum facility. (NY Post, Jan. 9) A judge ruled that Charter must face a lawsuit by the New York state attorney general for “providing customers slower-than-advertised internet speeds.” (Reuters, Feb. 16) And a city government report showed that Charter lied when it flouted the terms of its franchise agreement with the city to “use local labor whenever possible.” (NY Daily News, Feb. 25)

The 1,400 telecommunications workers at Frontier Communications in West Virginia and Ashburn, Va., went on strike March 5 for a new contract with guaranteed job security and good health benefits. Frontier has cut 500 jobs since it acquired Verizon lines in West Virginia in 2014. Customer complaints have steadily increased ever since. (WV News, March 5)

Communication Workers District 142, the union representing the workers, states that after 10 months of negotiations and two extensions, the company failed to come to an agreement with the operators, maintenance administrators and technicians. Instead, Frontier hired scabs who don’t know how to handle the complex equipment and has not resumed bargaining. But support has poured in from many national unions as well as the community. With the resounding echo of the victorious teachers’ strike in the air, the workers have an ear toward victory.

The three demands of Black Lives Matter Week of Action, Feb. 5-10, were to hire more Black teachers, mandate study of Black history and ethnic studies, and replace harsh disciplinary policies with a restorative justice approach. This week-long push to affirm the value of Black lives in schools was born in Philadelphia and Seattle last year and has since spread, thanks to rank-and-file teachers’ unions, to over 25 cities. (Philadelphia Inquirer, Feb. 7) Some school districts expanded the week to a full month during Black History Month.

Teachers organized around local issues. Los Angeles students and teachers mobilized against random searches targeting Black youth with a “Students not Suspects” campaign. The Chicago teachers’ union fought school closings that disproportionately hurt Black neighborhoods and hiring of Black teachers. Baltimore teachers explored the lives of Huey Newton and Kathleen Cleaver with a “Black Panther Party Mixer” and adapted Langston Hughes and Maya Angelou poems tied to principles of the BLM movement. Seattle teacher Jesse Hagopian noted the effort “might be unprecedented when you think about the fact that these unionized workers from around the country are coordinating these events together.” (The Real News, Feb. 5)

“What’s a crying shame? Ronald Reagan in the hall of fame!” chanted members and supporters of the American Federation of Government Employees in an impromptu picket March 1 outside the U.S. Department of Labor. They denounced Reagan’s induction into the so-called “Labor Hall of Honor,” citing his firing of 14,000 striking PATCO workers in 1981. According to a United Steelworkers statement, that “gave a green light to corporate chieftains to declare war upon workers and unions. … The union movement suffered because of him.” Protesters also denounced Reagan’s deep cuts to the Occupational Safety and Health Administration’s enforcement program. (March 2)

The Trump administration announced plans to reverse crucial safety standard protections against pesticide exposure and poisonings. These safety standards were put in place to protect the 2.5 million farm workers — the majority of them immigrants — in the U.S. who experience a reported 10,000 to 20,000 pesticide poisonings per year. To protect these vital workers, sign the petition addressed to senators at tinyurl.com/ya7supjw.