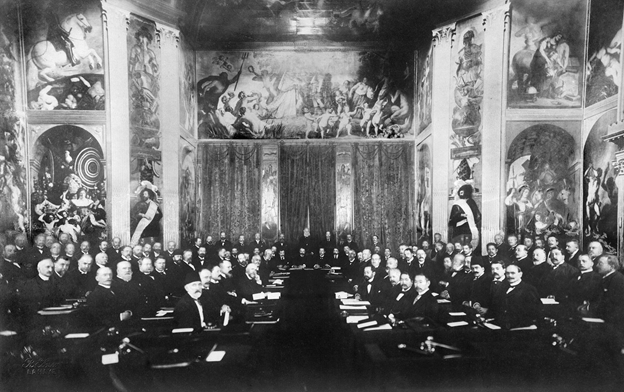 Delegates to the 1899 Hague Convention got it right on aerial bombardment.

Those of us who have been advocating for an end to drone attacks and the disarming of drones have “ancestors” in those who, in 1899, persuaded The Hague Convention to adopt a five-year ban on dropping bombs from hot air balloons and “other new methods of similar nature”, like airplanes.  Unfortunately, WW I intervened in a process that was intended to extend the ban through successive peace conferences.  This, along with the wonder at the devastation made possible by bombing, killed the dream of stopping aerial attacks.  Imagine what a different world we would have if the ban had held.

Now we find ourselves at another historic moment.  There is a chance that German politicians may take a position against arming drones, expanding on the decision last year by key German parliamentarians to reject a drone deal with Israel because the drones in question were built to carry weapons as well as having surveillance capability.  Elsa Rassbach, CODEPINK representative in Germany, will be having discussions in the next several weeks with some leading German parliamentarians on their positions with respect to armed drones.

There is increasing urgency for an international ban on armed drones because of the technological rush to develop autonomous drones, drones that can be programmed to make their own killing decisions, acting on digital facial recognition or other programed targeting matrices.

The Bard College analysis of the Pentagon drone budget in 2018 http://dronecenter.bard.edu/files/2017/10/Drones-Defense-Budget-2018-Web.pdf shows $457 million being devoted to research on autonomy and the teaming and swarming of drones.  This is an increase from $431.4 million in 2016 and the most devoted so far by the U.S. to this type of research.  (See page 5).

Some European nations are extremely concerned about autonomous drones, as evidenced in this report https://www.sipri.org/sites/default/files/2017-11/siprireport_mapping_the_development_of_autonomy_in_weapon_systems_1117_1.pdf, also a must-read, from the Stockholm International Peace Institute.  The executive summary of the report notes:

“The United States recently cited autonomy as a cornerstone of its strategic capability calculations and military authorization plans.  This seems to have triggered reactions from other major military powers, notably Russia and China.”

Elsa has also provided these links to other European reports showing deep concern over the advancement in drone warfare.  http://www.europarl.europa.eu/thinktank/de/document.html?reference=EXPO_STU%282017%29578032

Elsa speaks in detail about the political drone war dialogue in Germany in this linked tape. https://www.youtube.com/watch?v=JLKtEdUmM2I

We have reached a point in U.S. press reportage where drone warfare is no longer differentiated from what has come to be called “the air war against terrorism”.  Obviously, the U.S. military, the President, the Congress and corporations all want public concern about drone surveillance and assassination to simply go away.  The American public is supposed, in their view, to see drone war as a minor subheading to war, or more exactly, the absolute necessity of war.

Europeans, however, have a very keen memory of what modern warfare means, particularly air warfare, built bit by bit on one technological advance after another into a terrifying monster that now haunts the planet.  The U.S. apparently has plans to let this monster make even more life and death choices itself.

Clearly, this is a time for us to go back to our members of Congress and call on them to introduce legislation that would bar the arming of drones.  Obviously, this is an uphill struggle, as usual, but given that Trump is now the drone decider and autonomous drones are nearly operational, we may find more cooperation in the Congress.  It would be great if the concern of the Europeans would somehow catch the notice of our politicians in the U.S.

Editor’s note: There is more information on Germany’s conflicts of interest related to US actions at Ramstein Base, a necessary technical hub for US drone warfare and targeted killing throughout West Asia and Northern Africa at https://reports.papillonweb.net.