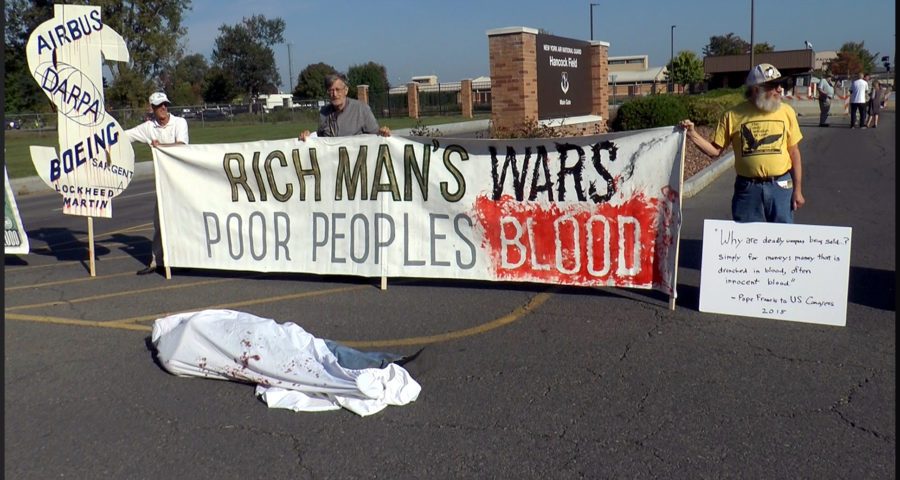 by Ed Kinane, originally published on Reports from Hancock and Beyond

Violence begets violence. War profits only the few, the rich, the powerful — the 1%. As moral beings and tax paying citizens we must vigorously oppose war. Especially those wars of aggression perpetrated by the United States and its allies and proxies. These mostly occur in or near the Islamic oil lands (Iraq, Afghanistan, Yemen).

We must oppose resource war and wars of weapon demonstration (drones over Gaza). We must oppose war for corporate profit. War industry lobbying (Lockheed Martin) and election buying corrupts our Congress, our Executive Branch and any legitimate defense force. War dehumanizes the “other.” It dehumanizes and disempowers ourselves.

Not only must we oppose war, we must oppose militarism: the incessant search for enemies, the incessant preparation for war, the saturation of our economy and culture with martial values and vested interests in war.

WHAT MUST BE DONE (personally and nationally)

Our ultimate mission: “achieving a global just peace by abolishing war and militarism.” Okay, we’re unlikely to achieve that utopian goal. But work on these “can-do” campaigns has a huge payoff: reducing human suffering, plus empowering ourselves and others. We can’t do everything, but we can do something. Each of us needs to do what we can, with what we have, where we are.

Is there a more authentic way to spend our lives than that?