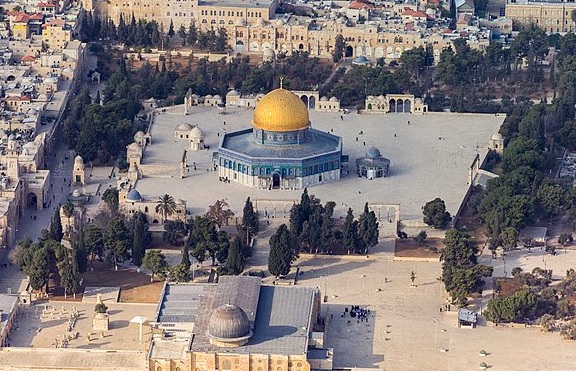 by Sahar Qumsiyeh, originally published on her Blog on Dec. 6, 2017

As many of you know, President Trump today recognized Jerusalem as the capital of the State of Israel.

I feel many of the people in the US may not understand why Palestinians are upset about this decision, or may not know what this may lead to. I wanted to write a post to clarify.  I specifically wanted to address the lies claimed by President Trump. More than the actual recognition of Jerusalem as the capital of Israel, it upsets me more that a president of a great nation can stand up on national TV and tell lies. So, I am writing this blog in response to him and to those that think this was a good action.

Here are some of his words, I am not re-phrasing, but I am abbreviating.  Trump called Israel the most “successful democracies in the world.”

Trump said that in Israel, “Jews, Muslims and Christians and people of other faiths are free to live and worship according to their belief.”

Trump said that this course of action is for the “best interest of the United States of America and for the pursuit of peace between Israel and the Palestinians. This is a step to advance the peace process and to work towards a lasting agreement.”

First point: Israel is a democracy.

Some may look at the democracy just for Israelis. Well, if you do, then what about the Palestinians who have Israeli citizenship who get treated different than other Israelis. But I think we should also consider everyone who lives in the Holy Land. Half of the population consists of Palestinians who live on less than 10% of the land and who have no say on what goes on.  Israel controls their movement, their water, and their lives.  There are even roads on which Palestinians are NOT allowed to drive. These are roads only for Jews! How is that a democracy? You can call it what you want, but I call it racism.

When Palestinians go out to the street to protest, they are shot at using tear gas bombs and live ammunition. I know since I was one of those people demonstrating against the injustices done to my people many times. I smelled tear gas often and have seen people get shot simply because they were protesting. You can call this a democracy, but I call it terrorism.

If you are a Jew, you can build a house anywhere in Israel and live anywhere. If you are a Palestinian, you can only live in designated areas surrounded by 25-foot concrete walls (we call them concentration camps).  If you are one of the very few lucky Palestinians who live in Jerusalem and have an Israeli ID, then none of the rules that apply to Jews apply to you.

If you are a Palestinian and have a house in Jerusalem, you risk evacuation or your house being demolished simply for fixing your leaking roof.  You also risk losing your home if a Jewish family supported by the Israeli government decides they want to live in your home.

Here is an example of a Palestinian man who lost his house in Jerusalem. One night, the Israeli soldiers came to his home and dragged him and his family out by force. He lost his family home. A home that has been in his family for generations. His childhood home and his father’s childhood home. He was devastated and he was now homeless. He was not compensated for the house and was not even allowed to take many of his belongings.

Years later, this man saw his house in an auction. He went and made the highest bid to buy his own house back. When the committee found out he was Palestinian they disqualified him. They said that even if he made the highest bid, he still could not buy his house because he was not Jewish.

Second point: People of all faiths can worship freely in Israel.

The majority of the Christians like me and my family are not allowed into Jerusalem to visit the places where the Savior was crucified, where He was buried and resurrected. We are not allowed to go the Galilee or Nazareth.

After I joined the LDS church in 1996, the only LDS church meeting place was in Jerusalem. I was turned back many times by the Israeli soldiers and was forbidden from entering Jerusalem and worshiping with fellow members of the church. I was even chased, shot at, humiliated and almost arrested countless times by Israeli soldiers just for the simple reason that I was trying to go and worship God.

Third Point: This decision is good for the pursuit of peace between Palestinians and Israelis and will advance the peace process.

I am not sure how you see that President. We need clarification on this one because my people are outraged and are already demonstrating in the streets and by the end of this week many of them would get killed or arrested.

Here is a metaphor for you. Say we have two kids David and Ali. They don’t particularly get along and are always fighting. David had 9 pieces of candy and Ali had one piece. Ali has never had any candy and he was always an oppressed child. The piece he had in his hand was a precious possession of his.  You go into the room, slap Ali in the face, take his candy and give it to David. And then you tell Ali that the candy was David’s right all along and you are just doing what others should have done a long time ago.  After you leave the room, what do you think Ali will do?

Now you go out of the room smiling and tell the kids’ parents that you took Ali’s candy in order to advance the peace process between the two kids.

I want to end by saying it is not Jerusalem that is the main issue here. The reason everyone is so upset is that Jerusalem was the last straw … My people have lost their land and have been oppressed for over 60 years. We don’t want Jerusalem only, we want our whole country back. We want our freedom, our identity, our dignity, and our voices to be heard.

This picture shows our loss of land over the years: