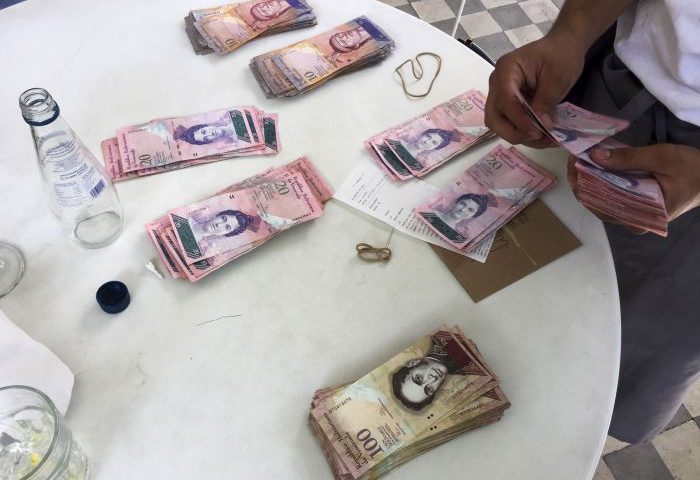 Credit agency Standard & Poor has ruled Venezuela in default after the country missed $237 million in scheduled bond payments. This comes amidst an economic crisis with official inflation around 4000% and price increases well over 1000%. President Nicolás Maduro’s attempt to restructure is hindered by sanctions that stop U.S. banks from buying any of the resulting debt.

Maduro has undertaken a dramatic restructuring at state-owned oil firm PDVSA. General Manuel Quevado now heads the firm, and more than 100 officials have been arrested on charges of corruption. Six executives at PDVSA’s U.S.-based refinery corporation CITGO have been detained, among them several U.S. citizens.

Maduro called for a “new oil revolution” as PDVSA’s output has declined from 2.4 million barrels per day (bpd) to 1.9 million bpd in the last year. Oil industry watchers have expressed fears that military control will lead to further drops in production. Oil is Venezuela’s main export and source of hard currency for imports and debt payments.

There are constant shortages of basic goods. This has hit medicine particularly hard, as even antibiotics like penicillin are scarce. Birth control had previously been available for free as part of Venezuela’s social programs; now it is only found on the black market at outrageous markups.

Maduro and his supporters blame their woes on economic warfare against Venezuela. While there is a measure of hoarding, most of the shortages come from the combination of price controls and currency controls. Imports have stopped because the combination would require goods to be sold for less than they originally cost. Corn production has dropped 50% since 2008, with farmers unable to obtain seed or sell their product at a profit.

Criminality is endemic in today’s Venezuela. The country’s murder rate is 91.8 homicides per 100,000 population—compared to five in the United States. The situation is so desperate that the armed forces can no longer drive at night because soldiers are frequently attacked for their weapons and money.

Maduro’s popularity is extremely low, around 23% in recent polls, but over 61% of Venezuelans oppose sanctions. Luckily for the ruling PSUV (United Socialist Party), the political opposition has fractured. The MUD (Democratic Unity Roundtable) coalition was split over participation in October’s regional elections, and PSUV won an unexpected 54% of votes.

Former governor Antonio Ledezma escaped house arrest and went to Spain by way of Colombia. Freddy Guevara of the Popular Will party asked the Chilean embassy for asylum. Democratic Action (AD), the largest party in MUD, acted independently of its partners and accepted several posts from the controversial National Constituent Assembly (ANC). Dialogue between the government and opposition is expected to continue later in December.

Maduro has been relying more heavily on the armed forces to maintain control. Handing PDVSA over to the military is the “jewel in the crown” of the alliance between the president and his generals. A new law prohibits social media postings that “promote fascism, intolerance or hate.” In recent days, Human Rights Watch has reported systemic torture of anti-government protesters. Maduro’s increasing authoritarianism follows the trend of populism in decline and raises frightening prospects for Venezuela’s future.

The Venezuelan revolution had high hopes under Hugo Chávez, Maduro’s predecessor, but it never went beyond using oil profits for social benefits. The economy remained capitalist, and Chávez leaned on the “Boliburguesía,” millionaires around the oil industry who were sympathetic to his project. He also continued to faithfully make payments on Venezuela’s foreign debt, a policy Maduro followed even as it depleted the country’s cash reserves.

Chávez tried to have a revolution without following the example of the Russian and Cuban revolutions, nationalizing industry and land. This left capital in power over the Venezuelan economy. Oil profits were spent or sent abroad rather than invested in durable state industry and agriculture. This worked with high oil prices but led to economic crisis once they dropped. Organs of local democracy grew in good times, but the crisis has led to a dangerous turn to the military and repression.

A mass revolutionary socialist party committed to completing the Venezuelan revolution is the first step out of the crisis. It must organize the struggle against the economic crisis and replace the capitalist government with a workers state. Such a revolution could not be confined to Venezuela but would spread throughout Latin America and the world.

If Maduro’s regime falls to the pro-capitalist opposition, it will be a disaster for the Venezuelan people. PDVSA would be privatized and revenge exacted on workers and the poor. But there is danger that if workers do not take control of the country, Maduro’s regime, supported only by the military, will move further down the road of repression and authoritarianism.