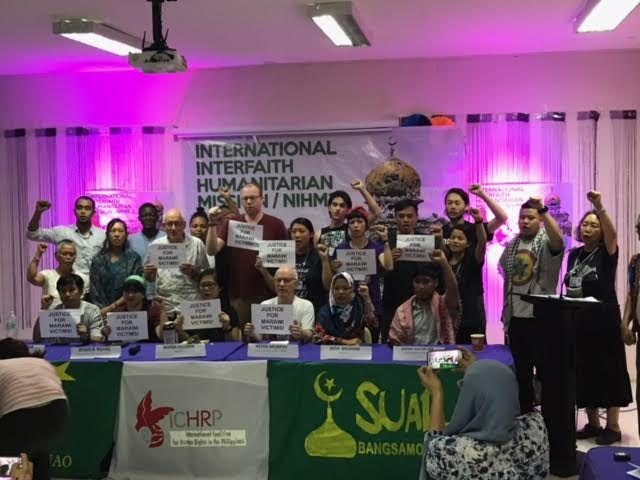 “The Philippines is not a prime piece of real estate for the US military, as Trump claims. Mindanao is not a playground for US war games. The Philippines is a former US colony where one of the longest armed revolutions and people’s struggles against US imperialism and for national liberation is based,” states Bernadette Ellorin of Bayan USA.

Ellorin and others with the US-based Filipino-American alliance traveled to Muslim Mindanao for as a part of a peace mission that launched with protests against Donald Trump’s visit to Manila last week for the ASEAN meeting and culminated in a fact-finding mission to evacuation locations of Moro communities displaced by the so-called ISIS siege on Marawi City last May.

“We joined an interfaith humanitarian mission that interviewed over 50 individuals in the evacuation locations. We documented cases of lives and property lost in the aerial bombings, massive internal displacement of whole towns, lack of resources, and the denial of the right to return,” states Vijou Bryant, a community health worker based in New York and part of the mission.

In its fourth installment, the Bayan USA peace mission not only tackled the impact and aftermath of the Marawi siege but the larger context of US-led war on terror in the form of targeted genocide of the Moro people.

“Why was it necessary to bomb and destroy Marawi City and displace over 400,000 people in order to stop less than 100 so-called ISIS-affiliated Maute group terrorists? Why were evacuation camps ready after the siege unless the military planned this much earlier? And why now, after the Duterte regime has declared Marawi liberated from ISIS, are the evacuees still not allowed to go return to Marawi? Perhaps it has something to do with the announcement of the Philippine Department of Tourism to transform Marawi into a tourism hub and open it up to foreign investors, including US corporate investors” states Rhonda Ramiro, Vice-Chair of BAYAN USA.

The 1951 negotiation of the Mutual Defense Treaty between the US and Philippine governments established 70% of Marawi as a Philippine military reservation. Despite this, Moro communities struggled to established their homes and businesses on  their ancestral domain.

“How convenient this US-funded war operation on Marawi is as a clearing operation to create a blank state and rebuild for the military and the corporations, instead of for the Moro people?” Ramiro stated. “And now with the Enhanced Defense Cooperation Agreement (EDCA), the US will be able to occupy these Philippine military installations in Mindanao. US and other foreign developers will collude with the Philippine government to build sites for tourism and for extraction for export. This is the endgame for the US funding and arming ISIS in Mindanao as well as funding and participating in airstrikes as part of the so-called anti-terrorist operations.”

“As US peace advocates, we have a responsibility to share widely what we learned about the situation in Mindanao, the role of the US government, and to support the Moro struggle for self-determination,” states Pamela Tau Lee of Grassroots Global Justice based in San Francisco.

“We also condemn the intimidation and harassment tactics of the Duterte government on all foreigners who participated in the anti-Trump protests in Manila,” states Jessica Rojas of Chicago Committee for Human Rights in the Philippines. “Does this mean that peace and justice activists are not welcome in the Philippines?”

An armed conflict broke in Marawi City last May 23 between the ISIS-affiliated armed Maute group and Philippine military. The clashes were followed by a declaration of martial law on the entire island of Mindanao and massive scale aerial bombings by the Duterte government with the support of the US aid and US Special Operations Forces that leveled a large section of Marawi City to the ground. ###