Thirteen-year old Adam Toledo was shot to death in the Mexican working class neighborhood of Little Village, among the most poverty stricken in Chicago. CPD officer Eric Stillman did this heinous deed on March 29, but a Chicago police cover-up reported otherwise. Months later video footage showed Stillman shooting an unarmed Toledo, whose hands were raised high above his head. Community outrage soon after boiled over with angry protests demanding justice while questioning whether the police had rigged the scene with a planted gun.

The CPD’s initial account claimed that an “armed confrontation” with police was in progress and that young Toledo was armed at the time. Stillman’s report stated that “The deceased did not follow verbal direction” — and that he faced an “imminent threat of battery with weapon.” The report continued, “The subject [Toledo] used force likely to cause death or great bodily harm.” All lies! The Toledo family’s attorney, Adeena Weiss-Ortiz, described the killing as an “assassination.”

On April 17, 2021, Kim Foxx, the Cook County state’s attorney, announced an investigation into why the prosecutor’s earlier descriptions of the shooting hadn’t matched the video. Later that day, Foxx’s office announced James Murphy, the prosecutor who had provided the “misleading” description of the video, would be placed on administrative leave. Foxx later admitted that she didn’t watch the full video and hadn’t reviewed Murphy’s statements prior to the court hearing.

Rutgers professor Lilia Fernández, who teaches Latino-Chicano History, says police brutality toward the Latino community is, “not a new phenomenon.” Said Fernández. “Adam Toledo would not be dead today if he were white, if he were from an affluent family or if he lived in a predominantly white neighborhood.” 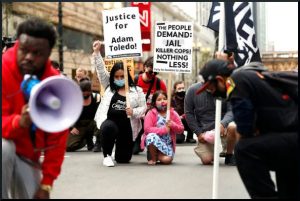 In 2017, the U.S. Department of Justice issued a report concluding that Chicago’s police had long engaged in using excessive force, especially against minorities. Two years later, the City of Chicago agreed to hundreds of recommended Department of Justice changes in its policing policies. The consent decree agreement was a product of the government’s investigation into the Police Department’s decades-long record of racist practices. Yet, for all the new rules and regulations on the books today the racist character of Chicago policing, as with the systemic racism that is inherent in every institution in capitalist system, will remain essentially unchanged.

Despite the myriad high profile police murders of Black and Latino victims in recent decades no real changes have occurred. Since June 2020 U.S. police have killed people of different ethnicities at virtually the same rate as they have for the past five years, according to several studies. On average, not a day passes when an unarmed person of color is not murdered by cops.

Toledo’s murder was widely seen as symptomatic of routine police terror in Chicago’s working class Black and Brown neighborhoods. The cop-enforced dictatorship of violence is well known. Protecting ruling class interests and the local oligarchy – who increasingly militarize their enforcers – is the rule. Intimidation, brutality, corruption and murder in communities of color, especially aimed at the youth, are the daily routine. Those like Toledo, who resist, by running away, are rounded up for future persecution, or murdered outright.

Chicago poet Kevin Coval, author of “A People’s History of Chicago,” said it well, “The gangsters are the entire establishment.”

Today, outraged community groups are demanding drastic action against killer cops. Latino and African-American community organizations, including the Chicago Alliance Against Racist and Political Repression, are demanding justice. Many are calling for passage of the Empowering Communities for Public Safety ordinance that is purported to give communities a decisive role in shaping public safety in their neighborhoods and establishing a semblance of their authority over Chicago police – supposedly creating a pathway for community control. Many are doubtful.

What is clear is that in one of the most economically unequal and segregated cities in the U.S. the police are increasingly empowered by the ruling class to violently corral whole working class neighborhoods of color, which are often adjacent to affluent neighborhoods of the white middle class moving in from the suburbs. The idea is to keep the unwanted people of color out.

Meanwhile city planners work with banks and corporations behind the scenes to further gentrify neighborhoods and drive poor people of color out of their own neighborhoods. A similar process in underway in nearby Pilsen as Starbucks replace the Supermercado.

Latino organizations have pointed to the phenomenon of “Polimigra,” essentially cop immigration enforcers in Latino neighborhoods, similar to and in alliance with La Migra at the border. True to their origin in the slave patrols along the Mason-Dixon line and as security forces to keep immigrants from going “beyond the pale,” that is, beyond their ghetto boundaries of immigrant neighborhoods, the message is clear, Don’t even think about resisting your assigned role as low wage, preferably undocumented, zero rights workers. And for youth like Adam Toledo, born here, growing up in Little Village neighborhoods of poverty – Obey the blue line of police tyranny or drown in it!

Activists and people of conscience must take action for a program of liberation of working class youth of color in their cities and towns.

Where Do We Go From Here?

We begin with the proposition that the term police reform is an oxymoron. Adam Toledo’s murder by killer cop Eric Stillman was no exception or accident or “mistaken” last second judgment error. His bullets and Derek Chauvin’s knee have been on our necks for four centuries. Their historic police ancestors emerged with the slave patrols of yesteryear. They were the post-Civil War police who arrested en masse Black Code designated “vagrants,” turned into instant prisoners then transferred to plantation chain gangs to work free for former slave owners; they were the racist Bull Connor heads of Birmingham’s Public Safety Commission hired to enforce the state’s “separate but equal” Jim Crow laws; they were and remain the scab-herding cops employed to break union strikes and club civil rights demonstrators. They are all part of the system’s inherent function to maintain the social order of the few against the vast majority. They are the enforcers of the school-to-prison scenario and the increasingly privatized U.S. prison-industrial complex that incarcerates a greater number and percentage of its population than any country on earth.

U.S. society’s systemic racism cannot be fundamentally altered by toothless “community control” ordinances. Without profound changes in relations of power between the oppressors and the oppressed, between the one percent who own nearly half the wealth of the nation and the vast majority who live pay check to paycheck, and the Black, Latinx and Native Americans who are compelled to live on much less, not much will change.

The right of Black, Brown and Native American people to control and govern their own lives and communities will only begin in earnest with this fundamental change in relations of power. This can emerge today with the formation of new, united and independent organizations dedicated to the freedom struggle in all its manifestations.

The struggle to disarm, defund, and disband the racist institutions of police power will begin with organized and democratic community control of the communities of the oppressed, by the oppressed themselves. Only in this context can the $billions spent on the institutions of racist police repression be used to defend and safeguard our interests not theirs.

The $trillions spent on bailing out the corporate elite, and the $trillions more transferred to them in “tax reform” bills must be spent on re-building the nation’s poor neighborhoods, inner cities, and tribal lands.

The movement we aspire to build will be based on the mobilized organizations of the oppressed themselves in alliance with all exploited working people, as opposed to utopian notions that the racist police institutions of the one percent’s cop enforcers can be reformed or transformed from enemies to friends. That job can only reside when the communities of the oppressed are organized to govern their own lives on the streets and in the political arena.

The example of the most poor and oppressed uniting to advance their freedom struggle has already inspired working people of all races and creeds to join in wholeheartedly. The courageous spectacle of unprecedented numbers of inspired white youth standing firm and side by side with their Black, Latinx and Native American sisters and brothers last summer, in defiance of curfews, police clubs and exploding noxious gas grenades, portends wondrous victories to be won now and in the immediate future. The 20 million strong Black Lives Matter mobilizations in the streets in 2,000 U.S. cities, joined by the Latino community in full force, did more to expose capitalism’s systemic racism and open the door to fundamental social change than all the empty utterances of the Democratic Party. The latter moved with full force to channel the power of the mass movement into the safe channels of capitalist politics wherein the former cohort of the Congressional southern racist bigots of past decades, Joseph Biden, became instantly transformed into today’s promised savior of the most oppressed. We need our own leaders, rooted in our own struggles for freedom and equality, and pledged to challenge the system itself.

Pushing China Out of Europe is Key US Goal, Threats, misinformation, belittlement and criticism - no method is too low on Stop the Wars At Home and Abroad: https://unac.notowar.net/2021/09/22/tussling-with-china-the-balkan-project-washington-wants-to-derail

Cubans are not even able to get remittances these days on Stop the Wars At Home and Abroad: https://unac.notowar.net/?p=12826