It has often been said that so-called “natural” disasters, including unforeseeable catastrophes, lay bare the weaknesses of the societies they strike. The health, social and economic crisis the coronavirus triggered is an example of this. An aggravating factor is that it has long been predicted that the spread of a virus similar in character was likely to occur.

But this crisis has exposed another aspect of today’s societies — the cutthroat competition among the world’s major capitalist powers in the race for vaccines, both for the colossal profits flowing to pharmaceutical companies and for geostrategic advantages.

Under present circumstances, all the abuses of imperialist capitalism take on dimensions of inhumanity and violence that normally are only found during open warfare.

Since the outbreak of the health crisis, even in the countries considered to be the most developed, what has become clear is the inadequacy of public health systems (due to undervaluing and underfunding), as well as the inability of private health services to respond to the emergency. The political power’s neglect of public health was evident in its disregard for the predictions that an epidemic outbreak was likely to occur.

The last few months have added another novelty: unbridled competition over vaccines. Earlier, a considerable number of countries agreed on a partnership called COVAX, under the aegis of the World Health Organization. Brimming with good intentions, COVAX was supposed to support research and production of vaccines and then their distribution on an equal footing around the world. Despite these plans, competition took over as soon as the first vaccines were discovered.

The COVAX agreement was useful to the big capitalist pharmaceutical companies, as it provided for the exchange of scientific data that in turn accelerated the design of vaccines. Gigantic government funding, made with people’s tax money, helped the pharmaceuticals. 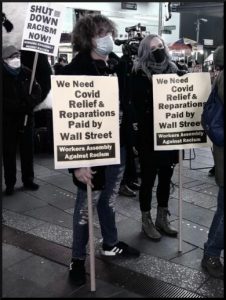 But any agreement or promise of equal treatment became a dead letter once the vaccines became a reality: The usual criterion — business as usual — prevailed. If anyone thought that public funding would defend the public interest, they were quickly disillusioned.

At the same time, the most powerful states are vying for vaccines for a different reason: to ensure economic supremacy over their competitors. Whichever national state is quickest to shake off the pandemic and return to economic “normalcy” can hope to gain decisive advantages.

This is what leads, for example, the U.S., to a veritable hoarding of vaccines to the detriment of the rest of the world — ultimately penalizing poorer countries in particular. Britain has done the same with vaccines produced on its territory, undermining the vaccination plans of the European Union.

The EU’s disregard for Russian and Chinese vaccines is a clear result of a policy aimed at benefiting the pharmaceutical companies of “Western allies.” But even this has not prevented the EU — after having advanced millions of euros to the pharmaceutical companies — from being put on the back burner, trailing the moves of Boris Johnson, Donald Trump and now Joe Biden.

The proven inability of the major pharmaceutical companies to produce the necessary quantity of vaccine should logically lead them to decentralize production to different countries. But working against this good sense solution is the narrow interest of these companies to make as much profit as possible — which happens when they sell finished products and when the products are in short supply.

The health emergency ought to justify the abolition of patents and to encourage large-scale production, free of all fees, by all qualified laboratories in the world. But this does not happen because it clashes, once again, with the private interests of the pharmaceutical giants, centered so far in two countries: the United States and Britain.

The monstrous nature of all this gains even more relevance in the face of data released by the Organization for Economic Cooperation and Development.

In 2020 in the poorest countries, an additional 100 million people were relegated to a situation of extreme poverty. During 2021, the same will happen to another 150 million. Some 270 million people have been pushed to the brink of starvation. (OECD, “Global Crisis, Unequal Problems”)

While in the higher-income countries, social protection measures to cope with the pandemic amounted to $695 per person, in the poorest countries only $4 per capita were allocated.

The rich countries have raised $14 trillion to support their economies, but have refused to forgive the debts of African countries, which amount to $100 billion,, or 1/140th of the former amount.

Inequalities with long-term effects are also accentuated. In poor countries an average of 16 weeks of school was lost, while in rich countries 6 weeks were lost.

Discrimination in vaccine distribution is another aspect of this war. So far, 94% of the vaccines have been delivered to the wealthiest countries (with about 20% of the world’s population), and 10 of those countries received 55%.

The Economist magazine, for its part, confirms these facts and adds some interesting statements. “Vaccine diplomacy” will determine which countries will have access to vaccines in the coming months.

Production represents the biggest obstacle, “as many developed countries have pre-ordered more doses than they need.” The orders under the COVAX agreement will take time to reach poor countries, “especially if delays in the production for and delivery to richer countries push back delivery dates for poorer nations.” (Economist, Jan. 27)

It is impossible to hide these facts: The private interests of the pharmaceutical companies, chasing maximum profit, converges with the interests of the major capitalist powers in managing the course of the pandemic in the interest of achieving hegemony. The imperialist countries are using the vaccine shortage as a weapon to obtain advantages for themselves and in disputes between them. Under no circumstances would world capitalism soften its stance and grant poor countries what it has so far never granted them: debt forgiveness, bailout money or equal treatment — because that is the condition for keeping them dependent.

All the capital that the imperialist world decides to apply in the fight against the pandemic goes through a rigorous profit-and-loss calculation, like any business investment. Whoever dies, dies.

Manuel Raposo is editor of jornalmudardevida.net in Portugal, where this article was published Feb. 14.

U.S. harassment of Russia using Nazis in Ukraine fuels fascism around the world on Stop the Wars At Home and Abroad: https://unac.notowar.net/2021/11/30/u-s-and-their-nazi-puppets-in-ukraine-threaten-war-with-russia

Interesting article posted on Stop the Wars At Home and Abroad: https://unac.notowar.net/2021/11/29/us-business-groups-urge-reducing-tariffs-on-chinese-goods

Corporate greed is the source of new COVID strains while also driving us towards climate catastrophe on Stop the Wars At Home and Abroad: https://unac.notowar.net/2021/11/29/omicron-climate-change-and-socialism

Jordanians who don't want to betray their Palestinian brothers and sisters, feel betrayed by a government that buys into US sponsored business proposals that lead to normalization of relations with Israel on Stop the Wars At Home and Abroad: https://unac.notowar.net/2021/11/29/we-dont-want-to-die-of-thirst-but-we-dont-want-to-betray-normalization-is-a-big-betrayal

Margaret Kimberley reminds us that it's not about the verdict, it's about the system that produces it over and over again on Stop the Wars At Home and Abroad: https://unac.notowar.net/2021/11/29/rittenhouse-and-verdict-mania