During the Obama administration the Modus operandi (MO) was to play magic tricks. Obama would announce a good thing and then at the same time do a really bad thing.  I started urging people to watch both of the magicians hands.

Following Obama’s slight of hand tricks, Biden is off to a similar start. Here are a few examples:

Just yesterday Biden made a foreign policy speech where he said, “America is back. Diplomacy is back at the center of our foreign policy“. But on February 2 Stars & Stripes newspaper reported that his administration was “deploying bombers and airmen to a base in Norway for the first time, underscoring the growing importance of the Arctic region to U.S. defense strategy.” The Air Force has been stepping up its strategic bomber missions in the Arctic, but recent missions have either been staged from England, where bombers typically deploy while training in Europe, or have involved round-trip flights between the U.S. and the Nordic region. This is the first time bombers are deploying to Norway. (Which of course borders Russia in the north.)

In his speech Biden praised those who have been calling for an end to the Saudi-US war in Yemen.  He said the US will end all support for Saudi Arabia’s ‘offensive operations’ in Yemen. But then in typical magician style the new prez stated that the US will “continue to help and support Saudi Arabia” by selling them ‘defensive’ weapons.  Now let’s see here – how much difference is there between offensive and defense weapons?  A bullet is a bullet.  A bomb is a bomb..

On February 3 Biden announced an agreement to extend the New START Treaty with Russia, to preserve the only remaining nuclear arms agreement between them.  OK that is good.  But are you watching his other hand?  On Biden’s first day in office he ordered more US troops into the oil fields of Syria.

On January 28 Biden sent three warships into the Black Sea, stepping up its presence in the region after a drop in overall NATO maritime activity there last year. The destroyer USS Porter began its transit into the sea, joining the USS Donald Cook (built in Bath, Maine) and a third warship conducting operations in the strategic waterway, the Stars & Stripes reported. Retired Lt. Gen. Ben Hodges, who led the Army in Europe until 2018, said more allies should step up to help the U.S. in the region. “We clearly have to increase the priority of the Black Sea,” said Hodges, who is now the Pershing chair of strategic studies at the Center for European Policy Analysis. “US Navy has too many (requirements) and not enough resources. President Biden will expect Allies to do more.” Russia took note of the US’s Black Sea escalation and sent fighter jets zooming just above Washington’s provocative deployment of destroyers in Russia’s backyard.  How would the US respond if Moscow sent warships into the Gulf of Mexico? 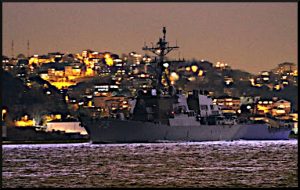 Let’s not leave China out.  Again on January 28 Biden ordered a ‘task force’ of four B-52 bombers to fly to Andersen Air Force Base, Guam, part of an ongoing demonstration by the Air Force of its ability to move strategic assets around the globe. Stars & Stripes again reported that the B-52s, from Barksdale Air Force Base, Louisiana, were sent to “reinforce the rules-based international order in the Indo-Pacific region” through “strategic deterrence.” Guam, at the eastern edge of the Philippine Sea, is within easy range of the South China Sea, where the US is escalating pressure on China to surrender to Washington’s control.

All of these ‘operations’ cost big $$$$ – especially at a time when the US Congress says that the government can’t afford to give our citizens $2,000 each to help them deal with loss of jobs, no healthcare, growing hunger and poverty, and general economic collapse. But despite all the nice talk about bringing the nation back to sanity and solvency – it is the same old ‘double cross’ – Three-card Monte scam.  Watch both hands of the dealer.  Look away at your own risk.