The web magazine lapluma.net published this article by its author, a Venezuelan analyst, on Sept. 3. The article refers to George Orwell’s novel,“Animal Farm,” which pro-imperialist intellectuals have used for reactionary purposes in the past. In this case the author highlights the role of Latin American bourgeois leaders who have served Washington while in office and now complain about Washington’s attempt to seize direct imperialist control of international agencies. U.S. imperialism had used these agencies for indirect control of the Western Hemisphere. Now Trump has appointed a rabid anti-Cuban from his White House to head the Inter-American Development Bank. Translation by Workers World managing editor John Catalinotto.

In his eagerness to destroy the multilateral system, Donald Trump goes beyond the control of those institutions created by the United States to maintain its imperial domination. This is particularly evident in Latin America and the Caribbean where, not content with all the excesses that such institutions enact with the support of the hegemonic power, he arms and disarms them at will.

The most palpable case was when, confronted with the impotence and failure of the OAS in its attempt to overthrow the government of Venezuela, [Washington] called its cronies together to the Peruvian capital [Lima], where they grabbed the baton to try to achieve what the OAS had failed to do. In the end, it all ended in one more farce presided over by the CIA director, who now serves as secretary of state [Mike Pompeo].

It has become more evident than ever that U.S. foreign policy cannot be advanced through diplomatic channels that normally use negotiation and dialogue. Its will can only be imposed through domination, force, threats and extortion. Of course, in Latin America and the Caribbean this approach has succeeded because the right-wing elites there freely submit to threats and extortion and to accepting force regardless of their national interests and sovereignty — if this submission is necessary to defend their own narrow interests.

But now the imperial lust for domination goes much deeper. It has shifted to subjugating its own cronies, who emit weak whines of complaint that only serve to express the collapse of the Pan American and imperialist system. The imperialist master’s own action affirmed this, as soon as it verified the uselessness of structures it set up originally to sustain its neocolonial rule, by making obscure and self-serving use of international law.

A scenario portraying these agents’ rebellion is developing in the Inter-American Development Bank (IDB).

Trump decided to violate a verbal agreement by which the president of that organization would always be a Latin American. Since the IDB’s foundation, this agreement had allowed the financial entity to maintain its façade as an autonomous institution.

However, the U.S. president has now decided to impose his own candidate. The nominee is Mauricio Claver-Carone, a disciple of Senator Marco Rubio, who had already been placed in the White House as one of the members of the Cuban-American terrorist ultra-right in Trump’s government.

In this case he occupies the position of Special Assistant to the President and Director of Western Hemisphere Affairs of the U.S. National Security Council, which directs all the anti-Cuban and anti-Venezuelan fury of the U.S. state apparatus. In return, Rubio must provide Florida’s votes for Trump’s reelection.

This decision landed like a bomb in Washington’s subject countries of Latin America and the Caribbean. The truth is that Trump has violated no written law, but only a verbal agreement made nearly 60 years ago. However, even a group of former Latin American presidents, who during their time in office upheld their country’s perennial subordination to the United States, claim now that Trump’s decision is “a very serious violation of the fundamental political agreement with which [the IDB] was born.”

In a letter made public on Aug. 26, Fernando Henrique Cardoso [Brazil], Felipe González [Spain], Ricardo Lagos [Chile], Julio María Sanguinetti [Uruguay], Juan Manuel Santos [Colombia], and Ernesto Zedillo [Mexico] expressed their opinion that such an act “breaks the logic and wisdom of that foundational political agreement.” They claim that there has been no discussion on the subject, describe the measure as a “major break” and ask for more reflection “because that nomination constitutes a serious lack of respect for the rules of hemispheric and international coexistence and is certainly a serious attack on Latin American dignity.”

The former presidents recognize that the United States has the votes of Brazil, Colombia and [Venezuela’s Juan] Guaidó (whom the IDB has transformed into a country) and that it would be enough to add “one or two additional countries” for the Trump candidate to achieve his “reprehensible purpose.”

In this unusual statement, sounding like children who cry when someone takes their toys away from them, these ex-presidents − who while they held the presidency of their countries never made any statement in defense of respect for the dignity of the peoples of our region and in rejection of the permanent aggression of the United States against Latin America − now, when they have no power whatsoever, warn that: “Because of its form and substance, this would be an arbitrary imposition, which we have no doubt would have very negative consequences for the future of the institution and the future of the relationship between the United States and Latin America. The damage to the IDB would be irreparable.”

Finally, they assured that the election of the next president of the IDB, scheduled for this September, lacks legitimacy and should be considered null and void. They therefore call on the member countries of the IDB to realize that the new president of the organization would be appointed by an “act lacking historical and political legitimacy.”

The problem is that Claver-Carone says he already has the 15 votes needed for his election, including those of some of the countries from which these former presidents come. Their current rulers have preferred to opt for their loyalty to the imperial master to the detriment of the defense of the national interests that their retired colleagues claim to represent.

In another area, also within the Pan American system — this time using the Uruguayan Luis Almagro – the United States has decided to to intervene in the Inter-American Commission on Human Rights (IACHR). 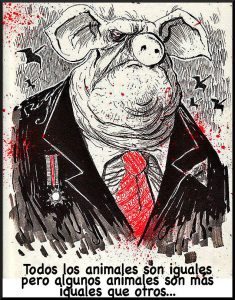 At the request of Argentina (during Mauricio Macri’s presidency), Colombia, Paraguay, Brazil and Chile disapproved of the fact that the head of this body [Paulo Abrão] exceeded his functions, [which are normally] to persecute governments fought by the United States. Instead, he ordered the  to investigate those countries who have imperial backing to commit all kinds of human rights abuses.

These countries want to assert their autonomy as nations above the IACHR, which was generating an insubordination that Washington didn’t want and cannot accept because it risked the collapse of the imperial system. At the same time, a contradiction emerged from the fact that these countries are loyal supporters of U.S. foreign policy.

In spite of having been unanimously elected to a new term as the general secretary of the IACHR, the Brazilian Paulo Abrão has been dismissed by Almagro. The OAS secretary general’s illegal decision to dismiss, taken without consultation, was made under the pretext that there are administrative complaints against Abrão. As is usual when one has the backing of Washington, Almagro presented no evidence. Nor did it matter that the IACHR should be autonomous in the appointment of its leaders.

Using a convoluted method based on allegations presented by the Colombian Neida Pérez, whom Almagro appointed as “ombudsman” in order to have another instrument to attack Venezuela, the secretary general extended Pérez’s mediation functions to include investigative tasks that she does not have and which are illegal.

For his part, in an interview with University of Chile Radio, the Mexican commissioner of the IACHR, Joel Hernández, said that Almagro’s decision leaves this institution “without options” and in a situation “that seems to be one of no return.”

The IACHR situation is another expression of the crisis affecting the Pan-American system stemming from the Monroe Doctrine [that declares the U.S. is the deciding country in the Western Hemisphere]. Almagro’s decision generates a great contradiction because, on the one hand, it ignores the legal fact that this body is autonomous from the OAS, while on the other hand, it highlights its de facto subordination to the State Department, like all regional bodies that were born under the anti-communist influence of the years of [U.S.-USSR] bipolarity after World War II.

Hernández affirms that Almagro’s decision is unprecedented and would break a tradition of more than 20 years in which “the Commission elects and the OAS designates,” which means nothing to Almagro in his desire to exhibit his servile disposition to Washington.

According to the award-winning Colombian journalist Gonzalo Guillén, in an article published in the newspaper “La Nueva Prensa” of Bogotá last Aug. 31, Almagro’s performance is based on his corrupt character that led him to pay an “unseemly price” to obtain all the votes he needed to be re-elected as secretary general of the OAS.

The journalist Guillén writes that in addition to the perks of the secretary general position, Almagro needs to hold on to it because he is politically dead in his country Uruguay, since the left considers him a traitor and the right has no confidence in him.

It is in this context that − according to Guillén’s reasoning – Almagro received the support of some countries which in return asked for Abrão’s head. Guillén also asserts that one of those countries is Colombia “through its questioned ambassador to the OAS, the obscure former prosecutor Alejandro Ordóñez (who is a neo-Nazi − misogynist, racist, corrupt, and homophobic).”

Recalling George Orwell’s novel that gives the title to this article, it seems that the measures implemented by Trump in his “back yard” have gone so far that they have generated a “rebellion on the farm” in which animals fight to obtain what they believe is a better government that is not very different from the one that exists. As in the novel, groups and factions deep into corruption, petty interests, and the pursuit of profit compete for the construction of a new form of power and domination that could be worse than the one before it.

As in Orwell’s novel, one could say that “Napoleon” Trump is unleashing his dogs at all the Latin American “Snowballs” who are horrified at the prospect of having to flee the farm. Napoleon, the head of the pigs that took over, is becoming the sole leader, ignoring the other pigs of the Lima Group that have accompanied him until now, and that like the men displaced from the farm, may be victims of the dogs called Pompeo, Almagro, Rubio and others. The fear of these pigs − who, when in power, behaved just like Napoleon − is that the facts indicate that they could also be devoured by the dogs unleashed by the leader while pursuing his goals.