The Trump administration is hostile to any agreement that restricts its abilities to build, test and deploy nuclear weapons.

It left the Intermediate-Range Nuclear Forces (INF) agreement which limited nuclear missile deployments in Europe. It did so after accusing Russia of deploying missiles that exceed the range the INF treaty allowed. It has never shown evidence that the assertion was true.

Recently the administration announced that it will leave the Treaty on Open Skies which allowed for mutual reconnaissance flights for its 34 country members. It accused Russia of having limited U.S. requests for such flights over certain Russian areas. The Russian government rejected those claims.

The Trump administration is intentionally running out of time to renew the New START Treaty which limits the strategic nuclear platforms deployed by the U.S. and Russia. The treaty will expire on February 5 2021. Russia has offered to renew it for five years without any conditions. The U.S. rejected that. It says that China must be integrated into the treaty even as that makes no sense at all.

On top of all that Trump is now thinking about breaking the Comprehensive Nuclear-Test-Ban Treaty which the U.S. has signed but not ratified:

The Trump administration has discussed whether to conduct the first U.S. nuclear test explosion since 1992 in a move that would have far-reaching consequences for relations with other nuclear powers and reverse a decades-long moratorium on such actions, said a senior administration official and two former officials familiar with the deliberations.The matter came up at a meeting of senior officials representing the top national security agencies May 15, following accusations from administration officials that Russia and China are conducting low-yield nuclear tests — an assertion that has not been substantiated by publicly available evidence and that both countries have denied.

The claims that Russia and China conducted low yield testing is almost certainly false and only an excuse to avoid the ratification of the test ban treaty.

The big joke though is that the the administration claims that it may need to again test nuclear devices to help with the renewing of the New START Treaty:

A senior administration official, who like others spoke on the condition of anonymity to describe the sensitive nuclear discussions, said that demonstrating to Moscow and Beijing that the United States could “rapid test” could prove useful from a negotiating standpoint as Washington seeks a trilateral deal to regulate the arsenals of the biggest nuclear powers.

There will be no ‘trilateral deal’. The U.S. claims it wants to renew the New START Treaty by including China. But China has absolutely no reason to enter such an agreement. This graphic by the Arms Control Association explains why: 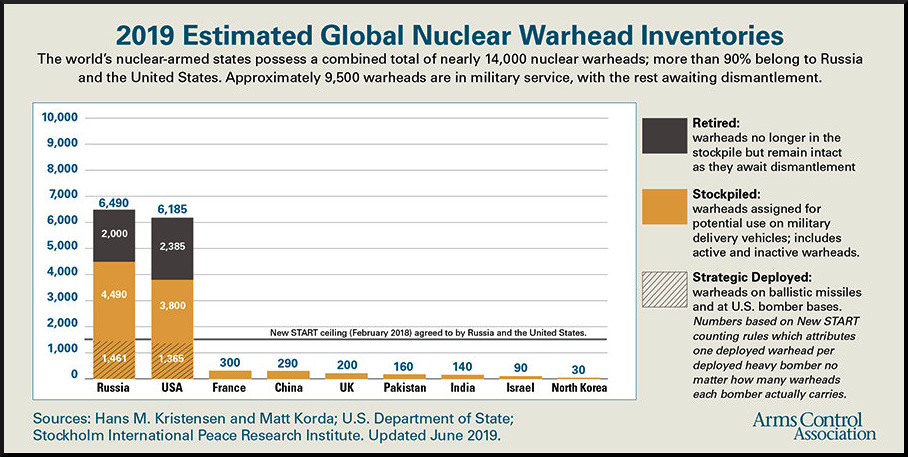 Russia and the U.S. both have some 6,000+ nuclear warheads. The New START Treaty between the U.S. and Russia  limits the numbers of platforms – missiles, bombers and submarines – that each side can use to launch strategic nuclear weapons to some 1,400. China has less than 300 nuclear warheads and even fewer platforms from which those could be launched. The U.S. claims that China will double the number of its warheads and platforms during the next ten years but there is again zero evidence to support that claim.

Why should China, with less nuclear capabilities than France and Britain, join a treaty that would limit is meager capabilities when the U.S. and Russia both have more than twenty times its numbers. That makes no sense at all.

It is obvious that the Trump administration is simply using the China card as an excuse to let the New START Treaty run out.

The administrations real hope may be to restart a nuclear arms race. That is how I interpret this circular argument:

U.S. President Donald Trump’s arms control negotiator on Thursday said the United States is prepared to spend Russia and China “into oblivion” in order to win a new nuclear arms race.“The president has made clear that we have a tried and true practice here. We know how to win these races and we know how to spend the adversary into oblivion. If we have to, we will, but we sure would like to avoid it,” Special Presidential Envoy Marshall Billingslea said in an online presentation to a Washington think tank.

The ‘threat’ of a new nuclear arms race is made to press Russia to bring China on board of a renewed New Start Treaty:

Marshall Billingslea, who was appointed last month as the president’s special envoy for arms control, said Thursday that he had his first secure phone call with his counterpart in Moscow, Russian Deputy Foreign Minister Sergei Ryabkov. Billingslea said they agreed to meet, talk about their objectives and find a way to begin negotiations.“Suffice to say, this won’t be easy. It is new,” Billingslea said, adding that the U.S. fully expects Russia to help bring China to the table.
…
A spokesman for the Chinese Foreign Ministry, Geng Shuang, said in January that China has “no intention to participate” in trilateral arms control negotiations. Billingslea, however, is optimistic that Beijing will want to joint in and be seen as a world power.

Russia would never “bring China to the table” even if it could. The U.S. and Russia are first class superpowers. China isn’t there yet.

Billingslea’s threat of a new arms race is not credible. Russia has already preempted such a race by introducing a generation of completely new weapons which the U.S. can not counter at all. Trump’s relaunch of Reagan’s Star Wars will not change that.

Russia will not take part in a new arms race as it already has everything it needs to respond to a U.S. first strike with a counterstrike that is guaranteed to destroy the United States. This capability is independent from the number of nuclear warheads and launchers the U.S. deploys.

China did not take part in the Cold War arms race. It always believed that it had sufficient capabilities to threaten the U.S. with a counterstrike no matter what. That attitude can be discerned from this vignette:

Slightly over a decade ago at a U.S.-Chinese “Track II” meeting in Beijing, American participants were reported to have pressed their Chinese counterparts about the limits of China’s nuclear no-first-use (NFU) commitment. One of them raised the possibility of U.S. conventional strikes against Chinese nuclear forces: what would happen then? Would China adhere to NFU in the strictest sense, or would it use its remaining nuclear weapons to retaliate against a conventional counterforce attack? One of the Chinese participants, a retired senior military official, is said to have responded, “Try it and see.”

There is no sign that China’s thinking has changed.

“Spending the adversary into oblivion“, as Billingslea’s threatened, is also rumored to have a certain cost. It is quite doubtful that the U.S. is capable or willing to finance that.

Billingslea is by the way a dangerous nutter. During the Bush administration he was Principal Deputy Assistant Secretary of Defense for Special Operations and Low Intensity Conflict and the civilian responsible for the war on terror and torture regime conducted by U.S. special operation forces.

If he believes that torture can help to fight terrorism, or that nuclear tests can further arms control negotiations, he might also believe that unrealistic threats of an arms race can push China into a treaty it does not want. In reality neither will work.

But that may well fit Trump’s plans of pushing all arms control regimes into oblivion.

Retreating from arms control regimes has already a high a price even when no new weapons are bought. With each step the administration has taken in this regard it has won no new capabilities but lost insight into the capabilities of its presumed enemies. The INF, New Start, Test Ban and the Open Skies Treaty all had verification instruments and inspection regimes that allowed all sides to gain insight into the others capabilities and thinking.

In a few years the U.S. will have lost a lot of insight into Russia’s weapons and thinking. The insecurity created by that may well come back to haunt it.