In the wave of coverage and talking heads that is sure to follow Tuesday morning’s press conference on a Middle East peace plan, I can already hear the comments from the “Left” contrasting Trump’s embrace of Netanyahu with the criticism Obama allowed during his final days in office, most notably Kerry’s speech warning of the end of two-state viability.

Let’s be clear: announcing the death of the two-state solution in 2016 or today is akin to calling time of death long after a funeral.

The debate, the conversation, the driving force for peace and justice in Israel-Palestine cannot be about salvaging a territory of fragmented Bantustans, pieced together with a highway and tunnel. 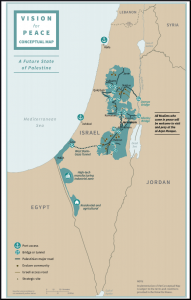 The map released by the White House this morning, without consulting the Palestinians in any capacity, reflects the same governance plan that has been in effect since 1967: one geographic entity with every border controlled by the Israeli military, a continued denial of the refugee right of return, and an illegal occupation of Jerusalem and the Syrian Golan Heights.

A couple of years ago, a colleague and I were asked to give a talk to our department on President Trump’s potential effect on U.S. relations vis-a-vis Israel-Palestine. Though our presentation addressed the shifting landscape of the right wing in Israel, we – along with others at the time – largely focused on the continuity of U.S. policy and felt compelled to remind our peers of the severe lack of change from one president to the next. We did not do this to downplay the dangerous steps being taken toward entrenching a violent military occupation, but to remind the room that Trump did not get here on his own.

This reminder is as vital today as ever.

The content of the proposed “peace plan” is not a break from the past, nor is it a vision for a brighter future. It is another example of continuity in an Israeli policy of dispossession, displacement, and concentration of Palestinians and a reminder of the fraudulent notion that the United States has ever been an “honest broker” for a just resolution in the region.

Do not let the idea of continuity fool or lull you into believing that this proposal is inconsequential, though.

Netanyahu initially scheduled a cabinet vote for this Sunday to annex thirty percent of the occupied West Bank.

What we witnessed on Tuesday morning’s press conference was a stamp of approval for unilateral annexation and apartheid writ large.

As a geographer, I know and believe more than most in the power of maps. The Jerusalem Post correctly noted that this plan, unlike its predecessors came with one.

Maps portray a set of geographical imaginaries and intention. They can evoke as strong of a sense of affinity and belonging as they can of pain and disavowal. As children, we are taught to find ourselves on maps, to tie our identities to place and expect these places to affirm our presence in them. Maps have rarely included Palestinians – or other indigenous peoples the world over – let alone affirmed their history or continued existence.

There are almost seven million Palestinians living under Israeli control and another seven million refugees around the world. For the last seventy-two years, border upon border has been imposed upon them without consent or regard for their right to have a voice in their own future.

Ironically, despite today’s efforts to do this once again, to map and confine, Trump’s plan highlights just how unwilling Israel is to acknowledge the rights of Palestinians living within their historic borders.

As you read and listen to analysis of this plan, ask yourself who is speaking and who is missing from the conversation. What does it mean that an impeached president and a prime minister indicted for corruption are writing a vision for peace?

As you examine images of territory and roads, imagine instead neighborhood after neighborhood, family after family separated.

As you hear about offers and rejections, question instead the premise that the United States has a legal or moral authority to offer Palestinians a set of borders.

Featured Image: Palestinians watch the televised press conference of President Donald Trump and Israeli Prime Minister Benjamin Netanyahu in Khan Yunis in the southern of Gaza Strip on January 28, 2020. Donald Trump announced his ultimate deal for Middle East peace, saying his plan would be a realistic two-state solution that had already been agreed to by Israel. (Photo: Ashraf Amra/APA Images

This article was originally published by the Fletcher Forum of World Affairs on January 29, 2020, and republished with permission on Mondoweiss.

Nour Joudah is a PhD candidate in Geography at UCLA and currently working on a dissertation examining indigenous counter-mapping and decolonization in former and current settler colonies, namely Algeria, Palestine and Hawaii. She has an MA in Arab Studies from Georgetown University.