The Plowshares 7 are a group of peace activists have been jailed since April 4, 2018 for civil resistance to the US Nuclear Weapons program.   They entered the Kings Bay Naval Submarine Base in Georgia  to protest U.S. nuclear weapons on April 4, 2018,  the 50th anniversary of Martin Luther King’s assassination. Armed with hammers, crime scene tape and baby bottles containing their own blood, seven anti-nuclear they entered Kings Bay—one of the largest nuclear submarine bases in the world—during the night to  symbolically disarm the six nuclear ballistic missile submarines kept there. Each submarine carries 20 Trident thermonuclear weapons.  Theirs is a fascinating story, the story of a bold well planned action that actually met with little resistance from base security while in progress.   They have done a great favor to reveal the weapons that are at Kings Bay, and to show those responsible how poor the security around these devastating weapons was. ~UNAC Editor

BRUNSWICK, GA – The Kings Bay Plowshares 7 long-awaited trial begins on with jury selection at 9 am tomorrow, more than a year and a half after their symbolic disarmament action at the Kings Bay nuclear submarine base in nearby St. Mary’s.  They acted on the 50th anniversary of the assassination of the Rev. Dr. Martin Luther King Jr.

Friday night, October 18, at 10 pm, Judge Lisa Godbey Wood sent her final ruling on what testimony the defendants will be allowed to present at trial this coming Monday. The judge’s ruling had been expected after a hearing on Wednesday,

Expert witnesses for a necessity defense including Daniel Ellsberg and Prof. Frances Boyle and Prof. Jeannine Hill-Fletcher and Mississippi Catholic Bishop Joseph Kopacz for a religious freedom defense have been excluded. However, the deadly nature of nuclear weapons, the meaning of religious symbols and the defendants’ motivations will be allowed only brief mention during testimony and cross-examination.

Defendants have been threatened with a mistrial, contempt of court rulings, and severance from the unified trial if they disobey the guidelines.

“We have seen courts exclude information from jurors. The defendants have not been allowed to present their motivation for acting to uncover the nuclear threat in 100 Plowshares actions since 1980,” said Laurie DeFlaun of Ithaca, NY responding to the court decision. She is the wife of John Grady of the Plowshares Number Four.

“An action which would under other circumstances be illegal can be justified as legal by a reasonable belief that it is necessary to avert a much greater evil, in this case omnicide, the killing of nearly every human on Earth, in a war in which the nuclear missiles aboard Trident submarines were launched.”

For two years the seven defendants studied Ellsberg’s The Doomsday Machine: Confessions of a Nuclear Planner in preparation for their action. Ellsberg, a former National Security Council member, has unique insider knowledge as author of US nuclear policy and knew of the dozens of times nuclear weapons use was averted within minutes.

“Today’s nuclear weapons establishments as well as the entire system of nuclear deterrence/terrorism currently practiced by all the nuclear-weapon states are criminal — not simply illegal, not simply immoral, but criminal under well-established principles of international law…. All human beings possess the basic right under international law to engage in non-violent civil resistance activities for the purpose of preventing, impeding, or terminating the ongoing commission of these international crimes.”

At the Justice Department in Washington on Thursday, supporters delivered to Attorney General William Barr thousands of signatures on a global petition for the dismissal of the charges. Nobel laureates, including Archbishop Desmond Tutu, Mairead McGuire, Beatrice Fihn, and more than 100 other distinguished signers such as Martin Sheen, Oscar Lopez Rivera,  Angela Davis, and Fr. James Martin joined more than 6,000 signers. 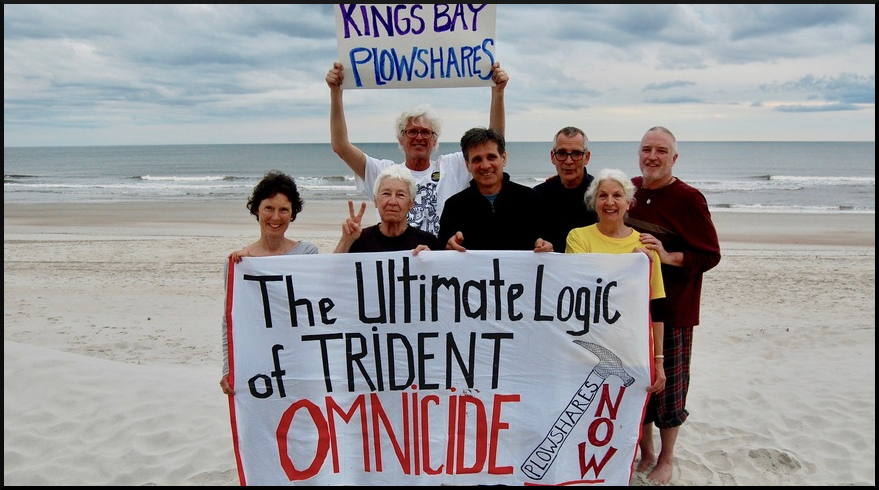 They face more than 20 years in prison.

There is an excellent interview with some of the Plowshares 7 on Democracy Now! and David Swanson interviewed them on Talk Nation Radio on October 20th.