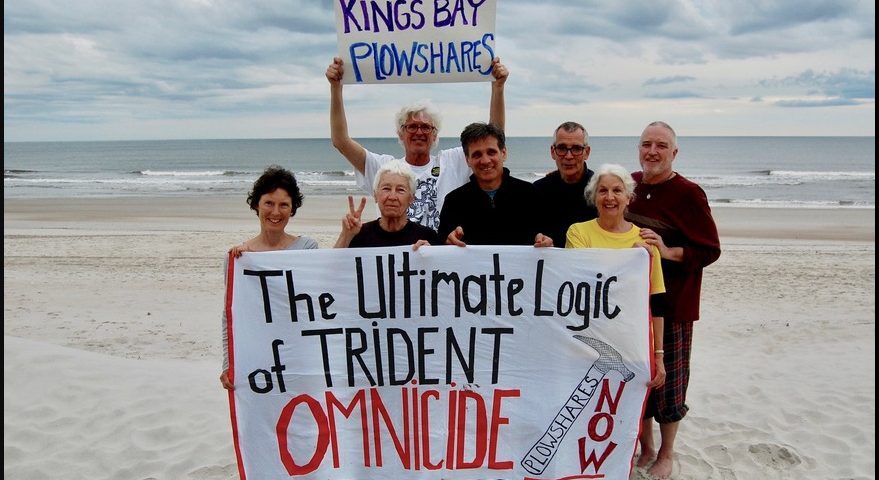 The seven chose to act on the 50th anniversary of the assassination of the Rev. Dr. Martin Luther King, Jr., who devoted his life to addressing what he called the “triple evils of militarism, racism, and materialism.”  Carrying hammers and baby bottles of their own blood, the seven attempted to convert weapons of mass destruction.  They hoped to call attention to the ways in which nuclear weapons kill every day, by their mere existence and maintenance.

Kings Bay Naval base opened in 1979 as the Navy’s Atlantic Ocean Trident port.  It is the largest nuclear submarine base in the world.  There are six ballistic missile subs and two guided missile subs based at Kings Bay.

The activists went to three sites on the base: The SWFLANT administration building, the D5 Missile monument installation and the nuclear weapons storage bunkers.  The activists used crime scene tape, hammers and hung banners reading:

“The ultimate logic of Trident is omnicide”

They also brought an indictment charging the U.S. government for crimes against peace.

The activists at the nuclear weapons storage bunkers were Elizabeth McAlister, 78, of Jonah House, Baltimore; Fr. Steve Kelly SJ, 69, of the Bay Area, California; and Carmen Trotta, 55, of the New York Catholic Worker.

At the Strategic Weapons Facility Atlantic Administration building were Clare Grady, 59, of the Ithaca Catholic Worker; and Martha Hennessy, 62, of the New York Catholic Worker.

This is the latest of 100 similar actions around the world beginning in 1980 in King of Prussia, Pennsylvania.

On August 26, 509 days after their arrest, a federal judge denied all the pre-trial motions by the our friends. Today, the judge set their trial date: Monday, October 21, 2019 with jury selection beginning at 9 a.m.

The Plowshares had urged U.S. District Judge Lisa Godbey Wood to dismiss their charges for numerous legal reasons as well as the fact that the hundreds of first strike nuclear weapons on the submarines based at Kings Bay Naval Base are illegal and immoral.

The judge found the Plowshares did establish a prima facie case under the Religious Freedom Restoration Act because they were sincerely religiously motivated to challenge the nuclear weapons at the Naval Base. Wood also found that the government’s actions substantially burdened their right to exercise their religious beliefs. However, the judge went on to rule that the government had a compelling interest in keeping unauthorized people out of the base and the prosecution of the Plowshares activists was the least restrictive means of protecting the safety of the base.

The Plowshares argued that the government bringing multiple duplicative charges threatening 25 years is far from the least restrictive option to keep unauthorized people out of the base. On April 4, 2018 the seven activists entered the naval base in St. Mary’s, GA. They undertook various nonviolent actions such as pouring blood, hammering on a statue of a Trident II D5 missile, and placing crime scene tape in front of the entrance to a headquarters building.

“We took these actions to say the violence stops here, the perpetual war stops here – at Kings Bay, and all the despair it represents,”

said Clare Grady, one of the Kings Bay activists.

“We took these actions grounded in faith and the belief that Jesus meant what He said when He said, ‘Love your enemies,’ and in so doing offers us our only option for hope.”

The judge’s 19-page opinion denying the motions will be posted at the website of the Kings Bay Plowshares 7 along with other breaking news about their legal battle.

You can sign the petition urging the court to dismiss all charges at:
https://actionnetwork.org/petitions/sign-global-petition-to-dismiss-charges-against-anti-nuclear-plowshares-activists-facing-25-years

This is the country the #USA gives military support to while criticizing Cuba, Venezuela and others. You can loose your head in Saudi Arabia for criticizing the government. US, Saudi Arabia out of #yemen.

Scheduled for 6 a.m. EST at the Maher Terminal in Elizabeth, New Jersey, the activists are set to block the ship ZIM Qingdao, operated by the Israeli international shipping company ZIM, from unloading. #BlockTheBoat http://bit.ly/3iIwtcw

We must all support this great athlete. #FreePalestine
https://www.facebook.com/groups/unac1/permalink/4478512285533904/?sfnsn=scwspmo

The dark underbelly of Imperial wars on Stop the Wars At Home and Abroad: https://unac.notowar.net/2021/07/24/how-the-cia-turned-afghanistan-into-a-failed-narco-state

Michael Wong of Veterans for Peace on US fears of China, and how alienation breeds defensive action on Stop the Wars At Home and Abroad: https://unac.notowar.net/2021/07/24/the-china-fear-factor

US Destabilization Campaign in Cuba on Stop the Wars At Home and Abroad: https://unac.notowar.net/2021/07/22/the-hidden-hand-of-the-us-blockade-sparks-cuba-protests