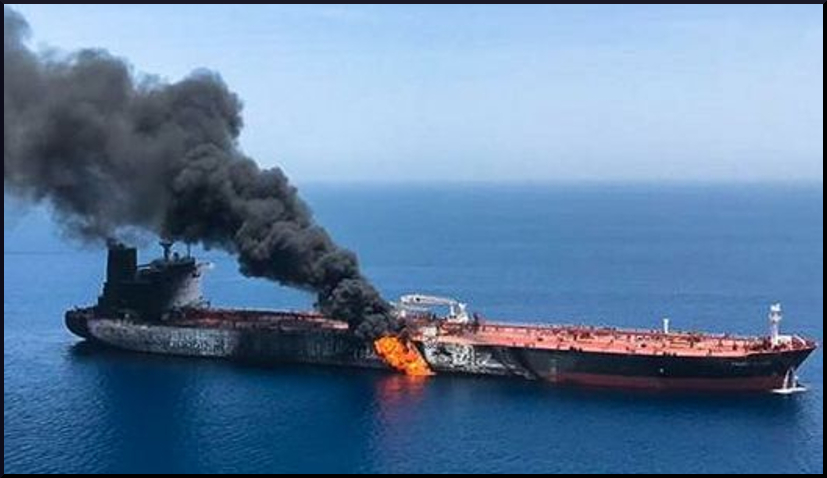 The Trump administration’s thuggish secretary of state, Mike Pompeo, made a presentation to the media Thursday afternoon in which he asserted that Iran was responsible for suspected attacks on two oil tankers in the Gulf of Oman near the strategic Strait of Hormuz.

These charges carry with them the threat of a war that would transform much of the Eurasian landmass into a battleground.

The allegations made by Pompeo, who publicly professes that his every action is guided by the Bible, are a pack of lies.

“It is the assessment of the United States government that the Islamic Republic of Iran is responsible for the attacks that occurred in the Gulf of Oman today,”

Pompeo told reporters during his brief remarks at the State Department.

“This assessment is based on intelligence, the weapons used, the level of expertise needed to execute the operation, recent similar Iranian attacks on shipping, and the fact that no proxy group operating in the area has the resources and proficiency to act with such a high degree of sophistication,” the secretary of state continued.

The assessment is “based on intelligence,” but no intelligence has been provided to anyone. It is derived from the “weapons used,” but the guilty verdict has been delivered against Iran before any investigation has been conducted to determine what those weapons were. And it is buttressed by allegations of “recent similar Iranian attacks on shipping” which are just as unsubstantiated as the latest ones.

Larding up his indictment, Pompeo provided a list of alleged Iranian transgressions over the last month including the sabotage of four ships anchored off the UAE port of Fujairah last month—an accusation that US National Security Adviser John Bolton vowed to substantiate by presenting evidence to the United Nations Security Council, but then never did.

He cited the attack by armed drones on Saudi oil pipelines, for which Yemen’s Houthi rebels claimed responsibility as retaliation for the near-genocidal, four-year-old Saudi-led and US-backed war that has killed over 80,000 Yemeni civilians and brought millions to the brink of starvation.

Pompeo also included in his bill of charges a missile that fell on May 19 into Baghdad’s Green Zone, about a third of a mile away from the US embassy, and a May 31 car bomb that wounded four US soldiers in Afghanistan, for which the Taliban claimed responsibility.

What are the known facts? Two tankers suffered damage some 14 nautical miles from the Iranian coast after taking on cargoes in ports in Saudi Arabia and the United Arab Emirates. The Front Altair, a Norwegian-owned, Marshal Islands-flagged vessel, was carrying petrochemical feedstock. Following an explosion, the tanker caught fire.

The second tanker, the Japanese-owned, Panama-flagged Kokuka Courageous, carrying a cargo of methanol, suffered damage to its hull’s starboard side.

The 44 crew members of the two vessels were rescued by the Iranian navy and taken to the nearby Iranian port of Bandar-e-Jask.

After the rescue, the US Fifth Fleet announced that “US Navy ships are in the area and are rendering assistance.” What precise “assistance” was being rendered is unclear, but there is no doubt that the incident will be exploited by the Pentagon to ratchet up its escalating military threats against Iran.

Representative of the shipping companies connected to the two tankers variously suggested that the ships had been attacked with torpedoes, magnetic mines or improvised explosive devices, the last being suggested because of the limited character of the damage. So much for Pompeo’s reliance on the “weapons used” to indict Iran.

Finally, and perhaps what is most significant, is that both vessels, one by ownership and the other by the manifest for its cargo, were connected to Japan and were struck precisely on the day that Japanese Prime Minister Shinzo Abe was meeting Iran’s Supreme Leader Ayatollah Khamenei. The trip had been billed as an attempt to ease tensions between Washington and Tehran and was seen by Iran as a means of mitigating the isolation that US imperialism has attempted to impose upon Iran and its economy.

Just hours before the attacks, Abe had publicly declared that, contrary to US accusations, Iran had “no intentions” to build a nuclear weapon. Whose interests were served by attacking tankers connected to Japan in the middle of such meetings? Certainly not those of the Iranian government.

Moreover, if Pompeo’s claims had any credibility, and Iran had just flagrantly attacked a Japanese shipping vessel, wouldn’t one expect Abe to immediately cut short his trip?

Thursday’s incident in the Gulf of Oman is eerily reminiscent of the television show Rubicon, which was canceled by AMC after one season in 2010. In the final episodes of the show, forces connected to the US intelligence apparatus stage the sinking of an oil tanker in the Gulf of Mexico and attempt to blame Iran.

Pompeo cited the remark, declaring, threateningly, “Zarif may think this is funny, but no one else in the world does.”

No one in Tehran was laughing. What the Iranian foreign minister was suggesting was the obvious conclusion that those responsible for the attacks on the tankers were those who wanted to prevent an easing of tensions in the region and, rather, to escalate the war threats against Iran.

The obvious suspects are Washington itself and the collection of Middle East regimes that it has sought to forge into an anti-Iranian axis: principally Israel, Saudi Arabia and the United Arab Emirates. Any one of them—or at least the mercenaries that the House of Saud and its fellow oil sheikdoms employ—are entirely capable of carrying out such an attack with the aim of blaming it upon Iran.

In his brief remarks Thursday, Pompeo accused Iran of carrying out

“40 years of unprovoked aggression against freedom-loving nations” and declared that “Iran is lashing out because the regime wants our successful maximum pressure campaign lifted.”

Here stands before you in all his glory is the Evangelical Christian hypocrite, who embodies the criminality of US imperialism.

Forty years of “unprovoked aggression” by Iran. Who does he think he is kidding? Washington has never forgiven the Iranian people for overthrowing the US-backed police state torture regime of the Shah in 1979. It was Washington that goaded the Iraqi regime of Saddam Hussein to invade Iran and provide it with chemical weapons to slaughter Iranian troops in a war that claimed a million lives.

Toward the conclusion of that war in 1988, the USS Vincennes, a US Navy cruiser deployed in the Persian Gulf, fired surface-to-air missiles into an Iranian passenger jet, killing all 290 people aboard.

Today, Washington, having unilaterally and illegally ripped up the Iranian nuclear agreement, is imposing sanctions tantamount to a state of war that are creating increasing misery for Iran’s 83 million people, destroying their jobs, subjecting millions to poverty and hunger, and depriving the sick of life-saving medicines.

One thing is certain. Nothing coming out of the mouth of Pompeo or anyone else in the US government—its Republican and Democratic representatives alike—or from its propaganda servants in the corporate media, regarding the crisis in the Persian Gulf can be believed. The pretexts for war this time around will prove as fabricated as Iraq’s “weapons of mass destruction” or the lies about a US warship being attacked in the Gulf of Tonkin that were used to justify the US war that killed over three and a half million people in Indochina.

Working people in the United States and internationally must take the provocations in the Persian Gulf as a deadly serious warning. Having deployed its aircraft carrier battle group, its B-52-led bomber strike force, amphibious assault ships, Patriot missile batteries and ground troops to the region, Washington is seeking to provoke a war.

Such a war, waged by a US military that is unprepared for a conflict on the scale posed by Iran, would spell a catastrophe both internationally and domestically. It could not be waged without the restoration of the draft and the provoking of social conflicts of a revolutionary character within the US itself.

A war against Iran will far eclipse the bloodbath that claimed over a million lives in Iraq and will inevitably draw in the entire Middle East, as well as US imperialism’s “great power” rivals, including both China and Russia, posing the threat of a nuclear Armageddon.

The drive to war against Iran and the threat of a world war are being prosecuted largely behind the backs of the American people, which are broadly opposed to war and deeply skeptical of the lies of the US government and its media servants.

The decisive question today is the mobilization of the mass opposition to war in a conscious and independent political intervention by the working class internationally to put an end to imperialism and reorganize society on socialist foundations.

Bill Van Auken is a full-time reporter for the World Socialist Web Site, and resides in New York City.   Van Auken is a politician and activist for the Socialist Equality Party and was a presidential candidate in the U.S. presidential election of 2004, announcing his candidacy on January 27, 2004.

* Featured Image: Fire and smoke billowing from Norwegian-owned Front Altair tanker said to have been attacked in the waters of the Gulf of Oman on June 13, 2019 [Credit: ISNA]